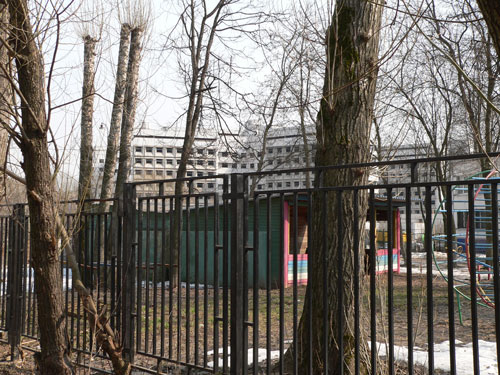 This is a Maternity Hospital located just outide of Uji station in Kyoto, Japan. I took this about 9 months ago. It reminded me of something that would be abandoned, should be abandoned (being right next to the train tracks) and covered in vines and weeds. However, I don't think it actually is. It's just not like the Japanese to have unclean buildings...

Hi, this is my first post. I discovered this community the other night and after staying awake into the wee hours of the morning sifting through just a few of your amazing pictures I was inspired to go out and explore my first abandoned place. Clearly I'm new at this and a complete amateur with a camera, so be kind. :)

So anyway, there's this stone house on the way out to Woodbury (one town over from where my parents live in Watertown) that I've been obsessed with since I first drove by it when I was 15. All throughout high school I had friends in Woodbury so I was constantly driving out there, almost always at night, and this decrepit, half-built, fascinating house was the landmark letting me know I was finally almost in town. My dad seemed to know something about it back when I first noticed it, so yesterday before I went out there I asked about it again.

With all this in mind I headed over. The weather was extremely mild for Connecticut in January (52 degrees!) so I figured it was the perfect opportunity to do some exploration. I got some pretty good shots of the outside for not staying very long. The house is situated on a rather deadly curve on a road where all the cars fly, and since I was wary of the No Trespassing sign I tried to stay off the property (yes, I am that lame because I'm new at this, but also I had visions of some crotchety old gangster suddenly jumping out at me with a rifle) and really didn't want to get hit by a car. And, I had a healthy dose of the creeps. There were blankets of fog everywhere on the ride over, and the house isn't that far from this cornfield I've been creeped out by before, thanks to a midnight drive by when the stalks were high and I was listening to a song involving ghost girls and wolves in the corn... I have an overactive imagination. But I digress. The point is I was way too chicken to try going inside, but the house itself and the yard were interesting enough. Maybe sometime I'll go back when I'm not alone and actually try going inside. The infrastructure looks safe enough.

Sorry the pictures are all different sizes, I had problems with Photobuck resizing all my pictures...

I thought everybody know [this place], so I didn't even think of posting it to the community.
But when

cheshirckij_kot posted some photoes, and nobody even know where it is, I think I can post some shots of mine.

So here is the place - an [abandoned hospital] in Moscow, RF and some shots I've made there. Sorry for my poor english.