Hi- I'm new here. Still figuring out how this site works. I love everyones photos here! I am artist but only an amateur photographer, taking lots of photos of my decaying environment. I live in Hudson New York, a very tiny, once-abandoned Hudson River city, now experiencing much gentrification. I collect and archive old wallpaper that I gather from decaying buildings or buildings getting gutted for rehab. Then use it for my artwork.

This photo was taken around the corner from me in a house long empty but being renovated now. I have a whole slide show but don't know if this site would accept it.

found this community through my lj friend

a couple weeks ago on a trip to alaska some friends and i pulled off the side of the seward highway (to use the bathroom) and found this abandoned cabin down a random dirt road.

the odds of us finding it were pretty astounding and look at everything that was in there!

among what was in there was a magazine from 1980 with an anchorage address that we decided to drive 40 miles to return to its owner. she didn't answer the door so we left a note with the magazine at her doorstep. still haven't heard from her.

more of my alaska pictures here.

thanks for looking, and if anybody here is in the arizona area and wants to go exploring drop me a line, i'm very down for urban exploring.
:]

Want to know what a Tweezle Jack is?

Find out in my Livejournal.

Pal's Music operated out of this building, originally Hattiesburg's Western Union office, for 29 years (opening in the mid-40's) The store has been empty from about a year after the Cloverleaf Mall opened in Hattiesburg - or since the mid-70's. The Chicago record we found in the store was released in 1972, and the Joe Simon record was released in 1976.

"It was one of main music stores in South Mississippi," Angela Fokakis Bostick, daughter of owner Nick Fokakis, said. "A lot of famous musicians promoted their music there. Elvis Presley was one of them. So it's quite a historical building, and a sentimental spot for a lot of older people." On Friday nights, she said, teenagers would gather to buy records for the weekend. "It was the place to be," she said.

It appears that somewhere along the line, someone hoped to restore the building - the windows upstairs are newer windows. But the long empty building's decline was hastened by Hurricane Katrina.

We made an unexpected (and really neat) discovery around at the back of the building! 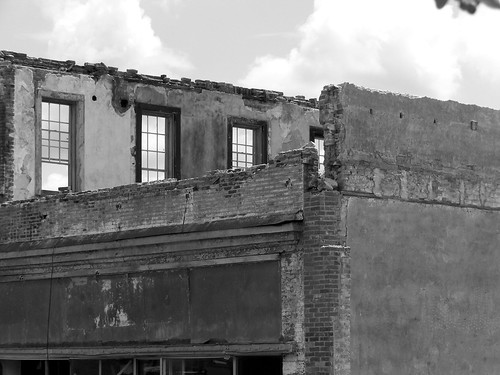