Hi, long time lurker, first time poster, so sorry if this question turns out to be inappropriate...

I was just watching Bob Vila's Home again and they were featuring the Elm Court estate in Lenox, Massachusetts, it really didn't get my attention until they said that the place had been abandoned from sometime in the fifties until just recently(I use that term loosely as I don't know exactly when the show was filmed, but it seemed to imply that it was some time in the last 8 years), when the family began renovations. Anyway, it piqued my curiosity as to whether any of the east coasters on here had urbexed the place previous to this and if they had photos? the few pre-renovation shots they aired left me craving more... (and wishing someone would wire Bob's mouth shut! Does that man ever shut up?!)

So, anybody got'em or know where to find them? I would REALLY love to see them! 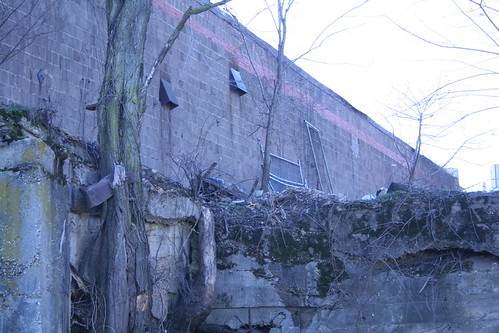 Here are some shots from my second trip to The Salton Sea.

I dont think anyone has posted this before. I was itching to go out and shoot something and I thought of Middletown, MD. There is this old abandoned building I wanted to shoot. Well, I got it, but forgot that we were in the mountains and it was sooooo cold. But here are a few pics anyways. :)

wulfwalker and I to the town of Central. There we found the abandoned Central Roller Mills. This grist mill is documented to exist in 1919 edition of 'Reports and Resolutions of the General Assembly of the State of South Carolina". A small sign indicated that the building had either been an antique store or housed the belongings of an antique store. The doors were secure so the pictures we took are of the exterior. This bit of industrial history did have treats for the eye.

All 74 pictures of the Central Roller Mills are in this flickr set.