And again, two more black and white. This one I haven't posted before; it's this random abandoned...THING...just over the Virginia border, after crossing over the Potomac River. It's one of the coolest things I've ever seen.

And this is that questionably blown up house, again.

Sepia tones courtesy of my scanner.

These pics were shot on two days with very different weather conditions.
This is about a block east of my brother's house. When he first got the house, this house was basically his only neighbor, because he bought the house while it was still being built, and nobody else in his development had a house that was even started.
There's now a road separating my brother's house from this one, and the neighborhood my brother lives in has erected a wall to block some of the traffic sounds.
Apparently, about 5 years ago, the old man who owned the house died, leaving specific instructions in his will for his kids not to log the forested parts of the land, among other things...but his kids are douchebags, so it's been logged, a building on the property has been taken apart, and the house seems to be full of cobwebs from what I could tell outside.
I haven't tried any of the doors yet, because the douchebaggery of the old man's sons is apparently of the "very unfriendly" sort....so I tried to be quick about shooting the exteriors while I was trespassing.
I may make an attempt to get some interiors later this week, but I also have a big post coming soon showing the gradual demolition of the Evergreen Airport, which was down to just the tower on the 7th(R.I.P.)
Anyhow, here's the farmhouse..
( Collapse ) 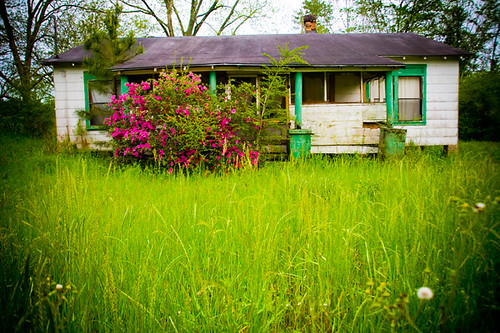 Isle of Mull,  one more time. Isle of Mull, one more time. Mac Leans, come back!

Hi there. long time lurker, first time poster. My wonderful camera broke, so ive been left with my dinky digital. Hence not the best pictures. But I guess these will have to do.