A one-story old Florida crack motel and a school for travel agents complete with dorms. Here are a few decent shots. 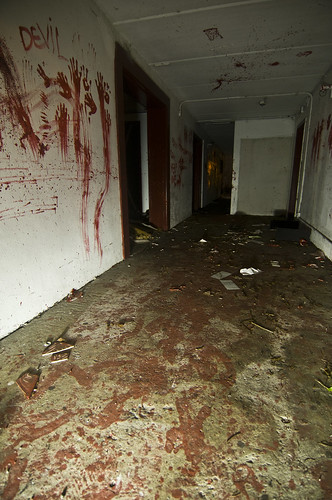 This place is a ten minute drive from my house. They're building condos on the property and this is the only building left that hasn't been ripped down. Originally it was going to be restored (for what purpose I don't know, I can't imagine it being converted into condos, it really was a house of horrors over the years... google "Woodlands School Survivors BC" if you want a clue) but that seems to be in limbo now. There's the odd skid of construction supplies lying around the site but that's about it. It was fenced off so we couldn't get in. We did see a security guard who was nice to us but wouldn't give us a guided tour inside.

Anyways, stories have surfaced over the years of staff abusing patients. There's a cemetery somewhere on the grounds and apparently the patients who died at Woodlands weren't exactly buried with dignity, not to mention staff would steal their headstones to use them for a barbecue pit.