I've been keeping JJ updated, so I thought you guys might want to hear this too. Earlier in the year, JJ posted the photos of a little bungalow in Palms, California, that had been neglected and left to rot. As I pass this house on the way to work four days a week for almost a year, I see a lot of it. One day I noticed the side door had been broken open, so I called a group of explorers into photograph it.

You can see JJ's posts here and here (the photos were posted to this community too, if you want me to change the links I will).

So one day, I notice a sign has been adhered to the house. The property has been taken by the city; the knee-high weeds have been cut down, and the junk cluttering the outdoors has been shoved behind the house. I'm worried that the house has a date with destiny and a date with the ground.

A few days ago, on my walk to work, I stop in horror. The endless debris, crap, junk, and trash inside the house is all on the lawn in a HUGE pile. As I work in a photography department, I borrowed a camera and took some shots...and ran into the owner of the house. Turns out, the young man I spoke with is the grandson of the previous owner. The grandmother died first, and the grandfather held onto the property until he died. The house was forgotten, and fell into disrepair. The grandson, whom I think is named Larry, lives down in Long Beach but was looking to find a place to move into with his girlfriend. Their parents brought up "the house", which the kids had no idea existed.

The house's future? A white picket fence. A huge dumpster is sitting in the lawn, full of crap. The recycling bins are full. You can smell the rot and mold from the sidewalk. Construction crews tore out the metal grates over the windows, and replaced the glass. Paint will come, as will a new roof. The meters have been turned back on; for the first time in months, I saw light from inside. The couple plans to renovate it, and move in; if not, they will rent it. It will not be torn down!

I was able to take, with permission, a year book from 1986 and a pair of Japanese fruit knives from the trash, that I will try to photograph later.

If this is too long, I can cut. I thought everyone would enjoy to hear one happy story! 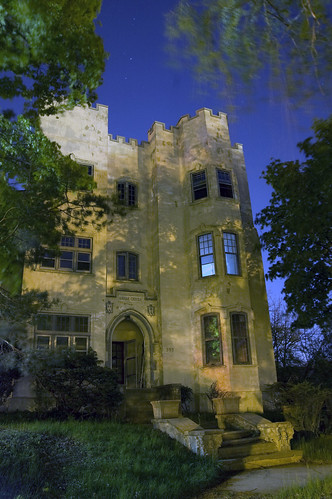 Sitting nestled back a few meters from the street is Barra Castle (Kitchener, ON, Canada). Built in the 1930s using the Neogothic style this apartment structure features large units, even the basement ones. High ceilings, gold leaf details, beautiful detail, and hardwood flooring. However last year a fire damaged several of the ground floor units and the building was declared unsafe. One business man purchased the property taking out a mortgage in an effort to restore and rebuild the castle. However the city shut him down and out of the building.

However like many such buildings other people have taken up residence is the relativity clean and safe upper floors. It's a shame to see this beautiful building fall into shambles.

If you've ever seen the film 2 Fast 2 Furious, then you may remember the warehouse scramble scene. This is that same warehouse. Nothing epic here, just wanted to post some of this graffiti. The art on these walls was quite good. It's in a sketch as hell (tm) part of Miami. 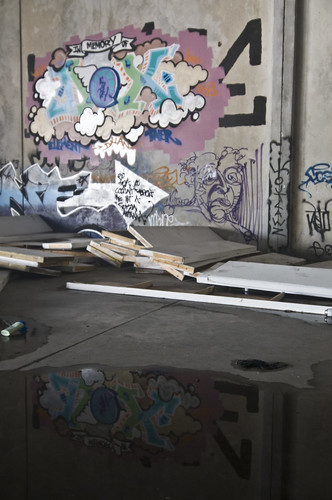