( Collapse )
Usually we post stuff about the places we've been, so I'm sort of doing this. RL Hearn, an abandoned power station in toronto's Portlands. Yesterday, the site of a major rescue operation and a reminder to use, the people who explore these places that it is dangerous.

Taken from the Toronto Star...

It took firefighters almost three hours to rescue a 27-year-old man who fell three stories off a conveyor belt into a hopper in an old shutdown coal-generating power plant this afternoon.

Just after 4 p.m., Toronto police, emergency services and firefighters were called to 440 Unwin Dr. just south of Carlaw Ave. and Lakeshore Ave. E. for what was called an industrial accident.

Police said when they arrived, they learned the man had been trespassing.

Over an hour after the man disappeared into the hopper, police and firefighters were able to locate him but had trouble getting him out.

Around 7:30 p.m., two firefighters were lowered down into the hopper with a rescue basket. While the man was pulled out of the funnel-shaped bottom, he lost consciousness.

As a precaution, he was taken to St. Michael’s Hospital under emergency transfer. Although police could not confirm the extent of his injuries, he is expected to survive.

The plant was the former site of the R.L. Hearn Generation Station, which was shut down a few years ago. A new plant is being built adjacent to the building but this particular site is no longer in use.

Signs warning trespassers are on the chain link and barbed wire fences encircling the entire compound. And although the property is watched by a private security firm and has a main guardhouse with a security guard posted all the time, police say it is common for people to come onto the property, cross the conveyor belt and climb a smokestack that leads to a beautiful view of the city.

Another Story and Video from CityNews 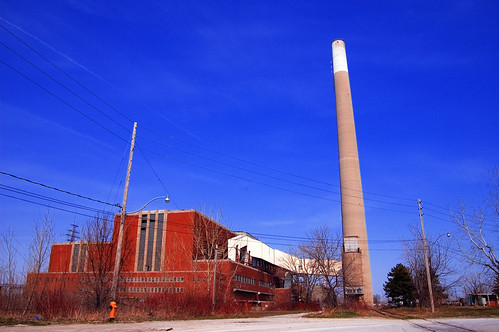 A reminder to please be careful in these places, I don't want any more injuries or deaths. :)

It's been ages since I posted in this community, due largely to real life issues that kept me from having the time and energy to go out exploring. (Plus my main exploring partner had a baby, who is adorable but rather attention-demanding. :) But since stuff has settled down for both of us, we're looking to get back into exploring.

I know this community isn't largely used for requests, but considering how lovely you've all been to me in the past, I was wondering if someone could help me out. We're looking for new places to explore, but given the horrific price of gas these days, can't really afford to traverse outside of a certain radius. We're looking for locations in the northern CT/southern MA area, and any suggestion would be greatly appreciated. I can most definitely return the favor about any place I've been to. (In that area, I've never really traveled outside to explore... yet...)

I'm cool with the whole "no locations in a public forum" bit, so feel free to email me at heathery.snicket@gmail.com.

To keep from making this post completely devoid of pictures, here's one I don't think I ever posted (I have a ton I need to dig out, organize and post from about a year and a half ago...):

the boi and i went on our best photoventure to date yesterday. i had glimpsed a fabulous industrial building of some sort just outside of jefferson city (our state capitol) several times, and longed to explore it, and so we did. we went in absolutely "blind"; we had no idea what the site had been for nor any of its history. this made for even more fun and confusion as we tried to figure this out. once we got home my husband the google wizard found information for us.

our site was originally farmland, but was turned into a womens prison in the mid sixties. in 1993 the missouri river riotously overflowed its banks and flooded it to the second floor. apparently staff had moved supplies and equipment to that floor and managed to evacuate all the inmates to other facilities without incident. they had intended to clean and repair renz and return to it, but the loss was too great. even the 15-foot razorwire fencing surrounding the property was washed away. the water rusted the locks and hinges on the door and gates, and those disappeared too. the damage is eerily evident today; the first two floors have the feel and appearance of a sunken shipwreck. there is a thick coating of silt everywhere. rust abounds. steel beams bend at crazy angles. you can even see the water level on the second floor walls.

renz included one main building, another building behind it housing cells, solitary confinement chambers, a cafeteria, and possibly either a ward or a gymnasium, a water tower, a power house, and a factory with recreation rooms and a library on the second floor. it could house up to 550 inmates. today it is privately owned and being reverted at least partly to farmland. it has also recently been used for police tactical training. needless to say i took a lot of pictures. there are over 200 on my photobucket account here; if you mouse over the accompanying text you'll get my written narrative. even if you just have a glance it's worth your time. inside it looks like area in Half-Life or STALKER game.
photos inside
Collapse