I didn't take this photo, nor have I ever been there, but I found this story on the internet and felt it was interesting and relavant to this group.

This pillar is all that remains of a great farmers and slave market in Augusta, GA from the 1800's.
On February 7th, 1878, a tornado destroyed all this market except for this one pillar.
Many stories and legends offer insight into why this lone pillar remains.
One story says that a Preacher was denied to preach there, and because of that, he cursed the building and claimed that someday all of it will be destroyed except for this pillar.
Another story says that slaves were chained to this pillar and whipped, and the ghosts of these slaves cursed it.

It is said that anyone who attempts to move, destroy or even touch this pillar will result in death.
There's been many reports of bad things happening to construction workers who were involved in plans to move/demolish the pillar.(Not necesarily death though)
And then there's the story of the man who drove his car into this pillar, and was found dead in his car even though he had no injuries and there was no substantial damage to the car.

While I’m taking a break from unpacking the household, I thought I might offer something new site wise..

In June, just prior to my relocation east to Alabama, I had the pleasure of going on two hunts with the new

fynoda. The first site we found was but by pure happenstance. “The Oasis” campground was one of many 1950’s and 60’s era canyonland ‘resorts’ that catered to Los Angelinos who wanted a place to park a trailer and spend a relaxing time away from the city. Based on what we found there, the site apparently closed as a resort in the mid 1990’s, but it continues to be lived in by some families. While we stuck to the old sections, once we discovered this, we promptly left. Here’s what we saw before departing.

From a sprawling campus, smattered with active buildings, here's one from the inactive list:

After several people told me not to be so afraid of cows, I went back to the abandoned farmhouse I found earlier this month and had a look around. (I took my spouse just in case y'all were wrong and I ended up stampeded, but largely, the beasts could not have cared less.) 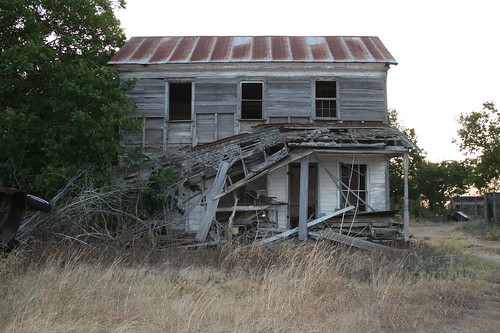 It was foul, but very interesting. The house was too structurally unsound to go inside but I got some good pics of it and all the abandoned stuff behind it nonetheless.

On 7/12/08 I revisited an abandoned site that had previously scared me off. Previously on 1/5/2008 I wrote about the "Bad House in Clinton" with the following excerpt:

There is a two story house in Clinton SC. This location was last used as an apartment building. I first visited the property over four years ago. Back then it had a ‘for sale’ sign in front of it and I was not into photography. I inspected the house and noticed that there was structural decay and signs of squatter use. Flash forward to last year. My mate and I were driving through Clinton and I pointed the house out to her. She did not like it, sensing something “wrong” with the structure. After much debate I decided to photograph the property. Today I did take pictures of the outside of the house and never got to go inside. Part of me did not want to, but the desire to find that killer abandoned place drove me. Maybe my angels were looking out for me. A police car drove through the drive-through of the KFC restaurant across the street from the bad house. Then another police car pulled up and an officer went inside the KFC. I took the pictures outside the house and then decided to move onto other places when another police car pulled up to the first.

Well, on a lovely Saturday morning I returned to the house. This time I did not have fear of the location. Inside I found signs of classic building abandonment, squatting, and an urban gathering place. Fortunately nobody was at home! This brings to mind an issue with exploring abandoned locations. Some locations are used by squatters or perhaps worse. Besides backing out slowly (or perhaps running), what else do you do for safety in potentially dangerous environments?


Click on a picture to see a larger image.