( Collapse )
Camp Bison was once part of the much larger prison farm of the Burwash Correctional Center, located about 50 clicks south of Sudbury. Built in 1914 (Bison itself was built in 1958) Burwash served as a low security prison. Bison was one of three prison camps, the others being Main and Spruce. The entire center, including the village of Burwash (used to house the staff of the prison) was built by the prisoners. They also maintained all the equipment, and grew/raised the food that they ate. Burwash was shut down in 1975, with most of the buildings being removed between 1976 and 1987 until only Bison remained. In 1990 the Department of National Defense purchased 8000 acres of land for military training.

I visited Bison on the Friday of the August long weekend, and got soaked getting there. Since Bison isn't active anymore, the roads to get there aren't maintained, and driving a Cavalier I had no hopes of driving there. Myself and a friend slogged through a five kilometer hike through near swamp like conditions. But I think it was worth it. If you do take a trip here, consider ATVs or Horses, and go during the day! We faced twilight and it was dark and raining (again) by the time we got back. 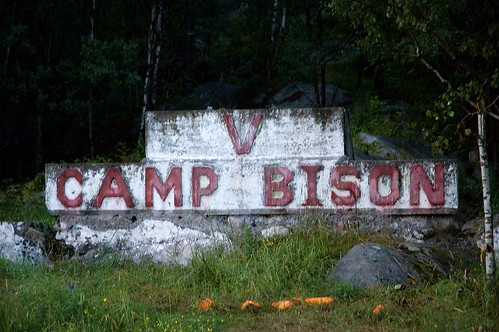 The other day I was hanging out at work/after work and drinking some of Bullet for my Valetine's beer, which was Corona, in the dressing room. We were pretending to be rockstars! Then we went out back to where I hadn't been befor. Where Lemmy would hangout or BillyBob befor a show. But anyway-right behind there is a big wreckage of what use to be meatlockers for a meat packing plant. The other side looks spookier w/ its big metal doors. That's the side I will need to take pics of. I see it all the time when I have to clean the back parkinglot. But this is what I saw the other day. This is what the rockstars see

Hope this one came out fine. This backside is like total wreckage. It was too dangerous to crawl on!

badgerphone and I visited the Los Angeles Zoo and happened upon....AN ABANDONED SITE.