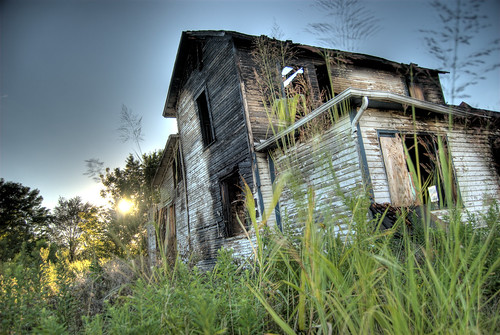 You guys know the story of Centralia. (if you don't learn about it here: http://www.offroaders.com/album/centralia/centralia.htm )

It's one of the most famous Ghost Towns in the world (I kid you not).
I got a chance to go this weekend- since it's only an hour away from where I live.

To give you a summary, back in the 1960's- Centralia had more than 1,000 residents. The town is in Schuylkill County, a county known for it's coal mines. When the town decided to burn trash underground- the fire never went out. The fire burns to this day. Because of the possibility of sink holes, many residents evacuated. To this day, 7 residents remains. The effects of the underground fire are prevalent in the huge cracks in the road, the dry texture of the foliage around, and the smoke rising from vents in the ground. Rocks are warm to the touch- and the air smells like sulfur. I myself received quite the migraine wandering around.
There are two cemeteries that are still well maintained by the residents who lie there.

The underground fire would take more than a billion dollars to put out- and that may not even work. They estimate the fire will continue to burn for thousands years or so. A very long long time...


I have a LOT of photos to share- so hang in there! This is a sign from the abandoned "cross garden" located in rural Alabama, north of the state capital in Montgomery. Built over the course of 30 years, the man started putting the signs up after the death of his mother in the late 70's. The rusted signs, scrawled with lettering in red and black paint, line the roadway. He died in 2004 and his family left the washing machines, air conditioners, and pieces of tin in place.