The factory, not that deserted, not that is not present. Faster the second. Territory rather alive. At all not looking at day off, people periodically went there - here. There are dogs who too stroll. Rather big territory, is on what to look.
Somehow it was not pleasant to me. Second time would not be desirable to come back there in any way. My first photo shoot. These photos were taken on an overcast day at an interesting site off Duke Street in Liverpool. A curious aspect of Liverpool is the amount of dereliction woven in between busy areas and well-maintained buildings. This site is an example of such 'hidden dereliction'. Please excuse the poor photo quality; I'm a novice, and I use my mobile phone as a camera. 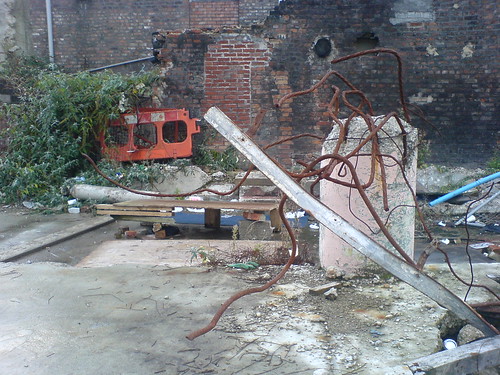 Which is ironic, because we never actually ended up on the road to Russell Gulch because Central City, Colorado, can't properly label a street that doesn't have a casino on it.

Also, Volvos are not made for mining roads.  I still tried and made it and without any (as yet) visible damage, but there were a few tense moments.

My partner on the journey was wearing boots that with her pant legs down looked remarkably like black ballet shoes, but I didn't take pictures of those because, well, they weren't abandoned. ;)

No engine, but if you were only running a 4-cylinder, you'd drop it, too.

At least the tank was full.

Oftentimes in this community, I see a lot of, "How do you find abandoned places?" or "Does anyone know of any places near x?"  I see some amazing abandoned places, too.  About as many in the community as I actually see and don't post about. ;)  Most of these questions originate from folks here in the States, but unfortunately, a lot of us feel the (rightful) need to protect these places from becoming the Times Square of the (our) community, or themselves from prosecution for trespassing.  I'm in a unique position of having a job which requires a lot of travel and gives me the freedom to go exploring when I'm not working.  The result is that I've driven quite a few Interstate miles, many of which have proven quite scenic, but my heart lies with our country's original Interstates--the U.S. Highway System.  These routes started as early as 1910, with the bulk coming into existence after 1925.  Therefore, most of the abandoned structures you'll find along these routes will date after 1925, but some of the routes were already roads that were improved and brought into the system, so you may occasionally get lucky--especially in the east, where this continent has had settlement by European descendants for longer.  For the most part, though, without a dryer climate, all that survives after a few decades is some foundations and cellar pits and not much else.  See the bogiron towns of New Jersey's Pine Barrens as an example.

Some of my favorite drives also include abandoned places, which will be included in a series of posts.  These include US 6 (which is the starting portion of Colorado's Peak-to-Peak Highway--CO 191, and an amazing journey through Utah), US 30 (the Columbia River Scenic Highway portion), US 89 (and AZ 89A), US 91, US 101, US 199, CO 14 and 27, the Blue Ridge Parkway, US 22/322, to name a few of my favorites.  The number of abandoned cars, buildings, settlements, and such along them is simply astounding.  And I don't just mean beat-up shitbox Dodge Caravans that couldn't make it up the hill or towns that are empty on a Sunday morning.  Anyway, my point was that a lot happened along US Highways between 1925 and the creation of the Interstate Highway System in 1956.  40 years is a lot of time--a lot sprung up on US 66, but also on the more mundane routes like a rural Main Street--that has since been left to the hands (and in some cases, sands) of time.

Anyway, my advice to you next time you're looking for a new place is to grab a $5 Wal-Mart Rand McNally and start driving the nearest US Highway.  Recently, I've also discovered and fell in love with GhostTowns.com because it knows stuff I don't.  Being the first to "discover" a site isn't important to me, so knowing I'm not the first doesn't bother me.  I've found some remnants that aren't large enough to constitute a town from time to time, so there are gaps it doesn't cover.

Originally, I'm from the East--Reading, PA, to be exact--though these days I live in Colorado (wonderful group of urbexers out here).  The local abandoned places I knew in Reading, I was confident enough to explore.  Out this way I'm a bit more wary of the indigenous fauna (which always seems more likely to kill you) and the indigenous population (which also seems more likely to kill you).  No, really, I can't count how many times I yelled at my guest/companion in my latest forays, "Where are you going?  Don't blame me if you come back with your face missing."  Generally, I expect people to be more forceful about protecting their property out here, despite the fact that they're generally very courteous and helpful when you're not on their property.  So far, I still have my face, but so does my companion and she went farther afield than I.

Which brings me to my next two subjects:  Safety and Trespassing.  They can't be underscored and stressed enough.  Easiest things to do are always make sure someone knows where you're going and when you'll be back and if you're going to stay exploring (let's be honest, who hasn't stayed longer than they expected?), just give 'em a heads up.  Doesn't have to be mom, but should at least be someone who'll call 911.  Always have water and a first aid kid, at a minimum.  Kit's not gonna save your life if you're at the bottom of a mineshaft or a well, but it may be able to help you hold on long enough to get out.  The

volvolovers community probably would thank me to say this, but don't take a Volvo off-roading.  Try taking a vehicle that's appropriate for your explorations.  Just like you wouldn't wear sneakers most of these places, even all-wheel drive has its limits.  Always wear boots.  Seriously.

Never get caught trespassing.  You shouldn't trespass in the first place, but in this group that's like telling you not to breathe.  It's gonna happen, so if you are, don't damage anyone's property and treat it with the utmost respect, as though it were still inhabited and someone else's home.

Which leads to the next thought:  Leave nothing but footprints.  I don't get the idea of geocaching (even though I've participated), but don't geocache an old refrigerator.  That's called dumping (or fly-tipping) and is illegal.  You should also take nothing but pictures, but let's face it, we've all seen something we've thought of taking (and some of us have).  I used to pick up old railroad spikes when walking along the tracks--both acts are illegal.

Apologies for being so heavy on the exposition.  Should be lighter from here on out!

I seem to be posting a lot of mines, but it's unintentional, I swear.  Then again, the Southwest is rich in mining history.

Saw this on the way up to Pike's Peak.  Swore I'd stop on the way back.

I swear, right after this.

It started with an old wastewater treatment plant... somewhere... in North Carolina.  No, really, I don't remember.  It's off I40 east of Asheville.