Ended up seeing some trucks here which spooked me so this set wasn't quite what I wanted but here it is...

Abandoned Orphanage
Circa 1988-9
Minolta 35mm
Tmax 100
Scanned Neg
The Newark State school has probably been one of my more favourite explorations to date. Don't get me wrong, I love industry, but I love my institutions.

Newark Custodial Asylum for Feebleminded Women of Child-bearing Age became a reality in 1890, with a capacity of 600 women. By 1918 the name had been changed to "Newark State School for Mental Defectives." In 1922 the admittance was opened up to girls as young as five.

The final name change occurred in 1927 when the name of "Newark State School" was finally adopted.

The boys division was opened in 1932. During the '60s many patients were transferred over to the Sampson Annex at the nearby Willard State Hospital. Despite this over-crowding remained an issue to the school.

Many buildings on the property remain active, but several sit abandoned complete with expensive equipment left over. 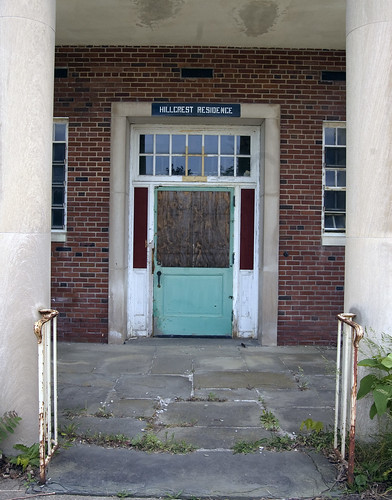 ( Collapse )
As a follow-up to the two AMAZING sets of photographs of the TB hospital (one of my favorite abandoned places), I wanted to post my own - these are definitely amateur, but hopefully of interest to someone here...

P.S. Anyone in the Baltimore area interested in meeting up for some exploration? I don't get to explore as much as I'd like because I don't really feel comfortable going into abandoned buildings alone, but I do know of many locations we could check out.