This is a largely abandoned cemetery just off the road along the east side of Lake Springfield in Springfield, IL. None of the graves are newer than the 1960s, and it's only being kept mowed by the roadside crews. It's called Newcomer Cemetery because the bulk of the graves belonged to the Newcomer family that used to live nearby, and not because they buried newcomers to the Springfield area there. Ha.

Hey everyone... kinda unusual to see such a group exist on LJ... but.. oh well, it seems as though a lot of people have the same common interests.

I'm from the Metro-Detroit area.. I've lived here all my life... but recently gotten into the wonderful world of 'urban spelunking'. I enjoy it... from things such as just walking over history, to imagining what these buildings used to be like in their prime.

First off for me is Michigan Central Station. Also known as Michigan Cental Depot, MCS, MCD, Michigan Train Station.. etc. Its been around since the early 1920's.

Michigan Central Station has been my unicorn for living in the Detroit area. It stands tall, in very good structural shape, however.. the lack of funding from anyone has given it a old eerie feeling as anyone drives by it. You might also recognize it from a movie. The latest movie of Transformers used this building.

2nd off is Packard Assembly Plant

Packard was an old automobile assembly plant. This building is freaking HUGE... it never ends.. and there is always something to see. I believe it was no longer used for Packard a while ago, and then one of the other Big 3 automakers took it over and used it.

Not much is known about the decisions here.. But there is a warehouse in Detroit that was used to house all of the supplies, textbooks, papers, everything you could possibly think of for the Detroit Public School system. Back in the mid 90's... they just shut this warehouse down. Didn't remove anything.. didn't do ANYTHING with it all. It has been subjected to almost 15 years of vandilism, theft, and time. All the supplies still sit there, all the text books sit there... some have been weathered, some have fallen apart, some have been examined... and a lot of the time a few of them have been burned to keep the homeless people warm. Its a small set of photos, but it is one of the places I want to go back to spend more time at.

If you click through there's a whole directory with more images. This house may have been posted here before, it's in such an obvious place... I don't know how long it's gonna stay standing, it's right off the interstate. Crazy. Note: These photos were taken by These photos were taken in July, just as the last.

They're not of any building or are that's particularly abandoned. Just a few little boats and shacks along the bay.

( Collapse )
A set of different old sites that I have been too.

I wasn't aware of this stately home's history until after I photographed it. In fact, I've known of its existence for over a decade, but only recently re-stumbled upon it. It was abandoned for several years and is still in that state, though is now on the market to be sold by the previous owner's lawyer, so please let me know if it technically doesn't fit the "abandoned" category anymore, thus not fitting for this community!

According to Amazon.com's synopsis, a man buys the home and a lot of mysterious things go on, such as sounds from the fireplace and faces in mirrors. He finds a secret dungeon in the basement and all sorts of creepy stuff, and uncovers some artifacts and records of "illegal rackets" in the Chicago and Detroit areas in the 30s. Also found is a jar of formaldehyde containing nine fingers, three of which are wearing an identical ring.

I'll leave the rest for you to Google, or you can check out the book titled "The Magnetic Mansion" by Forrest Haskell (I'll sure be picking it up next time I'm at the bookstore!). Supposedly it is based on true experiences of his, but the characters have different names. And it claims the house in Dexter, MI when in fact it is in a town about 45 minutes away from Dexter.

It is currently for sale (5,000 square feet on 20 "lakefront" acres for only $250,000!!!) so things are locked and sealed up pretty tightly, but I did manage to see the main areas of the first floor interior through windows.

Located in Mill Creek Park in Youngstown, Ohio. Idora Park opened on May 30, 1899 and closed after a tragic fire in 1984. The pictures i took of the abandoned park were taken in 1996.

Here are some photos of the park when it was operational: Bob Dyce Photo Collection

Here are the pictures i took: Pictures taken in 1996

This buildings are to become a new business center in Moscow, Russia. While they looks good now there are some rumours on construction suspension. So let's just imagine how could that be.

Hiii, I'm Jessika Spooky [or Jessee, whatever you prefer] and I decided to join this community because I've long been obsessed with all things spooky and abandoned. I live in Jacksonville, Florida. I've passed a lot of abandoned buildings around here, but I never *quite* remember where they are, or ever really have a group to go in there, considering I'm five foot two and ninety pounds, I don't think it'd be wise to go wandering alone... Anyway, if you know of any places in my general area, I'd LOVE to know where they are. Except School Four, considering I've been in there a thousand times and I've nearly had enough of the place. Neh! :D

also, I really hope that this is acceptable. I'm sorry to the mods if it isn't, but considering my lack of knowledge of local buildings to explore, I've few pictures to share. sorry!


one of my favorites from my BFA thesis series...i'm graduating in the spring. my series focuses on Detroit's current social and political landscape by means of documenting the physical remnants that stem directly from, or influenced by  the '67 riots. 35 mm and 4x5 film capture. i'll eventually have a website up with all of the series...

This is my first post and its not even mine; lame, I know.
I found this on bookofjoe and have no idea If it's been posted before. Anyways, photos are amazing and you should definitely check them out. References and complete history are here.

Caption: Special lightweight small atomic reactors were produced in limited series to be delivered to the Polar Circle lands and to be installed on the lighthouses.

We went out to the kids house today to check on it. they are coming home next week after being gone for 2 1/2 months. Here are some pictures we took of the neighborhood. They live about 3 miles away. Along the way there were many abandoned barns and shacks. The first two are of the mountains then the buildings, Enjoy!

romanfeatures who I met off of this community. I've done this place to death so I was on a mission to try and take pictures of things I had never seen before. I did have to revisit some old favorites though.

A revisit to the cabin in the woods (posted HERE) lead me to be more observant - and see an easy to enter without any damage done.

It was worth seeing... 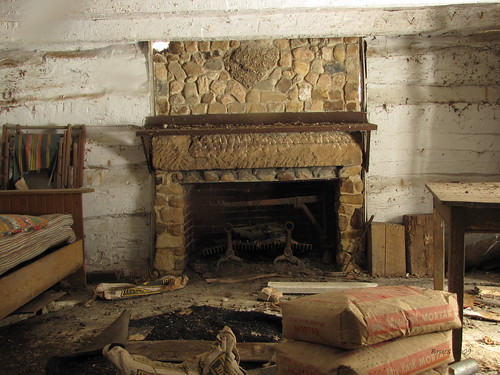 ( Collapse )
I found this group yesterday. I absolutely love abandoned places. There is a story to discover. The past almost feels like it echos down empty hallways and through the rooms. I am from outside of philadelphia pa.

I hate to tantilize people with promises, but i have so many pics that i have taken over the years (if i weren't so freaking unorganized i'd post them now.lol) I have been to an abandoned mansion that used to be a colt (from what i've heard). An abandoned greenhouse. I have found (but yet to photograph) a row of 3-4 houses hidden in some woods down by the also abandoned franklin mint (i can't get in there, they still hire guards to watch it even though it's empty). In fact that area is a gold mine,.. and i really need to get out there soon. And the absolute best find that i have yet seen was an abandoned school/hospital thing out by penn state brandywine campus. It used to house something like a thousand people or so. There are like 15 buildings including an old chapel. I didn't have my camera when i found it... but i am definitely going to go there come spring. So expect a bunch from me in the future.lol Right now i leave you with this....

This is the abandoned greenhouse (i'll post more if you want)

This is one of the rooms of that mansion...

So, it's not exactly an abandoned place, but I had a day to kill in Rome, GA, and came across this beautiful graveyard and Civil War monument. There were some really neat gravestones. Pics can be found here.

Edit: the cemetery is Myrtle Hill.

2008
Sherman Avenue, Millville, New Jersey
Abandoned house very near to where I live.

A video inside the abandoned house where the previous photos were shot.
This old World War II pillbox is on Balmedie Beach in North-East Scotland, only half an hour away from where I live. I've always wondered about it. It has a huge swastika on one side and I thought it would have been from the War but wasn't sure. The wind has eroded the sand to reveal the deep foundations on which these pill boxes were built.