HI Everyone.
I've been lurking and enjoying your posts since this community was in the LJ Spotlight.

I have for you one of the most tragically beautiful theme parks in America.
Heritage USA, built by Jim and Tammy Fay Baker.
http://illicitohio.com/SBNO/heritage/heritage01.html

For those of you too young to remember the PTL Club scandal, here's the history.
http://en.wikipedia.org/wiki/Jim_Bakker

... sorry, no pics from me, but a link to a wonderful site. Maybe known by you, maybe not. Enjoy. It's worth a visit.

For those of you who saw my last post with the old pictures of our local castle in Kentucky. As I stated, the castle has since been remodeled and is now running as a hotel. Here's a link dedicated to the castle as it is now. It now goes by "Castle Post" after the Post family whom is running it. There are many pictures of it now on there. You can also make reservations on this page, however, that won't come cheap as rooms start at $1,000 per night.

i have a confession, although i have not yet taken any photos of abandoned buildings, i do have an interest in photos of them.

what first got me really interested was browsing the web some time ago, when supposed to be doing uni work and i came across this website:

and i have been looking at pics online. since joining however i have found myself looking for buildings to take my own photos graphs and am hoping to get some soon.

hope you don't mind me joining when i have nothing to offer, but thought i would at least share the website with you.
All Your Base

The Adult Occupational Centre Edgar wasn't always a government insutition for the lower functioning of society. In fact it was first built in 1952 as the RCAF Radar Station Edgar. It served for ten years as the southern most post in the Pine-Tree line, an early warning system of nuclear bombers coming to wipe us off the face of the Earth from Soviet-Era Russia.

But by '62 Technology, as it always does, advanced, and the equipment at Edgar was rendered obsolete. So the RCAF sold it off to the Ontario Government (for a price of a new home, and they sold a town!)

Rebranded to Adult Occupational Centre Edgar, opened in 1962. It operated as a place where lower functioning adults could learn vocational skills such as kitchen, wood and metal working, while living in semi-indipendance.

When the Deinsutionalization started rolling through Edgar was on the chopping block, operations ceased and the place shut down in 1999. It's now a ghost-town, guarded 24/7 - 365. Occationally used for Tactical training by the OPP and the DND. Also Canada's Worst Driver 3 was filmed here. 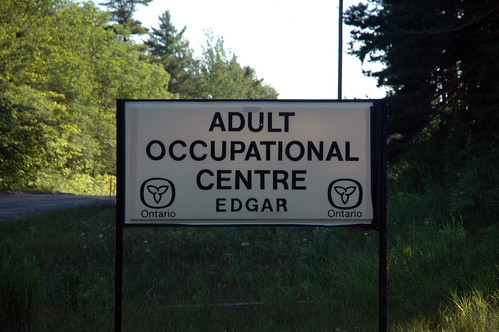 i haven't posted here for a few months. life ran away with me, i guess. i've done some location shooting, and thought i'd start with my favourite, visited back in october:

it took us hours to explore this enormous, fascinating, and very sad building. we were unable to find out when the fire happened, or why it did so much damage before being put out. it's almost as if the people living nearby don't even see the church anymore. it's ceased to be for them. there are about 100 photographs on my flickr. here are a ( Collapse )behind the cut. hope y'all enjoy. we certainly did.
Collapse