Built in 1919, this building served as a Locomotive Repair facility as part of a much larger staging yard for the Northern Railroad's Eastern Line. It follows classic design for such shops. It was later acquired by E. S. & A. Robinson (Canada) Ltd. in 1941 and used as part of their much larger factory on Laird Dr. The remains are a basement (see: last image in this set).

E. S. & A. Robinson (Canada) Ltd eventually was bought out and became Winpak. Winpak continued operations on the site until 2005. The site made brown paper bags

Currently the property is going to become car dealerships with the old section being retained and preserved, but converted on the inside into modern car and parts storage. 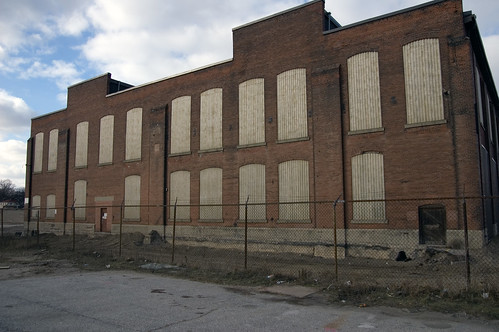 My sister took this photo more than a year ago. It's not exactly abandoned, no one lives in it but someone's taking care of it, probably the grandchildren of the original owner. I'm sorry I don't have great shots of this house, it has beautiful Spanish Colonial details on the other side. Here's a poor shot with our car on the side here's it's neighbor. Houses like this one are quite common in provincial areas. The main living area is on the  second floor, the first floor--the stone part--is where the servants do their work. I swear I'll take great shots of every old building I see when I get back. Hmmm... I miss the humid weather of the Southeast.

I would assume that most construction projects start with the building. Others, not so much.