Here are some shots of building of Norristown State Hospital, built in 1879. The hospital was Pennsylvania's first state inpatient psychiatric facility and is now the only one in southeastern Pennsylvania. The hospital was built in the "cottage model" (see Asylum architecture) with a number of separate structures. The hospital advocated moral therapy and limited restraint. In the mid twentieth century, there were over 4000 patients. The hospital now serves 307 patients in General Psychiatry and 120 in Forensic Psychiatry.

It is one of many buildings on the property, but it is the only one that lies abandoned. The rest of the asylum is fully functional as far as I can tell... the majority of the "older" buildings have all been demolished. This is the only old building still standing. 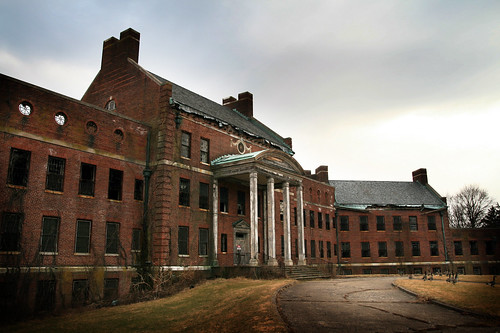 These pictures are of the ruins of the Sheldon Estate. The estate was one of many pieces of land that was donated to create Stony Creek Metropark in Shelby Twp. MI. The park has torn down all of the houses and structures and even dug up the foundations except for this one. There was a long hunt for a chimney that is no longer there and we were walking around looking for this house forever. I found out later that we were walking right over it, but you couldn't see the foundations because of the snow. I am going to have to go back in the spring. Enjoy.


The steps leading up to what was the house. I can't wait to go back here again and take some more pictures. I love this place-the sadness, the remoteness (is that even a word?), the general feeling of it. My S.O. and I have a trip planned over the next month or so to go back, and hopefully we'll find some more p