Padded around a house today I've seen in the past but never stopped at. I'm glad I finally did. It looks like around the 80s people just got up and left. Left everything. The oldest newspaper I found was from the 70s. The newest was from 1998 I think. 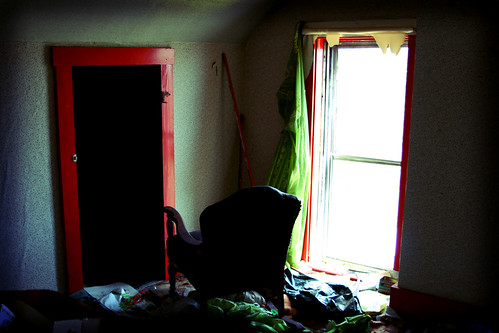 Since there seems to be a theme of abandoned schools this week, so I'll throw one of mine into the mix. This is a school built in 1910 in metro Atlanta, closed in the mid 90's. What's sad is that there are many schools like this, with ornate brickwor and a distinct character about them. They trully don't build them like this any more (especially with asbestos and lathe walls). The only building I was able to enter was an annex built in 1914, which was in a severe state of collapse in the middle, as seen in the buckling walls and ceilings in many of the photos. What was interesting here was the number of artifacts left behind--from desks to shelves to children's toys. I think the latter always the most interesting in places like this.

This is a disturbing trend that we as explorers / historians could run afoul
of. Be careful.

And a comment about the recent troll / anarchist attack

Yesterday I received a number of annoyed/frustrated/frantic/confused e-mails
and messages about the douche who tried to flame the community yesterday.
To the folks who messaged me and

furrinalia, thank you!
You did the right thing. This person violated more than a few of the
community's rules for posting and behavior.

This person is a troll, an attention whore and an anarchist who
didn't have a clue why most of us go into sites to photograph the beauty,
document the history and learn from it before the elements, vandals and
developers plow it under. This arse assumed that we were all out slumming
with our "expensive digital cameras and silver spoons" to see how the little
people lived. In their misguided view, they seemed to think that our
concern, interest and reverence for some of these beautiful and not so
beautiful sites were contributing to keeping these sites from being
demolished. They seem to think we're racist for appreciating and documenting
places.

They don't understand that we have nothing to do with the preservation or
destruction of sites. In most cases, our photos and stories are
the only epitaphs most of these places will ever see. Our explorations are
the last bits of affection and respect these buildings will receive.
Instead, this person advocated ripping out wiring, stripping the building
and burning the remains. They think that by destroying these sites, that
they'll spur new building and jobs. What they fail to understand is that
these buildings are cheaper to renovate and reuse than they are to rebuild.
They fail to understand that most businesses, developers and banks won't put
in a new project or building to replace a structure that's been vandalized &
arsoned because of the increased crime rate and threat that it will happen
again. Instead, the shell or ruins of the building remains, the neighbors
(if any) move away and the situation gets worse - not better. That is the
cycle which has been repeated over and over again in places like Detroit,
Gary, Philly, Newark, Oakland and Los Angeles.

Although I didn't think it would work, the New Orleans model for removing a
derelict / abandoned building and turning over the property to a neighbor
(if any) or selling it at auction has been successful. May if the troll
wants to do something bright, they push they'll push the leaders of their
community to adopt a similar program there.

In closing, we are watching all entries being posted and moderating entries. If someone tries to leave up nasty, flames or racist comments, ignore them and pass the moderators the user name.

EDIT
Ladies and gents, you've now seen the type person that we as a community are dealing with. He has shown all of community just how much of a trouble maker he is. Moreover, they've shown the level of ignorance in why we are here to begin with. At this point, I believe you as a community have unloaded on this arse and the point has been lost on him. This room is in a old farm house.  The house was not any different than thousands of other old farm homes in Texas, so I didn't post the outside. This room intrigued me though , because, that is a orginal oil painting in the corner of a mother and daughter adoring each other. It looks, as if the childs clothes are strewn around the painting. No mother would have left the painting behind. I have questions.