Here are some photos we took on our recent (May 16-18) vacation to Galveston.

These are the old Broadmoore Apartments, currently for sale. Most likely will face demolition once they are sold. These were here before Hurricane Ike and is still one of my favorite places to see on the way in to the island.
( Collapse )

Took a short trip down to the Salton Sea in Imperial County, California this past weekend. Our main interest was to see "Salvation Mountain," but we took a trip to the small town of "Bombay Beach" where a Marina had once been used. But because of the pollution and rising of the water, the port was destroyed.

DIAL UP USERS BEWARE!
Images are 700 in width.

If you are curious about the photos of "Salvation Mountain" I have a flickr set of about 158 images of the entire trip.

Its not super abandoned, the homeless have little tents and signs, and bedrolls stashed about, and someone was either inside the closed off walkway, up ontop because they yelled at me.

Here is a little back story, built sometime around 1934-1938 as a New Deal project this bridge and its larger steel constructed sister (For Rt66) a bit south of this one. Not sure if this was a Tijeras street bridge or a Grand Street bridge, ether way those 2 streets now have a larger newer underpass.

Now this only serves as dropoff for our convention center. In the process they closed off the other sidewalk, and attempted to entomb it. 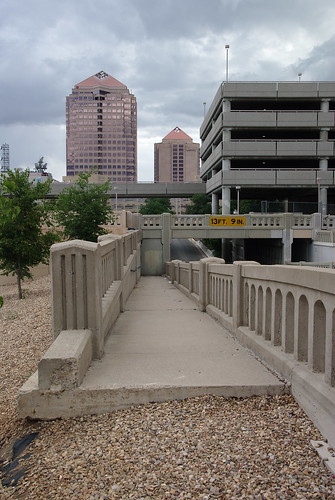