This past weekend we took quite the drive to visit the Bennett School for girls, an abandoned turn of the century school rotting away on a hill in a well to do neighborhood. It's a very well secured location and we had a tough time getting in. Once inside we saw why they were working so hard to keep people out. One of my fellow adventurers found himself halfway through a floor as we attempted to go deeper into the older parts of Bennett. For safety's sake, we only explored about half of the enormous campus.

A brief history of the location:
The Bennett School for Girls was built in Duchess county, NY in 1890 for use as a resort. In the early 1900's it was re-purposed and became a finishing school for young women. Courses included dance, art, music, literature, modern language and domestic science.

The structure was built with a traditional Victorian style, featuring ornate woodwork, shingles and stone work. The campus included stables, a chapel, a large library, gymnasium and dormitories.

In the 1970's part of the campus was renovated in an outdoor theatre and science building were built to comply with education standards. Unable to keep up with other colleges in the area, the Bennett School closed it's doors in 1978 and never re-opened. 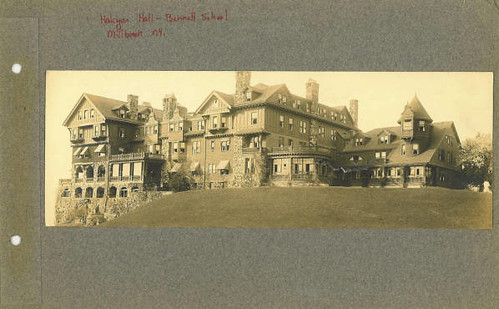 In an abandoned grape forest...

I posted about a week or so ago with pictures from the Rockefeller vacation home in the Overhills community near Ft Bragg, NC.
community.livejournal.com/abandonedplaces/1779189.html
That home is one of very many buildings on that property, now owned by the US Government :( However, it is free to those with a fishing permit because there is a lake also on the land. In this post I will show some of the other pictures that we took while visiting. & yesterday we ventured down another trail & found even more places that we are yet to get pictures of... Its amazing how much history has been here the whole time I've lived here that we never knew about.

This series of pictures are of the riding stables that are located on the grounds. One of my favorite buildings on the property. Hope you enjoy!

Enjoy the pictures & if you'd like more information check out: www.bragg.army.mil/culturalresources/overhills.htm
& there is also a book that covers the history of Overhills as a whole: Overhills by Jeffrey D. Irwin & Kaitlin O'Shea

One of two stables found at "The Hill"

What the Riding Stable looked like in the early 90s or so.
( Collapse )</div>

This place has been many things over 150+ years but the last purpose it served was being a Paperboard Factory. It burned down partially in the early 2000s and then they just gave up on it. Some of the buildings in the back date to the mid 1800s at least. The building I explored on this day was actually the power plant which was on the other side of the water and was once connected by a little bridge of sorts. This place used to be wide open but since last summer they boarded it up and have had guards on duty. Not really much to guard. Although recently it seems as if they may have given up again. I went by the power plant 2 weeks ago only to discover it was chained and boarded up. Last time I went I just walked right in. It was in good shape 2+ years ago. Then scrappers discovered it and tore it to hell. I watched scrappers carrying stuff out of it one day. The only way I saw in that was large enough for a person was a hole in the side of the wall. Problem being once you enter the hole it is 25ft down to the floor. There were some pipes and stuff but they were cut so they will wobble if you touch them at all. I wasn't equipped for this 2 weeks ago. But I decided to go back with proper equipment and give it a try. It would have been a lot easier with 2 people but I was alone so I kind of had to throw my equipment down. It wasn't a perfect landing as I got mud all over my tripod head. Then while I was climbing down I got spider webs in my hair, dirt all over my hands. It was probably the most difficult and dirty spot I have gotten into. I was mostly doing it just to say I could do it. But I spent about half an hour inside and here are the results...