Abandoned and empty for over 25 years, the Lyric (built in 1908 as a Vaudeville House) and it's adjacent office building are now in a state of arrested decay. The theater was purchased for preservation by a non-profit which owns the nearby and restored Alabama Theater. This summer, two assistants and I recieved permission to extensively photograph both theaters and the office tower adjacent to the Lyric. Using studio lights to illuminate the gloom, these are some samples.

"'We recently purchased a building in Queens, and while clearing out the basement we discovered a two lane manual bowling alley in very good condition. We did some research and this basement was most probably a club during the Prohibition era. Would you or someone you know be interested [in the space]?' 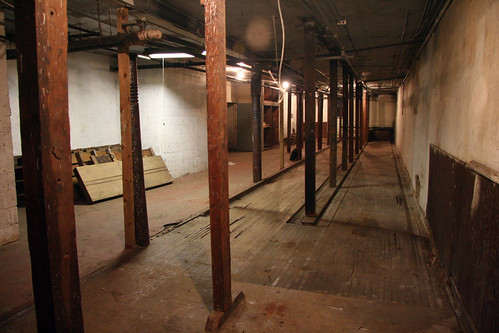 In 1909 the state of New York built
a facility for the aid and housing of the "feeble minded and epileptics"
Named after William Pryor Letchworth,
a key player in the creation of the facility and noted humanitarian of the time.

The grounds were set up in a college campus style.
Building were kept relatively small, and typically did not exceed two-stories tall.
They were all located within a relatively short walk of each other.
They all shared the hand-cut stone, arched-window, and stone column "Greek" aesthetic as well.

A large stream ran through the campus,
it served as a divider between male and female patients.
Letchworth Village also housed it's own power plant, farmland, waste disposal, and water supply.
Making it the first all-inclusive facility of it's kind.

Of the research performed there, one of the most note-worthy was the
development of the polio vaccines used in the Congo by Dr. Hilary Koprowski.
It was revealed that he had been the first physician to preform a polio vaccine on humans.
Those humans were twenty "mentally deficient" patients of Letchworth Village...

In the 1960's and into the 1970's Letchworth
Village began to badly suffer from overcrowding.
The then local reporter Geraldo Rivera created a documentary about the sad condition
in which many United States psychiatric hospitals found themselves.
Touching on issues such as over-crowding, neglect, and abuse...
It was titled: "The Last Great Disgrace"
Segments of the documentary were even filmed at Letchworth Village.
It was later turned into a nationally-aired documentary by ABC.

As expected, the public outcry from this was sizable.
This, coupled with the nations shift toward mental care on a smaller scale
(Such as group-homes, which is what ended a lot of these facilities lives)
resulted in the slow re-distribution of the patients of Letchworth Village.

In 1997 the last of the residents was relocated,
and the power was forever cut to the campus.

Featured in Weird Florida, the Popash School was something of an old friend to me. My family used to drive past it on the way to Boca Grande down south all the time when I was a child, and it was always fascinating. I watched it deteriorate throughout the years but never thought to take a picture until about four years ago when I made the trip back to Boca Grande with a friend during summer. I'm very glad I did because it's gone now, it was torn down in January of this year. I'm sorry I couldn't have taken more shots of it, or taken any inside shots but the whole place was fenced off and it was along a very busy highway. I had another shot - a closeup of the doorway - but I can't seem to find it on my hard drive.

As for the school itself it was part of a now deserted town called Popash here in Florida in the late 19th and early 20th centuries, it sort of faded away after a railway was built but bypassed it in favor of Zolfo Springs. There's not much left of the town, save for an abandoned church, its graveyard and some houses. That's sort of the brief rundown of it, I'm sure you can find better info on it elsewhere.

I'd love to go back and get photos but I live in Orlando and I haven't been down that way for oh, about 4 years. But if any of you others here are in Florida, I'd really recommend going and checking out what's left of Popash.