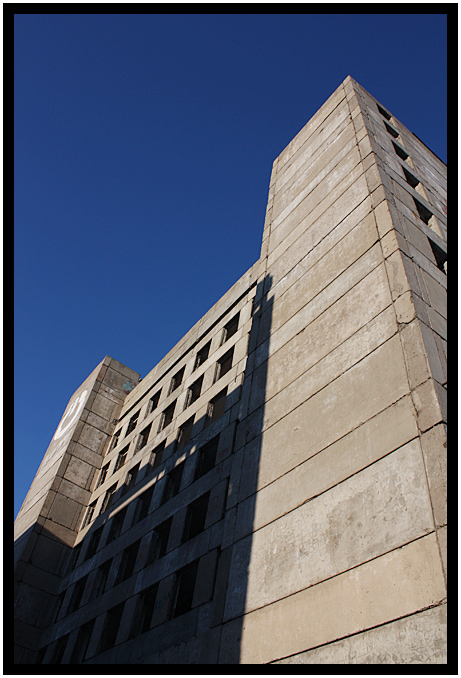 The Lyric and Alabama Theatres both followed a traditional mold in terms of set-up. Both complexes have extensive underground structures that are/were used for lounges, meeting halls and restrooms. Here is where the two sites diverge a bit. While the Alabama’s public areas below ground were and continued to follow these functions; the Lyric’s took another path after the theatre closed. The lower floor of the Lyric became a rescue mission for the alcoholics, addicts and prostitutes that once roamed the downtown of Birmingham.

The Lyric - The stairwell to the basement

"Fort Ord was a U.S. Army post on Monterey Bay in California. It was established in 1917 as a maneuver area and field artillery target range and was closed in September 1994. Fort Ord was one of the most attractive locations of any U.S. Army post, because of its proximity to the beach and California weather. The 7th Infantry Division (Light) was its main resident for many years. When Fort Ord was converted to civilian use, space was set aside for the first nature reserve in the United States created for conservation of an insect, the endangered species Smith's blue butterfly. While much of the old military buildings and infrastructure remain abandoned, many structures have been torn down for anticipated development. California State University Monterey Bay and Fort Ord Dunes State Park, along with some subdivisions, a strip mall, military facilities and a nature preserve occupy the area today."

bikenutt and I went on a couple of photo excursions out at Fort Ord, and the collection of photos after the cut are a collaboration of his and mine from both trips.  It seems each time we wind up at Fort Ord, we end up being approached by the local or military police patrolling the area.  The first time it was the military police telling us that we'd apparently driven past a barricade and into a restricted area.  We thought it was awfully odd of the Government to let us drive so close to the acres and acres of unexploded ordnance, but it was apparently only because they were not very adept at setting up roadblocks.  The second time out, we were stopped by a local officer who drove by and saw Bikenutt standing on a table with his tripod in the middle of a motorpool-garage-turned-warehouse.  She advised us that taking photos of the exterior of the buildings is fine, but the buildings are hazardous and therefore, we're not allowed to go inside to take photographs.  It's hard to say if she was referring to the stability of the buildings, or the chemical contamination that put Fort Ord on the list of Superfund sites, but we figured we'd heed her warning.  Mostly.