This is the old Torrance Hospital (insane asylum) in Pennsylvania. It is privatly owned but twice a year, we get to have a WWII re-enactment there--which scared the life out of the teenagers that were gonna party there; Germans with guns every where!!
The first floor and basement are accessible (although we all joke about asbestos) but the second floor and roof are caving in.
I also have gotten poison ivy every time I've been here, but apparently they cut down all the plants and trees around it now...
I found a little toy turtle there (not pictured) and he rode in my car ever since, until it got totalled and the turtle was lost. :( But I found one exactly like it covered in dirt at a salvage store a couple months later! :)
There is more to this post below, but there's a mysterious giant block of white space I can't get rid of on my end; I don't know if it's on your end or not...

Because I'm lazy, pictures are here on my DeviantArt album:
http://blackmariah27.deviantart.com/gallery/#Abandoned-Insane-Asylum

Briefly mentioned this on

When you're going up California 1 towards Santa Cruz, if you look to your left around Watsonville you'll see this monstrosity popping out of the flat landscape.

I don't have any photos myself, so I have to steal someone's flickr uploads. If any of you all are around those parts sometime, mos def take some shots. I wonder what it's like inside (if you can get in). I think they may be looking to renovate the place. Oh and it's a hell of a lot creepier in person too. :D 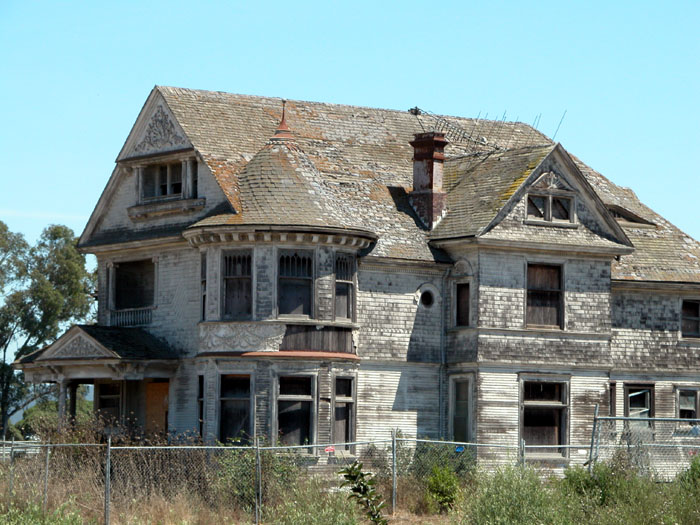 The powers that be went and did it... years, decades of neglect made the building unsalvageable and dangerous. I took this pic last Saturday with my cell.

I drove by this place in Morrisburg, Ontario last summer. It had clearly been closed for a long time, but someone was still mowing the grass that had overgrown the parking lot and walkways.