I'm planning a road trip through Arizona, New Mexico, Utah, Colorado, Nevada and California for spring break and I was wondering if anyone knew of any good spots that we should check out. ie: abandoned locations/ghost towns or just good photo spots/things to see.
I was hopping i might get some good input here.

The following pictures were taken yesterday at RAF Nocton Hospital in Lincoln, UK. We spent about 4 hours here & didn't get to see everything, there are a ridiculous amount of buildings on the grounds.
You can find a little bit of info here: http://www.raf-lincolnshire.info/noctonhall/noctonhall.htm
Unfortunately we couldn't gain access to the amazing looking Hall, but we had been warned against trying anyway as it is very dangerous after 2 fires.

I took hundreds of pictures, but here's a few for your enjoyment!

All winter long, this beauty called out to me like a siren's song. I waited for the apocalyptic snow accumulations to melt and the record-breaking temperatures to rise. Finally this week I had my chance as spring broke in Virginia. I made two visits: one to take photos of the outside, and another to come back and go in. While walking around the perimeter, I felt the house thrumming with positive energy. I peeked in the kitchen window and was greeted with what felt like a burst of excitement from the house itself. It was as if it was begging me to please come in. I wasn't sure what I would find, but I've never felt such a happy vibe from any abandoned place I've ever visited, which is why I've called it the House of Joy. A bulldozer had been parked behind it all winter, so I wasted no time in getting back. 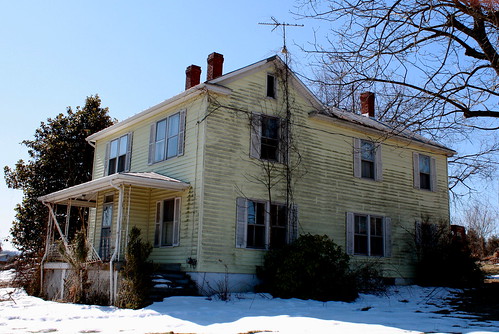 Highway View School was an elementary school which was part of a school district in Wisconsin. I cannot find much information on it, but it has been abandoned ever since my family moved into the area (23 years ago). I was carpooling with a family friend over this past weekend and I mentioned it to her as we passed it. She said ever since she knew of the place, people questioned it to some extent. It closed sometime in the late 1970's, but reopened in the early 1980's. Her two sons attended the school in the mid 1980's, but since it was closed by September 1987 when my family moved in, its last school year was probably that of fall 1986-spring 1987.

I wish I could find some more info on the place, but there doesn't seem to be any that I can get my hands on. I'm glad I got the information I did, and I hope you enjoy the photos. The building's parking lot has now been turned into a commuter park-n-ride lot, so that's why you may see cars in the photos. All photos were taken from the outside of the building (no access point that I could find, though I'll probably go back and do more exploring), with a point-and-shoot. It was foggy- and I'm always nervous about taking photos of the building since there's a house directly across the street- so with the almost zero-visibility fog, it was definitely the right opportunity.

( Collapse )
This is a house in a nearby town. I couldn't get in, but I wish I could!