"Old Amber" is a name I gave to an old yellow house in the forest.
It has been long abandoned, and will forever remain so.
I first stumbled across it while driving my Jeep down some washed out dirt roads.
It was just barely visible over the summer foliage...

Throughout the past few years I have used it as a setting for several of my portrait shoots.
*I have included various portraits from this location at the end of this post*
Due to my "frequent" visits there, I have developed a kind of bond with the place.
Everyplace has a story, this is Old Amber's...


It All Starts With A Flood...

In 1955, courtesy of two hurricanes,
the Delaware river in the Poconos received over 20 inches of rain.
This rain fell within a frightfully short two-week span,
resulting in a tremendous rise in water levels...
The flood-waters destroyed property, and even took lives.

The flooding sparked a proposal to congress in 1965:
To protect against future flooding, generate electrical power,
supply water to the community, and serve as a recreational area...
the "Tocks Island Dam" was to be built on the Delaware river.

The dam was to cause a large body of water to balloon
between the Pennsylvania and New Jersey Borders.
A total of 72,000 acres was acquired for this future lake.
Some of this land was already lived upon...
New Jersey and Pennsylvania seized the properties already resided upon under "eminent domain"

On the New Jersey side, much of Pahaquarry Township was appropriated.
So much in fact, that it was left with only about a dozen residents.
(In 1997 the town of Pahaquarry was incorporated into Hardwick Township)

Opposition to the Tocks Island Dam began to grow,
as the public began to feel the dam un-necessary financially wasteful.
Thus, the dam project continued to be postponed indefinitely.
Land seizure continued in some areas however, and snagged up in the mess was "Old Amber".

In 2002, after much consideration and research, the Tocks Island Dam was officially de-authorized.
In fact, a riverbed study done several years ago revealed that if the dam was built,
it would have collapsed within a very short period of time.
The soil of the riverbed was not as structurally sound as first thought.
The land seized exists today as the "Delaware Water Gap National Recreation Area"

Abandoned homes still stand, scattered throughout the park.
Reminders of what was, and what could have been...

Gore Hill cemetery itself may not be technically abandoned, but a huge majority of the graves, and even some of the inner pathways, certainly have been, leaving the weeds and spiders to take over.

Established in 1868, it's one of the oldest cemeteries in the Sydney metro area, and some notable people are buried there (a few of them appearing to be the only graves that are still maintained). It stopped taking any new burials in 1974.

The whole set of pics can be seen at my flickr page. 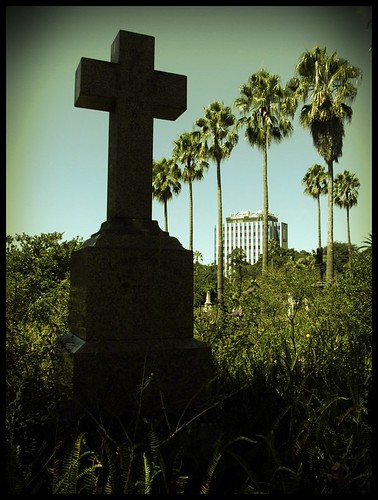 Here you can see all the overgrown grasses and weeds, and the strange row of very tall palm trees that were planted down the middle of the cemetery. The whole place is surrounded by bushes and trees, and then right outside of it is a bustling urban area including a hospital and various high-rise buildings. It's oddly silent inside the borders, though, and despite being right next to a city park, I didn't encounter any other people or indeed many signs that people come inside the cemetery walls at all anymore.

I feel like a bit of a poser in this community - I only post links!  But check this out!
I could barely look at it because of all the dead snakes - so creepy!

Why pray tell is this a Christmas post?
Because dear friends I took these pics last October in Ohio while dad and I were slightly misplaced, out of gas and trying to get pack to Dublin so we could deliver my brothers recently acquired wedding gift/hedgehog (Yes I got my brother a hedgehog as a wedding gift. His name is Archimedes). Anyway while dad was doing gas related things I noticed Woodys BBQ totally abandoned and covered in Christmas decor on the side of the 'Highway'.

Also at the end of all this there's a bonus for Mr.

jj_maccrimmon who has my thanks many times over.