Some friends and I decided to check out Sydney's Malabar Battery a couple weekends ago.

Description from Wikipedia: "Malabar Battery was a coastal defence battery built in 1943 during World War II ... Two 6 inch Mark XII guns in gun emplacements on mountings were constructed at the battery. An underground counter bombardment facility, with gun crew ready rooms, ammunition supply and engine room together with a narrow-gauge tramway which was cut into the sandstone and lined with sandstone and a large battery observation post were also constructed at the battery.

The tramway was a single track of 560mm (22in) and was to transport the 6" projectile munitions to the shell expense stores/magazines in the base of each gun emplacement. The tramway traverses through a deep continuous cutting lined with sandstone leads from the ammunition drop off point to the basement of the ammunition supply room and up to the two gun emplacements. Before reaching the gun emplacements the line enters a rectangular section concrete tunnel which is 94m (310ft) long.

Also constructed as part of the battery were northern and southern searchlight blockhouses with associated engine rooms and the battery barracks and toilet blocks.

Following decommissioning of the gun emplacements after the war, the site fell into disrepair." 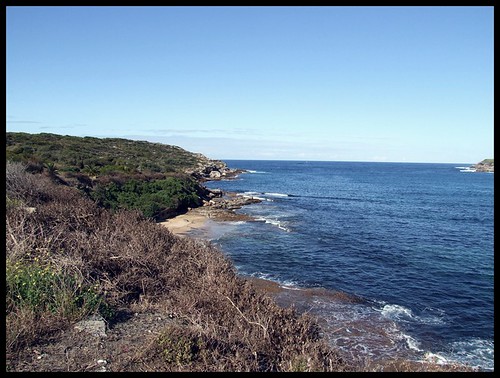 This was taken from the beginning of our trek. We missed an actual trail that would have led us much more easily to our destination, which we used on the way back (and was actually incredibly muddy, so really both ways had their pros & cons). We walked from this point all the way to the furthest point you can see in the far distance, where the battery is located.