A friend of mine went to a town in Quebec, Canada called Saint-Roch-de-l'Achigan and took pictures of this abandoned building, I thought I'd share them!

Oh and I found out this other link he posted. The building is in Saint-Henri "district" of Montreal. He says it's going to be demolished soon but here are the pictures.

both link should bring you to two different entries even if they look the same.

I took these on a rare, permissioned trip to Atlanta's City Hall East building in 2008. I realize I never did post them to the community, so here they are for 2 reasons: 1) This place is officially "abandoned" now, as the city vacated the building as of March; 2) all this week the city begins a huge "yard sale" to rid itself of the contents of the building. Yes, for 1 week only the city is allowing the public to purchase everything including office furniture, 911 dispatch desks, vendor carts from the Olympic games, and random odd & ends that were bought for the city's offices over the past 30 years. I plan to check it out, mainly just so I can set foot in the building one more time before the proposed developers gut the place and turn it into condos. The event begins Monday and runs through Saturday, 9am-4pm each day, doors open on Ponce. If anyone in the Atlanta area wants to meet up, I hope to be there just before 9 tomorrow. 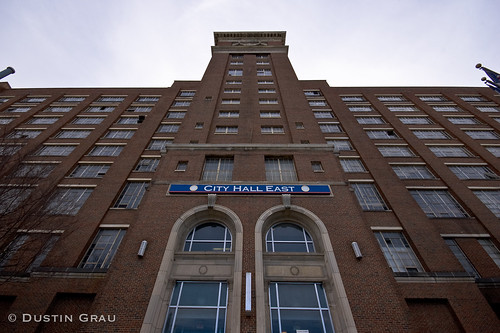