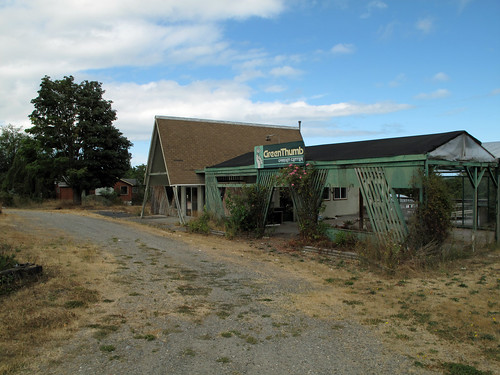 Dig that's 70's architecture and typeface - groovy baby! (I can say that without irony as I actually had the 'privilege' of living through the 70's.)

Grabbed these shots a couple of weekends ago while exploring on the Olympic Peninsula. This is the first time I've tried to document a place like this, and while I didn't do the best job here, I learned a heck of a lot about how to do it.

The light isn't the greatest as the day was fairly cloudy.

As near as I can tell, this place was abandoned sometime after 2003. (That's the latest date that Google Earth shows the greenhouses intact and the property appearing green and maintained.) The general condition of the building seems to also support that. It's very odd that they went out of business just as the rest of the area was starting a massive growth spurt - many other, equally isolated, businesses seem to be thriving. Not far away is a well regarded French restaurant that seems to have been there since the glaciers receded.

wiley_nilly's comment - they said they'd post a link to a set they took of the same location.

Perched upon a man-made peninsula jutting out into the waters of Lake Erie sits a derelict grain elevator.
Christina and I were drawn to this place, not by it's former industrial purpose, but by it's immense size.
As we slowly approached this towering being, it's true dimensions became ever more obvious.
Though this was clearly a massive structure when we first spotted it from the freeway, to gaze upward from it's base is literally dizzying.
It's form blotted out the noon sun, and cast a lengthy shadow over the side of the peninsula into the dark waters at it's edge.

The peninsula, like the massive structure which it was constructed to support, is beginning to show signs of it's age.
This great lake, like all bodies of water, emits a determined and unwavering force upon anything artificial within it's realm.
Large cracks have now become small chasms and pitfalls throughout the concrete lining the left shore.

The interior, like the facility itself, is unspectacular in purpose. However, like it's exterior, this is made up for by the beauty of it's form.
Massive, almost innumerable support columns stretch out into the darkness that dwells at the rear of the edifice.
Everything is covered in an earthy-colored dusting, creating an almost monotone landscape.
Edges here were not defined by their hue, but by the shadows which they cast. Yonkers Power Station is sinking, and I don't wanna swim.

So back in July I took a week off and went to Jersey, and spent a couple days exploring in both NY and NJ. First stop, Yonkers Power station. 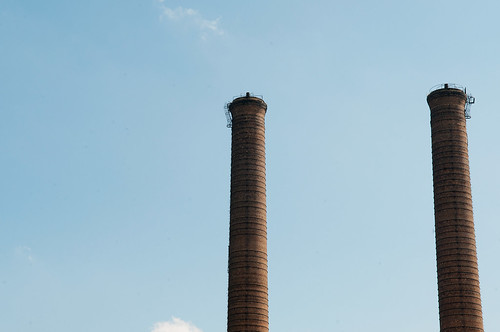 I spotted this place in Mansfield, MA across from the Mansfield Crossing shopping center. It looks like it was probably pretty neat in its day. Looks like they are going to be expanding the shopping center across the street. There was another boarded up old house right next to this one.

I didn't have time to snap any other photos. I'd love to explore it, but it's in a very busy area so it would be impossible.