The OMH don't like it.
Rock the Casbah
Rockin' the Casbah 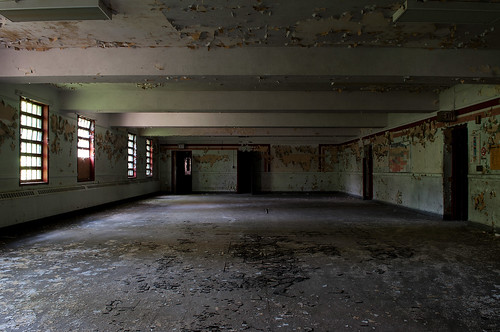 As you enter through the aged wrought iron fencing of this Victorian era cemetery,
you are immediately greeted by the beautiful ivy-covered stonework face of it's now retired chapel.
Constructed in 1862, it long served the grounds as both a house of prayer, and as a site for funeral services.
The grounds themselves, which date back to the 1830's, are still active and properly maintained.
A strange contrast is found as the neatly cut grass borders the dark and shuttered walls of the church.
Almost as if the building itself were a giant mausoleum, entombing a moment forever trapped in time.
No wind blows through these pews, no voice is heard from these choir benches.
The only patrons that pay visit today are the pigeons who manage to enter through the missing portions of stained glass... and us.

As is frequently found in places which have been left abandoned, a fine gray dust has come to settle upon most surfaces of the hall.
This not only takes away what little color was once there, it also casts a somber mood within the walls.
Even when sunlight pours in through the upper glass windows of the chapel, the hall never glows.
This church is dead inside, and it looks the part.

Though no person has laid hand upon the internals of this chamber, time slips in through the tiniest cracks...
You can never really see its forces at work, but evidence of its constant presence is everywhere.
The great doors that once welcomed you, now sit crooked and peeling upon their corroding hinges.
A large portion of decorated wood that once supported the pipes of the pipe organ had given up it's footing over the years.
It can now be found broken and covered in pigeon filth, lying where it crashed upon the marble floor next to the organ itself.
Spiders have crafted nests for themselves in places that one would never expect to see them.
As a place that was very often filled with the sorrow of family and friends for a passed loved one,
it is as if the chapel itself has come to manifest what it has witnessed for so many centuries.

The inner walls of the prison.