The plant is not abandoned, but some buildings it does not work
. There is, and lay on our way. The most interesting is that the entrance to our building is located right next to the working gearshift, but we are making a serious face and hurried fall, wherever go ... 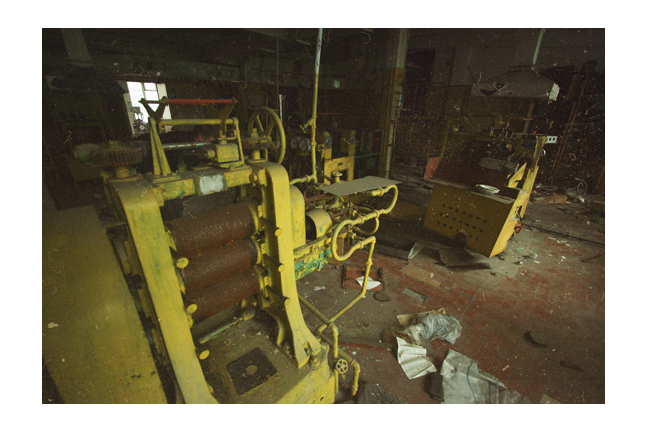 Just before the dawn of the 19th century, a deafening roar is heard from the wooded mountainside overlooking a then-infant settlement town.
Upon investigating the forest for the source of this disturbance, the people of the town came to find
that what they had heard was the birth of a new spring bursting through the surface of the earth.
For the following centuries, this new spring remained little more than a curiosity to the town far below in the valley.

That is until 1851, when young businessman came to hear of the mountainside spring,
and decided that it would be the perfect place to create a “water cure facility”.
Hydrotherapy was a popular practice during the mid-19th-century, and the newly erected water cure facility opened it's doors for business in 1854.
Unfortunately this endeavor proved short-lived and the original owner was forced to sell off within only a couple years.
In fact several owners tried and failed with the business, until it finally fell into competent hands on October 1858.

This new owner had a vested interest in hydrotherapy and the medicinal properties of natural springs.
His interest and knowledge in the field was brought on by long term illness earlier in his life.
Having been literally at death's doorstep, he made a miraculous recovery after experimenting with hydrotherapy at a water cure facility.
This life-changing event made him a life-long advocate of hydrotherapy, and drove him to obtain a medical degree.
It seemed that if this facility was indeed going to survive, he would be the one to save it.

Restaffing with better-trained hydropathists, he also incorporated the teaching that a proper diet is key to a healthy life.
No red meat, sugar, coffee, tea, alcohol, or tobacco was allowed within these walls, instead focus was placed upon fruits, vegetables, and unprocessed grain.
In fact this facility is credited with the invention of the first cold breakfast cereal.

By the 1870's the now-aging owner had turned the successful business over to his daughter-in-law, who had also obtained medical degrees.
However, in June 1882, a fire broke out. The flames devoured nearly the entire main building.
It was feared that the wide-spread damage would cause the water cure facility to close down for good.
This was not the case though, and in October 1883 the facility reopened as a sanatorium.
In place of wood, this new, larger structure was constructed completely of fireproof brick.
The business thrived, and in turn was passed along to the son and heir of the sanatorium.

Medicinal science moves quickly however, and by 1941 hydrotherapy had been all but debunked,
forcing the sanatorium to file for bankruptcy.
The building itself lived on in various forms for a while thereafter...
For a short time it even served as a post-World War I psychiatric hospital for veterans.
After that it came into several more hands, all of which attempted to re-establish it as a health resort, and all of which failed to do so.
At this point things were looking quite bleak for this once renowned sanatorium, and it seemed that it's days of use were all but behind it.
With spring comes rebirth however, and in the spring of 1929 the facility once again found itself in competent and resourceful hands.

These 61-year-old hands belonged to an ex professional wrestler, and early advocate of body building.
These hands were also responsible for the magazine Physical Culture, which was one of the cornerstones of the publishing empire at the time.
His popularity, along with his flair for health and nutritional education, revitalized the sanatorium to it's former glory.
No longer was the focus on hydrotherapy however, being as the practice of “water cure” was all but dead during these “modern times”.
Instead, the resort now emphasized a wide array of physical activities to keep patrons in shape.
Swimming, tennis, hiking, golf, and various other therapeutic treatments were offered.
The facility also became known as a haven for celebrities of the time to “get away from it all”.
Having been aging at the time of purchase, the new owner passed away not long after, at in 1955.
This was not before performing a parachute jump at the facility at the age of 81 though...

Shortly after that, the resort once again changed hands. However at this point history felt the need to repeat itself, and the facility began to decline in popularity.
The resort dragged on through a slow and withering death, eventually passing away in 1971.
Today only a decayed husk remains upon the wooded mountainside, it's sunken and unblinking eyes still watching the town and valley far below.

last night on an new episode of "inspector Lewis" the investigation led to an abandoned hopital and they used an actual abandoned hospital. it was kinda cool seeing a high def walk thru of the building. i they even used the paper strewn file room to the stories benefit.
Collapse