Perched atop a steep embankment overlooking a river, and concealed by dense forest sits a moss-covered castle.
A whimsical gatehouse bids you welcome to its courtyard, now more closely resembling a wild growing field than any majestic terrace.
As you stands amongst the tall grass, admiring the arched windows and peaked roofs of the neo-Gothic architecture, black birds fly overhead, swooping in to their nests thorough second-floor windows.
To say this place may have materialized from the pages of a fairytale storybook would be no exaggeration, and may be just as realistic a thought as the actual events behind its creation...

I have attempted to research this castle online, through multiple sources, to no real gain.
It seems that the place's origins, and history prior to the late 1940's, is enigmatic at best. With multiple websites displaying conflicting information, we thought it best to contact the local historic society
and library, the later of which is the only one to have graced us with a reply. Unfortunately, after my follow-up email I could not attain any further response from them either.
An air of mystery clings about this place almost as tightly as the ivy upon its stone walls.
What follows is a historical account assembled to the best of my ability, and verified wherever possible through multiple sources.

To begin; it seems unanimously agreed upon, though the exact date varies, that the castle was constructed prior to the year 1920.
From what little information I was able to get from the local historian, the architect of the castle may have been Bradford Lee Gilbert,
a notable architect of the time. Having passed away in 1911, this places the castle (at least in design stages) within the range of dates agreed upon by the various sources.
This grand castle was to be built upon some 1,000 acres of forestland, far from any neighboring structures. Some sources claim that the design plans called for roofing slate imported overseas from England,
and marble floor tiles from Italy. Wherever the bits and pieces came from, I can state with utter certainty that they culminated in the creation of an astounding home, sadly the owner was never to see it for himself.
Before the completion of the castle he passed away, leaving behind his wife and son (some sources claim a daughter, all agree it was an only child) along with the unfinished castle.
Now, here is where the story truly begins to derail...

It is seemingly agreed upon that the following year found the wife slowly sinking into a kind of dementia, and that she was subsequently sent off to a sanatorium. How her time between the death of her husband
and her commitment to the sanatorium was spent is not clear though. Some of the more bizarre accounts tell of her being held as a kind of captive within the castle itself.
Sealed away in a portion of the home, behind doors which had no interior knobs. These same stories tell of doors and door-frames etched deep with grooves from her helpless scratching
in some vain attempt at escape. Being as this is a true-life castle on a hilltop, somehow the story of a maiden held against her will seems less far-fetched here than anywhere else.

Whatever the case, after her eventual commitment it appears that the son (or daughter) set off on their own, married, and moved away with their wife (or husband).
This likely transpired around the year 1930 or so, and has left the castle without a tenant ever since. Supposedly a groundskeeper once resided in a sectioned-off portion of the castle,
and watched over it for some time thereafter, but he has long since left as well. In 1947 the castle was purchased by an order of Freemasons, to what ends I am not sure,
though judging by its current state it seems that they don't intend to fix or maintain it.

That's it. As far as I can tell there is no history to be found after the Freemasons acquired the castle and property in the 1940's.
It find it hard to believe that such a surreal and beautiful place has no definitive documented history. Surely the fact that a castle was being built in the town would have caused someone
to take notice enough to document it, and surely it did, but the whereabouts of that information is has yet to be revealed to me.
(If additional information does come to light, I will update this entry on my site accordingly: Antiquity Echoes)

The strangely sparse and twisted back-story casts this castle in an unexpected light. I did not foresee, whilst there filming, that my research would be so turbulent and inconclusive.
In a way it makes the castle into something else entirely. Only it knows what truly transpired within its walls, throughout the nearly one-hundred years it has been residing upon its hilltop,
and it seems to enjoy keeping secrets.

Can anyone identify what type of building this is? I drive by this almost every day and I'm assuming its a coal breaker or some type of factory building. But I'm not sure.  I know nothing about architecture :) 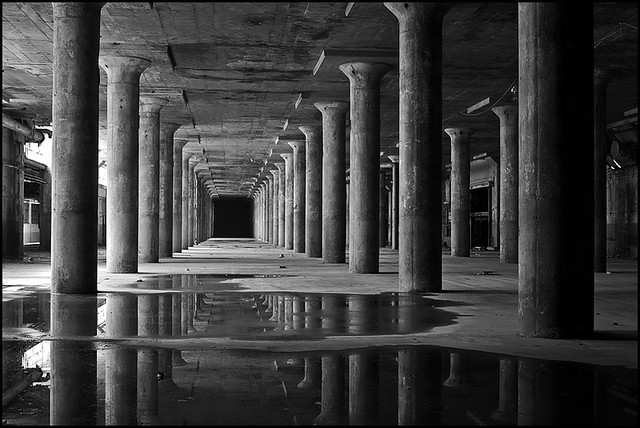 Not sure if this has been posted in the past, but this was posted on Twitter and I had to share.