The late 1930's found a monolith slowly stretching skyward from the center of a psychiatric center's campus. Construction was ongoing for some time, as floor upon floor of red brick
and barred windows were stacked atop one another. What stood after work completed in 1939 was a towering facility of 13 stories, for use as an infirmary for the hospital center's elderly
and those with chronic physical illnesses. Like most mental health centers of this era, it operated as a separate entity from the town and county in which it existed.
A city unto itself - separated from the greater world physically, and even more-so by the shameful mentality of the times.

Population peaked here in 1954. With the number of patients exceeding 9,000 the facility was not just overcrowded, but severely under-funded.
As is always the case; it was the patients who suffered for the poor decisions of everyone else. These same people who depended upon others for their very lives, now found themselves
without so much as a bed to sleep on. Eventually the creeping wave of national de-institutionalization washed across this facility, as it did most other large psychiatric centers in the 1970's.
From that point on the hospital slowly began to downsize its populous. Patients deemed suitable were released, some of the more elderly were relocated to nursing homes,
and still others made their way over to the nearby Pilgrim State Hospital. This tower with its countless rooms and halls now sits vacant, as it has since it was shuttered in 1996.

Its size made it famous when it was first constructed, and even today it impresses as it towers above the rest of the landscape. Its massive form, combined with the dead silence from within its walls
creates an aura unique to this place alone. Approaching it on foot the mind is simply amazed that something so very big can also be so very empty. It seems terribly unnatural to behold,
and therefore uncomfortable to dwell upon.

The first thing that greeted us upon entering this void of a ward was a fantastic mural unlike anything I have ever seen in any building, let alone an abandoned hospital.
It depicted in wonderful (and skewed) detail the hospital patients as they spent their time in the recreation room. The same room which is now covered in this beautiful mural.
Some speculate that the artist behind this work was a once well-known cartoonist by the name of Percy Crosby. A man most famous for his cartoon strip “Skippy” which ran in Life magazine from
the 1920's until 1945. Unlike most rumors however, this story has some footing in facts. A few years after the Skippy strip ended Percy Crosby lost a lengthy battle with depression and attempted
to take his own life. Failing in the deed he was committed to this very hospital, the place where he was to spend the remainder of his life. He died on his birthday; December 8th 1964.
During his years as a patient he continued to produce artwork, often depicting his fellow residents. Even in his quick sketches the subjects seem to all share the same lifeless gaze.
In the end it is not of great importance who painted these walls, but simply that they were painted. It grants a very intimate look into the daily lives of the patients who once stood
in the very spot we currently are some thirty years later. The past and present co-exist in this room thanks to the intense efforts of a nameless artist.

As we climb skyward through this enormous building the emptiness becomes more and more apparent. Every noise travels exponentially further than expected, and reverberates back off dusty floors
with an eerie murmur. Each passing floor and landing is identical to the previous in nearly every way, making the stairwell seem like an endless spiral into nothing. It is not until you get to the roof
that you realize just how high you have traveled. It was from here that one could have viewed the entirety of the campus when it was operational, as it sprawled across hundreds of acres.
Now there is little left save for a few buildings amongst many trees and fields... and we as a society are all the better for it. 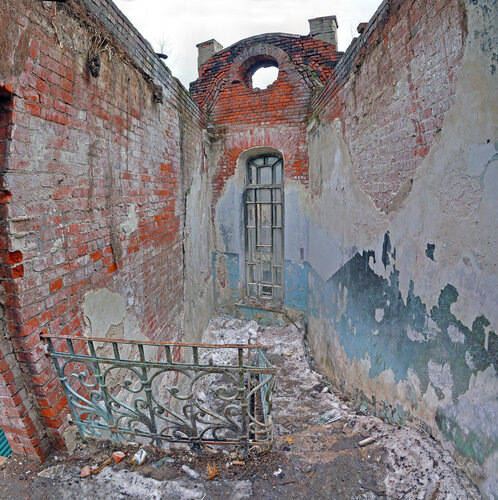 Until the collapse of the Soviet Union in 1991 Balaklava was one of the most secret towns in Russia. 10km south eas of Sevastopol on the Black Sea Coast, this small town was the home to a Nuclear Submarine Base.
Almost the entire population of Balaklava could not visit the town of Balaklava without good reason and identification. The base remained operational after the collapse of the Soviet Union in 1991 until 1993 when the decommissioning process started and the warheads and low yield torpedos were removed. Then in 1996 the last Russian Submarine left the Base, and now you can go on Guided tours round the Cannel System, Base and small Museum, which is now housed in the old weapons stowage hangers deep inside the hillside.

Off the shore of Staten Island New York rests a veritable graveyard of decommissioned, scrapped, and abandoned ships of various sizes, ages, and states of decay. Things are constantly changing here; new boats are brought in and old ones are chopped up or sunk into the muddy banks of the harbor.

The beauty here is in the untouched rust and rotting wood, where weather and salt water accelerates the rate of decay, transforming these ships of the past into sculptures of steel rising from their watery grave.

The abandoned Lopatino Phosphate Mines. Located close to the Voskresensk city (70 km from Moscow), the area is still famous for its fossil beds (and even dinosaur skeletons) from the Jurassic period
This is what they called heavy machinery in Soviet Russia. This giant excavation device was used for exploitation of phosphorus-field somewhere near Moscow and abandoned after the collapse of the USSR. Previously this was an object from the chain of military air defence stations. Then when USSR went down many objects went down too. Lack of funding, new military doctrines and concepts, then international disarmament initiatives – all this lead to thousand of those being left to stay in condition like this.

There are a lot of abandoned military objects on the territory of Russia and other Former Soviet Union countries, but most of them are looted by local people. And here are the sceneries of the former airbase that remained almost intact.