It is no coincidence that in no known language of the galaxy does there exist the expression ‘as beautiful as an airport’. - Douglas Adams

Now defunct Tempelhof airport in Berlin, Germany. The airfield is open for the public as a recreation/green space.

Hi everyone... I am excited to finally have something to share with you all :) I went to visit Henryton Tuberculosis Sanatorium, or Henryton State Hospital, in Carroll County, MD yesterday.

A brief background (more details can be found at the linked Wiki) - Henryton was built in 1922 to be a tuberculosis treatment center for African Americans, one of the first to provide the same level of care as white patients. Sometime in the 1960s, the tuberculosis center merged with the Department of Health and at that time, the hospital ceased operations with tuberculosis treatment, and began operations as a facility for the severely mentally challenged. Most people believe it was an asylum for the criminally insane, but that is false. Local urban legend says that it is haunted, but the haunting stories are not consistent. Many people have emerged with stories of seeing/hearing ghosts, shadows, voices, etc. It's also a popular place for junkies/vandals/general hooligans to go.

It was in operation until 1985, when its doors were closed for good. It has seen its fair share of vandalism (and then some) and it is actually quite dangerous, due mostly in part to massive quantities of asbestos and general decay of the building (as you will see in one photo, the floor has collapsed in one room). I chose not to go upstairs or stay inside for very long for these very reasons.

Not going to lie, though - it was definitely eerie. I am a skeptic when it comes to ghosts - I don't believe in them now but I am very open to the idea (and I'd love to, but I need one to prove it to me ;)) but I was sufficiently, utterly creeped out to be there. There were so, so many noises that had me jumpy (hey, I said I'm a skeptic, not a non-believer :))... but I wrote most of them off. General creakiness? 90 year old, abandoned building on a windy day - check. Rustling? Abandoned building with all the windows busted out surrounded by woods on a windy day... check. Doors opening and closing? Again, all the windows were busted out, it was a very windy day - I discovered some of the doors just swinging and banging. Honestly, part of my being really jumpy was "oh god, there's someone else here... there's some kind of homeless crackhead sleeping upstairs and he's gonna get me!" but.. no one in sight the whole time.

I had a lot of fun exploring, though, and I hope you enjoy :) 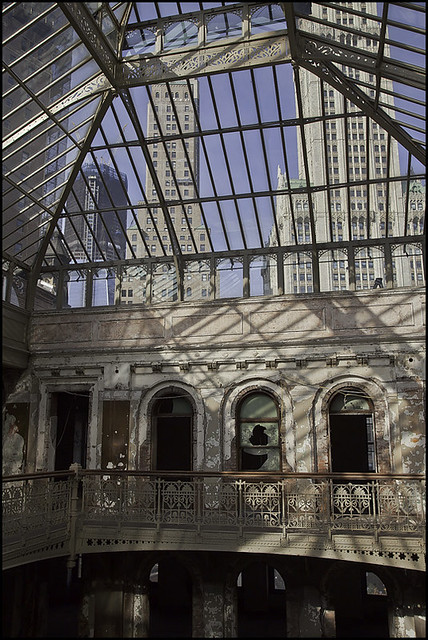