It's been a while eh? Hope nobody here forgot about me...
For those with good memories though, some may recall that I did a post ages back on a place called Gingerbread Castle.
Well, Christina and I were recently able to get back there and do a proper job photographing the place
Neither Christina nor myself were every truly happy with our work from there, so we were more than eager to re film it when the chance presented itself.
With that being said - onto the entry.

Everyone remembers their childhood, but for most people it is remembered in an objective way. We recall the critical events, the familiar faces and places, certainly,
but for all but a few of us, we completely lose touch with way it feels to be a child - to inhabit a world unbounded by physical limits, mortality or fear.
Children inhabit the same physical world as the rest of us, but they see it in magical and disproportional terms that few adults can understand. F.H. Bennett was such an adult.

In the late 1920's, while attending a stage show of "Hansel & Gretel", he had an idea. He envisioned a place that would bring families together using the whimsical spirit
of fairy tales. He approached Joseph Urban, a world-renowned set and prop designer, to help bring his dream to life, and a few years later, Gingerbread Castle was completed.

When it opened in the 1930's, Gingerbread Castle was a children's park designed around stories collected by the Brothers Grimm. Children dressed as Hansel and Gretel
would take families on tours through the grounds. Along the way, visitors were greeted by statues of various fantastic characters, often depicted in scenes from the stories
of which they were part. The castle itself was the highlight of the tour. Guests were brought in through the 'dungeon' and up a spiraling staircase to the main hall. The walls
appeared to be made of peppermint sticks and other treats mortared together with icing. High above jack climbed a beanstalk and a giant peered in at the room and its occupants.

Gazing out from any of the castles many arched windows one simply cannot overlook the looming facade of a long-abandoned and rather unnatural looking industrial building.
A structure which (in one form or another) predates the castle on the grounds by well over a century. Given its mass, it stands claustrophobically close to the castle walls.
The tall bleak form towering in almost comical contrast to whimsical castle which it dwarfs. Throughout its lifespan this strange looking building was put to numerous uses,
and though none may be so interesting as the castle next-door they are still worthy of mention nonetheless.

What is now an Escheresque collection of towers and stairways was birthed into this world in 1768 as an ironworks on the bank of a rural river in Northern NJ.
By 1774 the ironworks had become abandoned due to competing forges in the immediate area. Years later, in 1808 the disused building was re-purposed as a grist mill,
taking full advantage of the Wallkill River which runs through the property. Things didn't really pick though until Fred Henry Bennett came into the picture in the early
20th century, purchasing the mill and surrounding property after the success of his company (F.H. Bennett Biscuit Company) and their creation of the Milk Bone dog treats.
Soon thereafter the mill expanded and began the refining grain for use in the company's Wheatsworth biscuits, a whole-grain cracker snack-food billed as being more healthy
than the standard white flour crackers of the day. The crackers proved quite successful, so much so that the monicker “Wheatsworth Mill” was soon given to the facility.

Time progressed and as stated above; Bennett created the Gingerbread Castle and associated park within the center of the property on which the mill stood.
In 1931 the F.H. Bennett Biscuit Company was purchased by the National Biscuit Company, which was later abbreviated to its present name - Nabisco.
The Gingerbread castle was not part of the sale however, and remained an operational theme park open to the public. Right next-door Nabisco continued to use the plant
as a grain refining facility until it was sold off to the Plastoids Corporation in 1943. The Plastoids Corporation further modified the already strange building to suite the companies
production of wire and high-frequency transmission cables. The closing of the company in 1989 marked the end of use for the old building. "Plastoids" still remains printed across
the uppermost portion of the tallest tower, in letters so desaturated from weather and sun that they are almost illegible.

Long ago this plant produced goods ranging from iron, to biscuits, to industrial cables. Now the only things it creates are the giant shadows which block out the sun hours before it would
naturally set beyond the horizon. Dead in the heart of this early night can be found the Gingerbread castle. Its bright and colorful paint faded and its multitude of frolicking fairytale characters
all but vanished. A high chain-link fence, crowned in barbed wire, acts as a last defense against thieves and vandals who found the castle walls to be anything but impregnable.

This dilapidated monument to whimsy, surrounded by a sharply realistic metal wall, is not unlike the fantasies of our childhood that it indulged.
Like the castle, proving too delicate to survive in the real world, our dreams and imagination are locked safely behind steel fences and then
simply left in some dark corner to rot, their purpose forgotten.

Today we will visit the plant Kolomnahlebprom, but rather on his part abandoned. In the presence of silos in the area, I can assume that there once was stored flour. We are interested in building an older building, located in the same place, which, as it turned out later was engaged in cleaning the grain. We climbed over the fence and concrete breaking snow dunes, we get into the housing ... 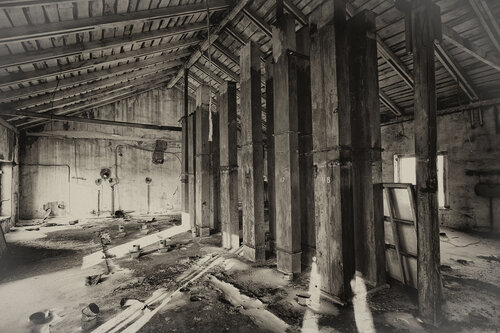