today I went to the Fort Ballance barracks, I posted pictures of them here last year but they were feeble so I went and took more. First time posting... actually, this is my first time going into an abandoned building! These photos were taken a year ago. I didn't get around to uploading them until now. Sorry they're not the greatest; as you can see, the day was overcast and washed-out, which my camera doesn't deal well with. Also, I was really pressed for time, so I was more concerned with covering as much ground as I could than with setting up shots.

Last spring, I went on vacation in Okinawa (amazing, btw), so of course I couldn't pass up the opportunity to see one of Japan's most famous abandonments, the "Royal Hotel" (actual name appears to be Kogen Hotel) in Nakagusuku. All I can find out about the history of this place is rumors, but they all agree that a wealthy businessman decided that he wanted to build a huge luxury hotel/resort. The locals said, "Dude, you can't build that close to the tombs and the utaki (Ryukyuan sacred spot), you'll get cursed." Businessman built anyway, apparently deciding to skip the blueprints. Stairs go up only to go back down, walls don't match up where they should, there are rooms that you have to hoist yourself onto a ledge to enter. Sure enough, there were several strange accidents and deaths, the money dried up, and the project was abandoned. Some say the businessman went insane; others say he died mysteriously after spending the night in the hotel. Some also say that a Buddhist monk lives there, keeping angry spirits at bay. (I didn't see evidence of this, but the utaki, shrine, and tombs I saw all showed signs of maintenance.) Reportedly, locals won't go near the place because it's so haunted. 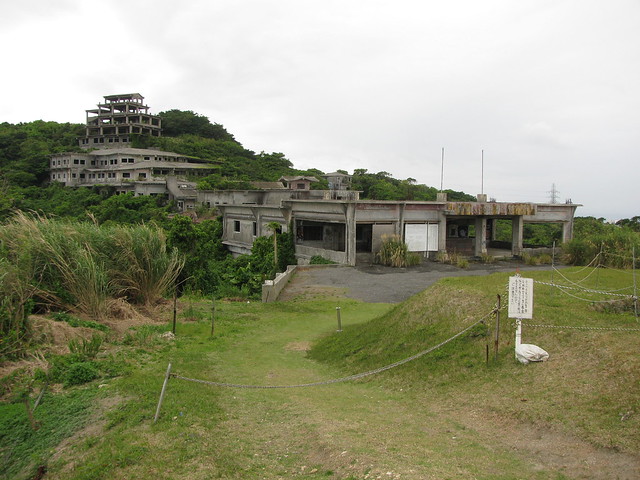