Peering out over a small town, from within a thin wood-line which was once a manicured front lawn, sits the broken and battered remains of an old hotel.
When it first opened in 1927, none could have foretold the state that this old place would eventually decay to. During its prime it operated for several decades
servicing patrons of the town's then-famous bath houses. Though once tremendously popular, these baths eventually fell to the wayside, and along with them, this hotel.
Now the tower is home to nothing, save it's slowly twisting corridors and the pitch black shadows which conceal them.

Though we visited this place in the early spring, it was as if winter's grasp had yet to vacate the hotel's interior.
As you step from the daylight into the darkness which clings to this place, you hit a wall of cold air far more suited to the dank recesses of some lightless cave
than a hotel lobby. That being said, it comes as little surprise that the walls and ceilings of this weathered place have begun to reflect just that. Much of the building's
structural wood has come to be exposed, as the ornate facades wither, die, and fall away. This wood, which supports the five stories that make this hotel,
is water-stained to a dark brown, giving the impression of being perpetually wet.

This excessive moisture has buckled and bowed the old hotel from top to bottom. Within its walls one would be very hard-pressed to find a single level surface.
The effect is dizzying at times, as opposite walls pull away from each-other your sense of balance often comes into question. The wings of this hotel are slowly
sinking, and each in a different direction. The roofing is taut from the stress of holding all these decaying parts together, and has begun to tear in places,
allowing even more water easy access to its already saturated framework. At one point while filming we clearly heard a loud gurgling sound coming from directly
overhead. Somewhere above us, beyond the blackened wood, this building was openly weeping. 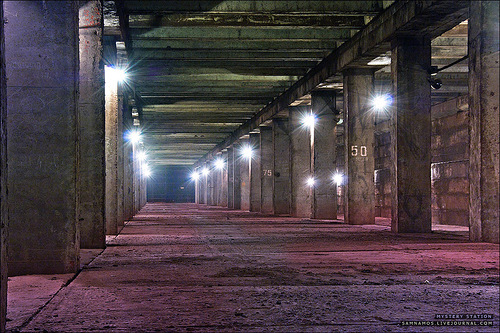 This is a report about the unfinished station - a ghost, through which several destilety go non-stop trains. GOOGLE TRANSLATE .Comments plese write on you language, without translate on russian - they become incomprehensible :)