The Volksbad (public bath) in Nuremberg, lies outside of the ancient city wall, in the middle of an otherwise busy street. Hundreds of cars pass the old buildung, built according to the then-popular style of art nouveau, it gives a huge impression even when just standing at the entrance.

In 1914, this bath first opened it's doors for the people of Nuremeberg and it's surrounding cities. Complete with 3 swimming pools for men and women, 66 bathtubs and 14 showers, a steam bath as well as several hairdressing and refreshment rooms. A built-in laundry service and even a pool for dogs could be found within this structure. Between 1942 and 1945 it was hit several times by bombs of the british and american army. Renovated and rebuilt in 1947, it openend it's doors once again, but only one pool was actually usable. It would take until 1959 for the other two pools to be granted access again. In 1994 this precious treasure of German architecture was closed because of poor attendance and "outdated" appearance.

Until today, a lot of different uses were seen for the old bath. Varying from techno parties to a runway shows, it has seen a lot since it's closure - except water in it's pools or people enjoying a nice swim after a hard day of work. A booster club has been founded for the Volksbad and until a month ago or so, they had people from the club giving tours to freaks like me, for us to be able to capture the beauty of this stunning building for whatever may come after an investor has been found for this poor old bath.

So, technically, this place is not as "abandoned", since some events take place there every now and then. But it's not like it would be on a regular basis or that somebody would care and clean up the place. I still wanted to share this piece of history with you guys, because buildings like this are a total rarity nowadays.

Upon entering this building you feel an immediate suction of the cold air inside the main hall. And that's no surprise, given the way the whole thing was built (as told by the tourguide). To keep the warm air from the heating system inside, back then, they managed to create an overpressure, so that when hundreds of school kids came inside for swimming lessons with their classes, the warm air was basically "pushed out" of the building, instead of the cold air getting sucked in. Talking about swimming, my mother used to go swimming there for p.e. when she was still in school.

But, no more talk, here are the pics I took, hope you like'em! 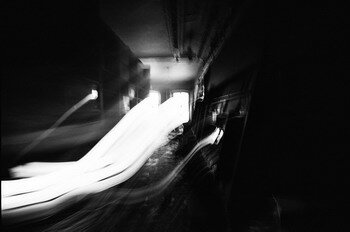