Just off Brooklyn Mountain Road in Hopatcong lies a sight that many locals know of, but few know much about. A curious collection of stonework,
long overrun by tall grass and thistles, sits in an unmaintained field on a partially-wooded plot of land. At first glance these remains look to be those of a small castle,
somehow misplaced from overseas and left discarded on a rural New Jersey roadside.

Though not a terribly large place, making one's way around it can prove a very difficult thing. The field has overrun these stones to the point that when you step,
you are not walking upon the earth, rather you are treading upon the years of dead shrubs and overgrowth that lie beneath the thigh-high grasses. To further complicate things,
the briars here outnumber any other kind of plant-life, and only gets worse the closer you get to the walls of the building. Still, if one persists in circumnavigating these ruins,
they are gifted with a single clue as to what history this place may hold. High up on the eastern-facing wall can be found a large carved stone, a plaque of sorts that simply states; “Oldfield”.

This nameplate, and the remaining weathered stone walls are all that remain of a once beautiful estate, and in fact the first home to be built on all of Brooklyn Mountain Road.
Constructed by Gustave Reinberg in 1896 as his homestead, this grand mansion could once clearly be seen from the waters of Lake Hopatcong, which it overlooks. Gustave was superintendent
at the American Forcite Powder Company. A facility that once operated off of the lake, manufacturing explosives and acids in what is present-day Shore Hills in Roxbury. The mansion remained
in the family from the time of its construction until the 1930's when it was rented out to American Airways, who utilized the beautiful building and property as a clubhouse for its flight crews.
Eventually American Airways no longer had use of Oldfield, and that's where history begins to get a bit hazy. It seems that the building may have stood abandoned for some time after that.
Regardless of what state it was in though, Oldfield was lost to a fire in the 1990's. All that remains today of this once-grand estate are the few ivy-covered walls
which were strong enough to have withstood the heat of the flames.

I decided to submit to the old photos of the last year from one unusual place. 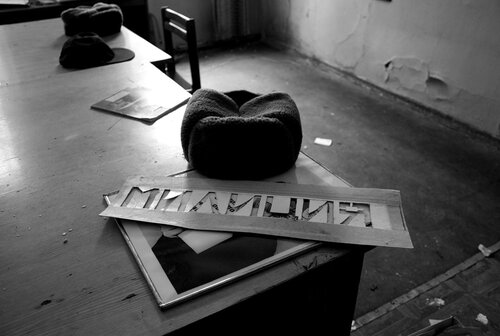