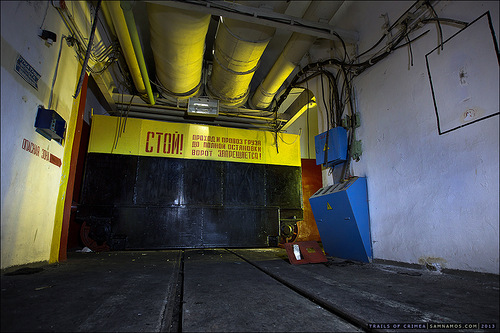 If you drive on the highway, "P35" from Simferopol to Sudak, about 10 km before reaching to the end, moving away from the road inconspicuous, very scruffy time, asphalt track. It leads to the once secret military town - Krasnokamenka located in Kiziltashsky valley, away from other items. Here in the Soviet time, in the strictest secrecy in underground workshops, built deep in the mountains, going nuclear warheads, and then transported to the starting position across the central part of the Soviet Union and some countries of the Warsaw Pact. Almost half a century is a place overgrown with numerous myths and legends, but after the formation of a separate state of Ukraine, and then taking over its territory "nuclear-free status," the city was declassified, and all of the warheads removed to Russia. Currently, a city located in the elite regiment of special purpose "Tiger" Interior Ministry of Ukraine. The main part of the tunnels has been converted into a storage of ammunition and under heavy guard.