This photo (photographer unknown) has been circulating the internet for more than a couple of years now and many people have been interested to find out "where is the abandoned clown train?"
You will find this question asked commonly in google, I recently found the question on Wiki answers, which somebody answered "Most likely in Pripyat", I edited this answer according to my research.
I have put some time into this question -
The abandoned clown train is commonly rumoured to be located in Pripyat, Ukraine and less commonly in one of Japan's many abandoned amusement parks.
I have done research over the past few months and discovered that neither of these are true. 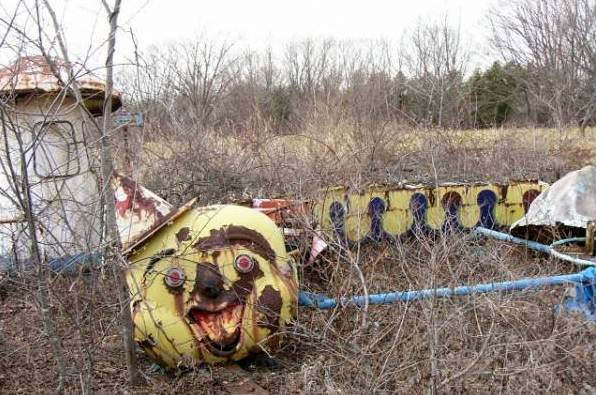 The abandoned clown train resembles a production line by a company which specialised in carousels in North Tonawanda, New York.
Here are the manufacturers - http://en.wikipedia.org/wiki/Allan_Herschell_Company
http://www.carrouselmuseum.org/FindingAid.pdf

There were very few original "Jolly Caterpillars" and "Happy Worms" produced, although there are many modern ones in use today.
A press release in 1954 stated that some of the original caterpillars were sold and shipped to the following locations -

- Some of these theme parks have been shut down while others have got rid of their "worm" rides.


Sightings of "worms" that have been reported -

*North California (scrapyard)
*Benson's Animal Park (name changed to New England Playworld), New Hampshire - closed 1987, sold rides in auction and abandoned others in nearby forest.
*Kiddieland, California (vintage caterpillar)
*Conneaut Lake Park (still in use, bought from one of the Kiddieland parks - possibly Chicago)
It is believed that Kiddieland is/was a franchise and more than one of them had a "worm/caterpillar".
*Enchanted Forest Playland, Toledo, Ohio (abandoned park)
*Westview Amusement Park, Pittsburgh
*Ahern's Playland, Stratford, Connecticut (vintage caterpillar) (closed down)

The abandoned clown train could be one of the worms, each one was different and this one was a worm dressed as a clown, which was out of theme from the others, nobody knows which park bought which worm or where the clown worm has ended up.
A lot of them were bought by travellers in the USA and may have been abandoned on a site when they ceased to work any more.

It is a fun thing to investigate if you would like to discover which worm is the clown.
I can confirm that it is NOT any of the following - 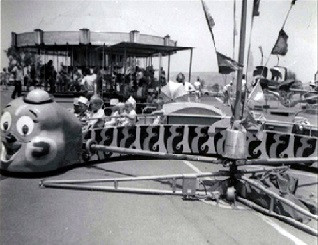 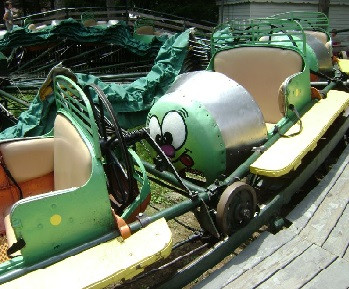 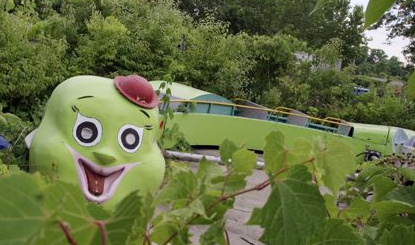 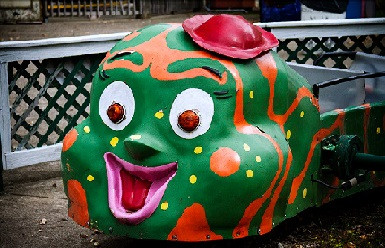 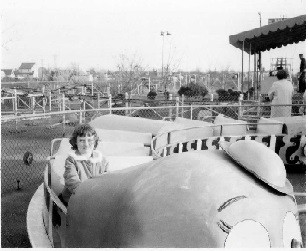 There are many more of these still in use today, you can easily find them by searching "Jolly Caterpillar" in Google images.
The best bet would be to look into the 1950's production line which is listed under the photo of the clown train, it is most likely to have been produced with the original "happy worms" and "jolly caterpillars" in the 1950's as opposed to the more modern designs which you can find in your search engine (If it's one of the NY produced worms).

I suspect that it is either in the USA or the one in Canada. Good luck in your searches!

There is a list of disused amusement parks (including the ones which aren't there any more), there are so many and some of them closed so long ago that there would be no way of finding out all of the amusement parks which had jolly caterpillars unless you did more in-depth research and asked the elderly who used to go to these amusement parks.
http://en.wikipedia.org/wiki/List_of_defunct_amusement_parks#United_States_of_America

I found a photo of Gooding's Midway Amusement Park - I can only hope that this is a breakthrough, which I am searching more into. The ticket booths in this image look like a similar design to that of the clown caterpillar, perhaps the clown has a mushroom theme because it relates to the particular park that it was sold to? https://picasaweb.google.com/lh/photo/prhf0LBj5EtAbVE6AN8jog

There is new evidence which points towards this caterpillar's origin!
As some of you who have helped greatly by commenting with your research have pointed out, there are significant differences between the clown train and the jolly caterpillars from New York. There appears to be a pattern in the designs of their caterpillars, such as the shape of the caterpillars' faces being of a particular design which has it's differences from the seemingly unique clown train.

The biggest breakthrough we have achieved together is that the ride with the closest design to the clown is in fact in Africa! There must have been another company which took on the design as a 'bootleg' and built rides in Africa.

Here is the ride spotted in Pemba, Tanzania, an African island.
The similarities are remarkable! We now believe that the clown resides somewhere in Africa originating from the same manufacturer as this one.

Guys, there appears to be another breakthrough in the search. The photo was first uploaded on-line in 2008 to a private website. The person who uploaded seemingly the first image asserted that the clown train was in Northern Korea!
If he is the photographer behind this image, then this is our answer!
I have looked at abandoned theme parks based in North Korea. He stated that it was "near" Pyongyang, the capital of North Korea.
Here is another image from that same "FunFair" (description used by original uploader). 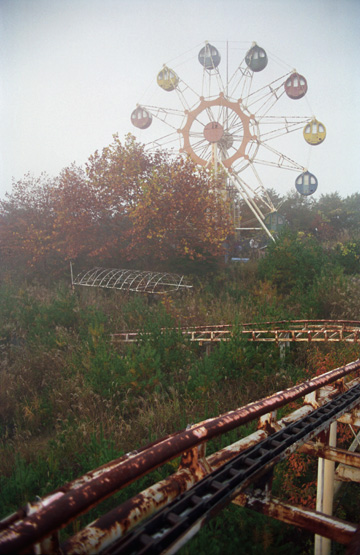 Don't let the ferris wheel confuse you in your searches, it's a popular design in Korea and there are many other parks with a similar design.
A name that came up in my search was Kaeson Youth Park, but I can't confirm that it's the correct one. The search has become more difficult since 2012 when Kim Jong Un demanded that all the abandoned amusement parks around Pyongyang were to be restored and now most google results seem to be hiding the fact that any of them were ever abandoned (excluding the images uploaded by visitors). In fact, Korea has been completely removed from the list of abandoned amusement parks, despite having one of the world's creepiest abandoned amusement parks located in Okpa, South Korea (not the park we're looking for).

So there's been a minor cover-up and it's been made-believe that all of Korea's amusement parks have always been great attractions and still are! Although, Kaeson Youth Park was restored in 2010, 2 years before the demand to rebuild them all.
When the photograph was uploaded it was described as a "long abandoned" FunFair, which the State could no longer fund, I'm hoping that this description will be valuable information to lead us to the correct park. Kaeson Youth park was built in 1984 and according to some sources, some rides were restored in 2010 and they bought more rides for the park to open it to the public again. It could be a different park, so don't take my word for it that Kaeson is the correct park, this needs further research.

The train looks isolated in the photo, so if the park has been restored, we still don't know if the train was scrapped or just left out in the wilderness and closed off.
It almost looks like it had been 'put out of the way' before the park closed, perhaps it had broken down before the place closed it's gates.
Collapse