The origin of this place go the whole legend. On one of them - the center of the modernization of the person on the other - a laboratory for the production of biological weapons. But failed to install - it is a laboratory for the study of viral infections. The main activity was the development of a vaccine, "Anti-AIDS". But first, the 90 all disappeared somewhere, leaving the lab intact. According to the official version there was a fire and from that day the institution was closed. That could really happen is anyone's guess.
Until recently, the building stood untouchable until the path to it is not trampled lovers of urban culture and other "children" of iron and concrete. Today Dorval teenagers disemboweled windows and overturned crates, but there really is to see what. On the way to the place of overgrown bushes, meets smell that initially rveshsya close the nose, but eventually you get used to and stop paying attention. From the entrance and up to the top of the mountain road bed of disposable gloves and respirators. Inside the building, get a variety of thoughts, and the level of adrenaline on the order increases. Inside, everything froze, then ran like yesterday Ellis of "Resident Evil", are scattered everywhere tubes packed syringes and corridors made by cells. At the sight of it all at once is the picture, as there are hard at work, all in white coats are worn, carried out the experiments. In one room door lies the very same metal cages. Making his way through them - you get to the operating room, where the nose beats the smell of medicines, which, apparently, more than 15 years, has not disappeared entirely. But the most extraordinary picture of waiting in the attic - all those same cells, but hung with tags: "08.05.1990 - AIDS", "03.02.1991 - CANCER."
The place is extremely unusual, hypochondriac people with weak nerves and I do not advise to visit.
1.  The elevator for transporting medicaments from the basement to the first floor.

June was a fun month for a lot of reasons, but a big part of it was finally getting into this 18 story behemoth of an abandoned psych center in my hometown. I've been waiting for a chance to enter this place for years and, while there was little left in its uniform, institutional halls and tiny patient rooms, it was still pretty interesting to see where so many people had once sought aid for mental and emotional issues. One of those people was my mother, so it was also a little more personal for me.

Anyways, I didn't get a ton of shots inside the building, but I'm happy with the few I got :) 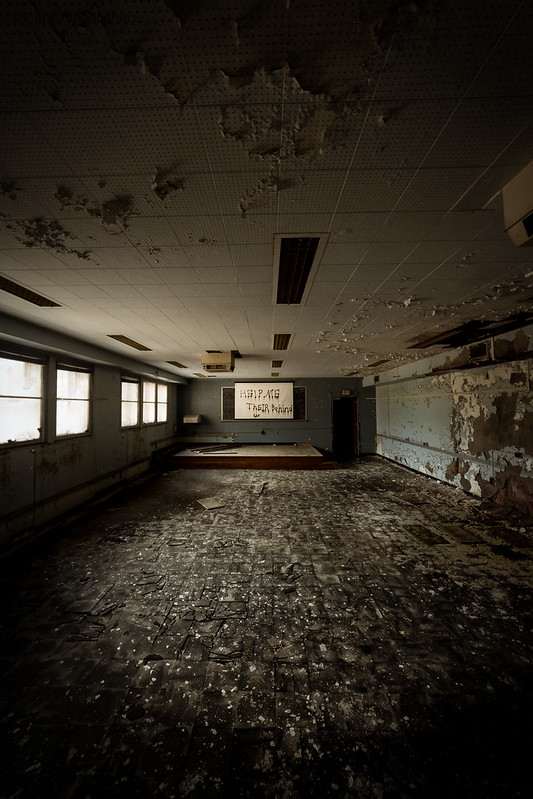 "Wreathed in Decay" - A fun little message for visitors. I was really tempted to fix the grammar ;)