OK. I will continue to introduce my Night Watch a photography series about mystic, abandoned and historical places at night.

The second one is the orthodox church of St. Nicholas in a small village which is not so far from my previous manor of Śviacki in Płamia village.

On the cliffs above the French port of Fécamp (on the English channel) are perched a whole series of German "blockhaus" from the Second World War, built in 1942 in anticipation of an Allied invasion, and forming part of the "Atlantic Wall".

The bunkers and other installations nearest the road are locked up, but farther out along the cliff edge we found an observation post we could get into.

It was a strange experience: in the photos you see everything thanks to the flash, but it was pitch dark, we didn't have any kind of light and we could see nothing at all in some of the rooms and very little in others. So we navigated by camera, taking a flash photo of the floor in each room before stepping into it!

The observation post from the outside, with the sea in the background
1. 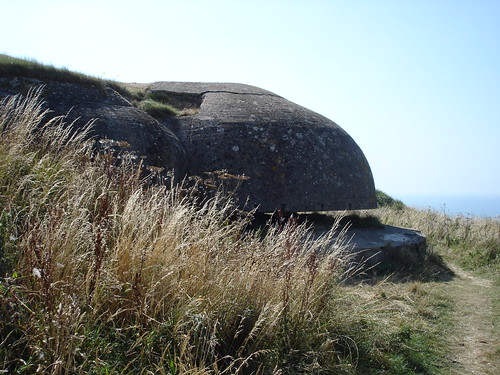