Fading into the past, 43 year old mural Isle of California, all that are left are pigeon holes.. 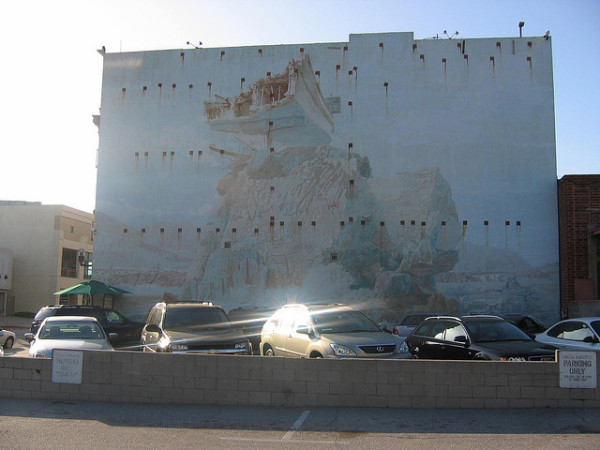 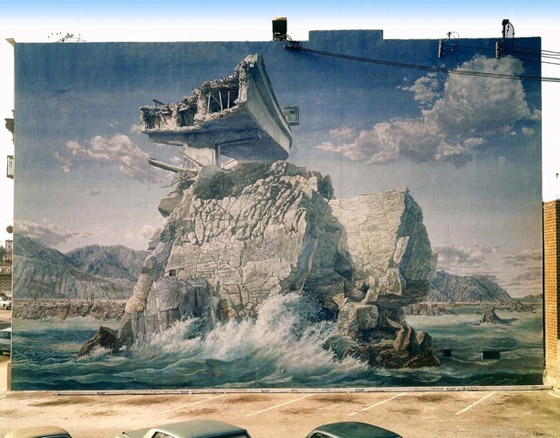 One of the most famous of all Los Angeles' murals is "Isle of California" (1972), the work of Victor Henderson, Terry Schoonhoven, Jim Frazin of the L.A. Fine Arts Squad. "Isle of California" is a mythical vision from the California/Arizona border when California becomes an island after "The Big One" (the term used to described a future major earthquake). The mural is located at The Village Recording Studio at 1616 Butler Avenue, literally just a few feet away from Santa Monica Blvd in West Los Angeles. If you want to see what "Isle of California" originally looked like, head on down to the Venice Beach. There's a much smaller version of the mural featured in some tile work along the Boardwalk.

L.A. Fine Art Squad carried on their work with a Series of increasingly Surrealist Trompe L’oleil works, mainly in and around Venice. Their murals perhaps never reached again the Epic Timeless Irony as Isle of California conveyed. In the same Seventies down the Road in Zuma Beach another L.A. Poet Laureate Artiste expressed much the Same Sentiment on his Classic California album Time Fades Away, Neil Young. The throwaway world of 2011 Current World Events and an Impending Doom of THE BIG ONE ~ Itself a California Icon, are what makes Isle of California 1970-1972 one of L.A.s most Legitimate Urban Artworks link