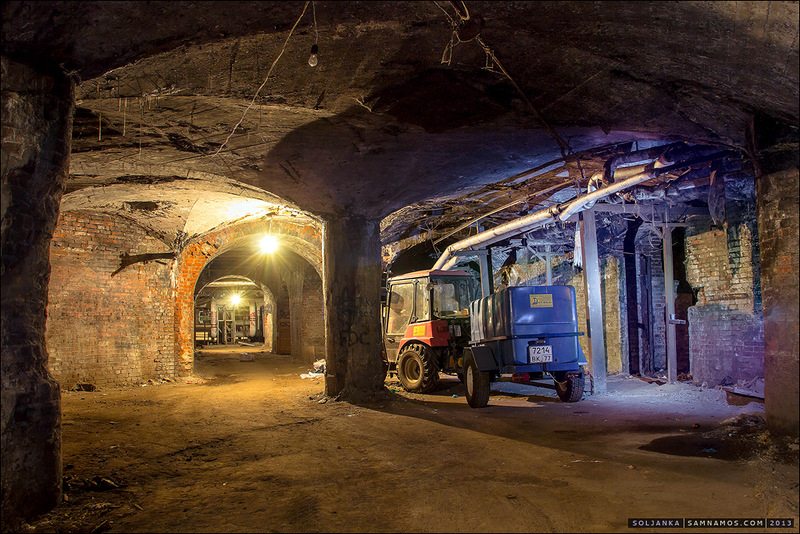 This review is about the complex of tenement houses, and the legendary historical system dungeons located underneath. The history of quarter goes to the origin of the street name. Around the XVII century , at the corner of present street . Halophytes and st. Zabelina was built great , by those standards , stone building with commercial trade pavilions and a large courtyard . Place in a short time became popular among residents and received name "Salt fish yard." Shopping arcade repeatedly rebuilt and expanded , but in the absence of comprehensive repair , eventually decayed. Merchants company has repurchased fully hydrochloric yard that the beginning of the twentieth century was falling apart , as each specific location owned entrepreneur and local council could not recover from each funds to repair the building.
In 1913 the yard was completely disassembled to foundations, and in the former Salt series built multistory apartment houses for the Moscow Merchant Society in the neoclassical style . Under the houses were built spacious cellars with high arches . Interesting fact - to strengthen the old foundations required huge funds , so plan basements in some places did not change . The main difference with current old cellars - no sectional division. In the courtyard of salt each shop had its own fenced off cellar.
Originally spacious premises used for house and food warehouses , but later settled here underground garages and workshops for the needs of Ministry of Internal Affairs . However, because of increased moisture , dungeons were eventually abandoned. Empty cellars steel habitat looters and robbers car . In the former underground garages versed stolen from city streets cars and motorcycles . After coming back adjustment system was abandoned and gradually gets cluttered with debris that is removed here from the street and from waterlogged - for negligence utilities - communication here a long time have not been repaired .
In the early 2000s suddenly remembered about cellars and even showed a number of reports on television. Since then, the beginning of a new history list - caused excitement among dungeon newly " researchers " with a light hand received laconic name "Soljanka" . Here repeatedly going youth groups and even arranged illegal squats . Accumulated over decades of garbage more than once ignited drunken teenagers , thereby causing outrage residents of neighboring houses . Around the year 2008 reached a peak of outrage - the last straw was arson smoke signal . Manipulated bodies were taken drastic measures. Mothballed system literally embedded numerous descents from the lower floors of houses and holes in the street.
Many years cellars remain difficult to access for illegal visit. Recently I managed to visit the updated " Solianke ." What I saw is very different from the state in 2008 when the system was the stench and dampness and debris in some places reached almost to the vaults. Home Gallery dramatically cleaned , strengthened vaults and shifted communication. Part spaces now engaged to a parking of special transportation. In most of areas there is a light.