I know I said I would upload these a month ago, but life just kept on getting in the way. These are photos from my second trip to this refractory, while photos from the first can be found here.
Read that post for a more in-depth history about the place, but now I can add that it was open until at least 1992 judging by paperwork scattered around that I didn't get a chance to look at originally. I also went and visited an abandoned house on the property this time around (as it looked inhabited from a distance last time) as well as around the expansive clay pits.
( Collapse )

While recovering data and photos from a dead external drive I found a few sets needing to be re-edited and uploaded.

Driving the back roads between Huntsville and Florence, my wife and I saw this 1950's era farm house. Despite the storms and tornadoes that frequent the region, this little brick house seemed to have been much loved. It sat forlorn on the side of a busy highway in the February chill. Road improvements cut off the driveway and raised the roadbed nearly 2 feet (.6 meters), so I had to park my vehicle a little ways from it and walk in. 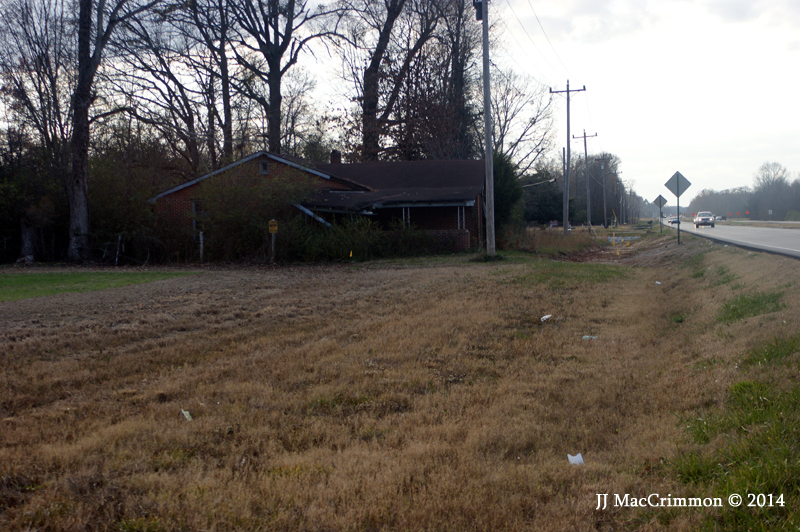 Finally got around to creating a new entry. With all the work Christina and I have been doing in regards to our Greystone film, we have had little time to post about much else (not from lack of content! We're sitting on nearly ten locations worth of media). This will change, as we plan (hope) to have regular updates from now on.

That being said - Here's a short entry about a very old and very overgrown farmhouse which has been touched by the "Profane Poet". If you don't know who it is that I'm speaking about, all the more reason to check out the entry

Ever since we were first exposed to their writing nearly ten years ago, we have kept an eye out for any locations which may contain traces of work by a person who we have come to call the “Profane Poet” - A vandal who's trademark is obscene gibberish feverishly scrawled in oft times the most peculiar of places. Be it the inside of kitchen cupboards, under a toilet seat, upon the ceiling, or at times all of the aforementioned at once. The very best example we have found to date is the Rutherfurd Stuyvesant Estate, a place so covered in obscene and hateful writing that it can make one uneasy.

What initially attracted our attention to the work from this individual was, admittedly, the excessive vulgarity of their writings. However after you spend some time studying all of the hurriedly scribbled outbursts, it becomes more and more apparent that the person behind the writings isn't doing this to get a rise out of passers-by. The messages begin to take on an air of deliberate anger, directed at a specific person, or very small group of select people. It seems the author doesn't care who may or may not read their writings – The messages are composed in a burst of anger and seemingly intended purely for the individual who they are focused on whilst writing. It's then that you begin to see through the humorous over-the-top collection of profanity, at what may very well be the eerily violent ranting of an unhinged mind. To further add to the unsettling nature of this unknown individual, we have witnessed that over the ten years since we have been observing these writings, that the author returns to locations which they visited years prior, and traces over any text that may have faded.

This small old farmhouse only bore a few markings from the “poet”. Aside from the vulgar scribbling, on the whole the place was actually quite picturesque. A massive patch of ivy has come to ensnare a majority of the house's fieldstone walls, turning its interior into a perpetually enshadowed cave. Relics of the last family to call this place a home were sparse, however the few things that remained were just enough for the imagination to latch onto.

We have also come upon work from the ”poet” at the House of Filth. Though, like this place, the writing was only in isolated locations throughout the building.