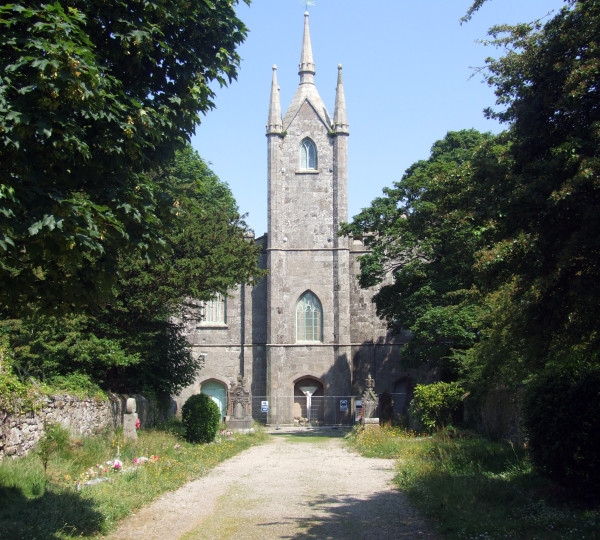 Yesterday, I visited St Day Old Church, which has been abandoned for sometime.  The webpage GENUKI: St Day has this to say on the subject:

Church is dedicated to the Holy Trinity and the registers date from 1833. The building is of stone in the Gothic style; it has always looked imposing, both from close at hand and also from a distance with its towers and pinnacles adorning the landscape. The main walls, towers, pinnacles and castellettes are constructed of cut granite which, apart from some isolated surface erosion, is now as good as the day it was built. Restoration works were carried out in 1891 and a new pulpit and other furniture were added in 1897. A "new" system for heating the building was installed in 1911 and coloured glass windows set in sandstone window mullions were added, dedicated to the memory of Sir Wm Williams Bart, Lady Williams and Mrs Buller in the 1870s and 1880s.

However, the collapse of the mining industry in the 1870s caused massive depopulation of the area and it is understood that questions arose among the Church Commissioners as to the necessity of maintaining such a large church. The refurbishment works carried out in 1931 included the removal of a mezzanine gallery which had had a stiffening effect on the slender brick built columns supporting the high double valley roof, thus causing inherent weakness. This defect was seized upon by the Church who obtained a report that the structure was unsafe and a further report that the granite was "pot" or mined granite and therefore liable to serious erosion.

The present church is a gothic structure, and had four stained-glass windows, and an organ. The graveyard was virtually full by the turn of the 20th century and the church was finally closed in 1956. In 1985 vandals caused the fall of a small section of the roof and a decision was taken that the rest of the roof structure be dynamited. The pulpit, and possibly the lectern were removed to St Euny Church in Redruth. The font is now in several pieces, and the single bell has been stolen. Work started in September 1999 to stabilise this derelict ruin so that it could be used for open-air concerts and events. It is also planned that the church building become a centre for the interpretation of the Mineral Tramways routes around the St. Day area.

This FORMER church of the Holy Trinity is open during the summer months (Approx. Easter to September). It is held on lease from the Diocese of Truro by the Trevithick Trust and is no longer a church.

A former villa and seminary that had fallen on hard times, even before a we experienced a couple of major earthquakes. It's a good place to do search-and-rescue exercises, though!