I lived for a while in the 1980s in the Phoenix, Arizona metro area -- mainly to go to graduate school and get my career started. At the time I lived there, the old highway -- a combination of US-60 US-80, and US-89 -- came into the Valley of The Sun from the East, through the then small towns and cities of Apache Junction, Mesa, Tempe, Phoenix, Glendale and beyond. The roads street names changed as it progressed Westward --  Apache Trail, Main Street, Mill Avenue, Van Buren Street and Grand Avenue. It was the main road before the freeway(s) that made the Phoenix Metro area sprawl and feel like Southern California were built.

Back then, out on the Eastern edge of Mesa along Main Street was a string of great old motels, many of which were still operating in the 80s, including this one, the Buckhorn Baths. 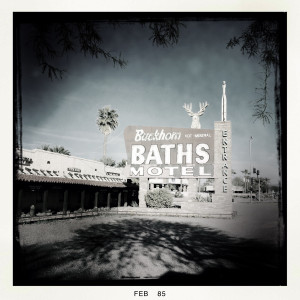 What was cool about Buckhorn back in the day -- aside from its massive neon sign, complete with a neon buck and antlers -- was that not only was it a motel, but it had hot mineral baths, AND a "museum" of oddities -- like mounted deer heads, and other stuffed animals (stuffed by the owner himself), weird antiques and historical items. It sprawled over a number of acres, with motel rooms and cabins of various shapes and styles. This view shows most of the property behind the sign and the front building which housed the office, museum, and baths. 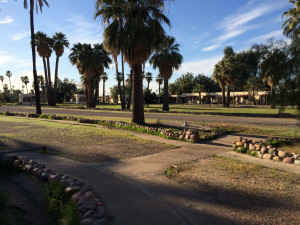 It was opened as a trading post in 1935 by Ted and Alice Sliger. In 1939 they found hot mineral water on the property and opened the baths and motel. It became one of the early home-away-from-homes for major league baseball teams, with the old NY Giants wintering there starting in 1947 and helping start the Cactus League spring training teams.

Alas, in the early 80s Maricopa County passed a bond to build a few hundred miles of freeways and paved away with a vengance, and people stopped traveling the old road to get from the East end of the valley into town. In 1999 the baths closed, and in 2006 the motel shut down.  The owner, Alice Sliger passed away in 2010 at the age of 103 and the place became abandoned.

The city of Mesa is working with the estate of the late owner to purchase the property and preserve it somehow.  Mesa voters in 2010 passed a bond to purchase the property, so there is money to buy it, but not restore the buildings and baths. It is listed as the number one most endangered example of classic American roadside architecture by the Society of Commercial Archeology.

Hundreds of celebrities and baseball players have soaked in it's baths over the years -- even a young John F. Kennedy was rumored to have stayed here after WWII to soak away his injuries. I never had the opportunity to stay or visit the baths when I lived in Phoenix, being a poor starving graduate student at the time. I wish I had.

I had the chance to explore what is left of my old college home town (I moved away in 1989) last month, and was glad to see the Buckhorn's sign still standing, albeit broken and faded. And the buildings and grounds are still there, rotting in the sun -- it's old cabin's still standing but the lawn and grounds mowed and tended (I assume by the city of Mesa). I wandered around and took a lot of exterior photos -- I couldn't see into any of the windows of the museum or the bathhouse which have been silent and still for many years. The window and door of the main office, though dusty, offered a glimpse of an old cash resgister and postcard rack. It was quiet and warm and I was the only one there except for a stray cat, and the noise of the traffic on Main Street. 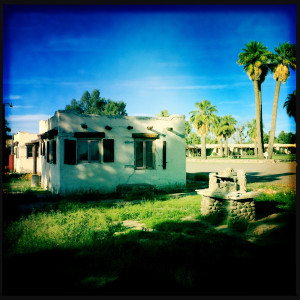 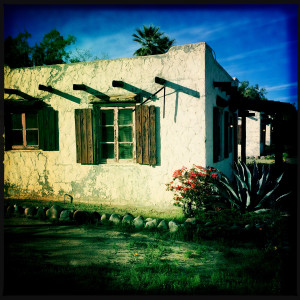 Unfortunately, much of the old roadside architecture of the Valley of the Sun is gone -- lost in a region with a zeal of commercial buildings and no heart for preserving the past. The Phoenix metro are for the most part is a collection very modern cities that unfortunately I find lack any kind of a soul.  As Gertude Stein once said about her hometown of Oakland, "there is no "THERE" there." This pretty much describes the Valley of the Sun today. Fortunately though it appears that the Buckhorn Baths will somehow manage to be preserved as a reminder of that glorious 1940s/1950s post war road trip past, and we will owe the voters of the city of Mesa a big debt of gratitude for their efforts.
More pictures of the Buckhorn after the cut. For those interested, I shot these using the Hipstamatic app on my I-Phone 5S, which gives them the tint and coloring and classic snapshot feel. I have a good collection of photos of abandoned places that I've shot using this app on my personal web page. http://www.grgardner.com if you'd like to see more.
( Collapse )
Collapse