In addition to abandoned places, I've always been fascinated by railroads and mines and giant equipment and the whole process of extracting and transporting minerals and products. This past summer while on a trip to Central Utah's Carbon County I had a wonderful opportunity to combine both, exploring an abandoned coal mine and the railway that served it -- and playing railroad engineer in a rented Jeep Cherokee that I'm sure Hertz had no idea would be prowling along 10 miles of abandoned roadbed up to an old coal mine. 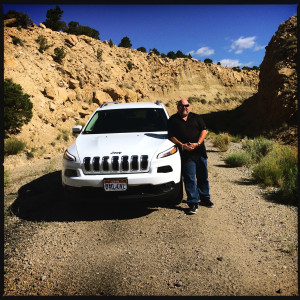 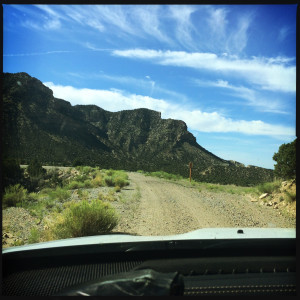 I was joined by my best friend Dave who shares this same fascination as I do.  We had planned on scoping out what's left of the coal mining industry in the appropriately named "Carbon County" area of central Utah near the town of Price. This area once had hundreds of coal mines, and now like much of Kentucky and West Virginia, is hurting because demand for coal has slowed to a trickle.

About 25 miles East of Price are the towns of Sunnyside, and East Carbon -- at one time home to several large coal mines and now pretty much ghost towns. We had planned on trying to find any signs or remnants of the mines but couldn't, but in the small settlement of East Carbon we did find what was clearly at one time a railroad grade that had been converted into a trail for small motorized vehicles such as ATVs and motorcycles. We headed off towards the South on the old grade which was smooth and wide enough for our Jeep, through cuts and over culverts that carried the sporadic water that came down the desert washes when it rained. The roadbed wound along the edge of the Book Cliffs, and crossed some big gullies on fill (thankfully no trestles which would have been impossible for the Jeep and likely made Hertz and my insurance company upset). Because it was built as a railway the grade was very mild, and folks who like riding the desert on ATVs had made good use of the trail although we were the only ones on it that day. According to Dave's map, the roadbed would take us about 6 miles to where the Geneva mine once was. We were traveling at about 20 miles an hour, and it wasn't hard to imagine that we were pulling a long train of coal hoppers towards the mine.

Sure enough the old roadbed curved into what the map said was Horse Canyon and ended at a large flat spot that was apparently a staging yard and where the loading facility once existed sitting next to a state highway. I had suspected we were on the old Carbon County Railway, and we quickly confirmed this when we got to the mine site.  This was the end of the line for the Carbon County Railway, at one time a subsidiary of United States Steel. It was built during WWII to provide coking coal for the large (also now abandoned and reclaimed with no sign it was ever even there) Geneva Steel Mill in Provo, Utah, some 100 miles Northwest of where we were. 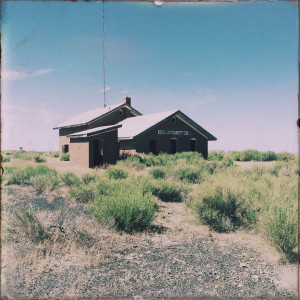 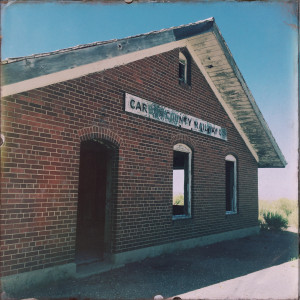 Operation headquarters for the Carbon County Railway were located back at East Carbon in this handsome red brick station that is still standing. After we explored the mine site we drove back to East Carbon where we spotted it a mile or so from where we first drove onto the old line.  A daily train of some 30-50 empty coal hoppers would leave here every morning and make the six mile trip to the mine for loading, and then return by mid-afternoon and be left at an interchange with the Denver & Rio Grande Railroad's Sunnyside Branch which is just a bit North of the old depot.  The Rio Grande would then take the train West over Soldier Summit to the steel mill in Provo and return the empties the next day and pick up another loaded train. This lasted until October of 1982 when the mine was shut down and the railroad abandonded. The steel mill lasted until 2001, and the rails and cross ties of the Carbon County Ry. were pulled up in August of 2008.

Back at the site of the Geneva Mine at the other end of the Carbon County Ry., there is no sign of the loading facility or the actual mine itself -- with the opening sealed shut and graded over and the loading facility torn down in 1990. However a large number of office, warehouse, and other support buildings still exist at the mine location, baking away in the Utah desert. Dave and I spent several hours walking through this complex.  The mine itself was started in 1942, and at its peak produced 8,500 tons of coking coal a day to feed the furnaces at the Geneva Mill. 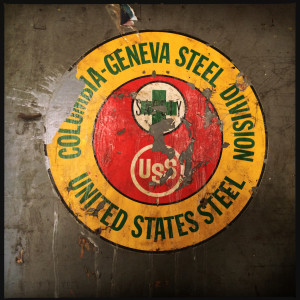 After the cut below are a number of pictures of the interior and exterior, as well as some historical photos I found online of the mine buildings that remain at the Geneva Mine, where at one time where several hundred miners toiled deep underground, extracting black gold to be hauled by the Carbon County Railway and the D&RGW to what was once the largest steel mill in the US west of Pennsylvania that at one time produced 60% of the steel in the Western US. For almost 40 years, all through the 1940s and up to the 1980s this was a beehive of activity of miners and railroaders, and today is but a dusty roadbed and complex of sturdy red brick buildings baking in the hot Utah desert. With a little imagination though one can see the miners working and you can pretend to be the engineer of a coal train, trundling along the Book Cliffs of Utah with a load of coal.

(The source of much of the history and the historical photos is here: http://www.utahrails.net/utahcoal/utahcoal-columbia-geneva.php#geneva on the Utah Rails Net site maintained by Don Strack)