bunn at Halton Quay
At Halton quay, there is very little, apart from this very small chapel, which claims to commemorate St Indract and his sister St Dominica, saints and Irish royalty, who arrived in Cornwall in 689AD. Very little of note has happened since this very firm and established event, is the impression you get from the sign.   Wikipedia, on the other hand, seems very reluctant to even admit St Indract was alive in 689AD, so who knows.

Supposedly, they brought Christianity to the pagan Cornish, although I'm not entirely sure why the Cornish are considered to be pagan at this point, since presumably Cornwall converted to Christianity along with the rest of the Roman Empire via the Edict of Thessalonica in 380AD.  But perhaps there were backsliders. Or if St Indract has slipped through Cornish history by two or three hundred years, in the slippery manner common to obscure saints, it may be that the pagans who martyred him were Anglo Saxons and not Cornish at all.  But that would mean this chapel is on the wrong bank of the Tamar, which surely cannot be true.  Look at it standing there, quite convinced it is in the right place. 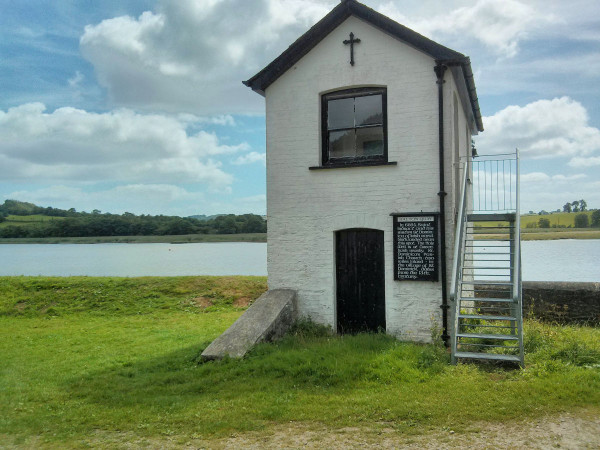 We were here to canoe, of course, rather than to celebrate St Indract.  Halton Quay is rather a muddy quay, even at close to high tide, and we did carry some of the mud with us into the Queen Emma on our shoes.  The quay is also rather ruinous.  There was clearly a slipway here once, but there is not a lot left of it now.  But there was enough muddy beach to launch the canoe from.