The abandoned mansion of count N

From time to time in Russia can be found unusual places. This mansion is such a place. 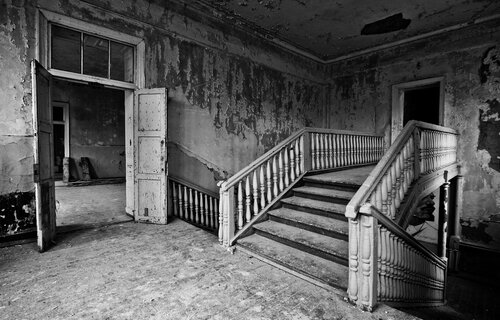 So dark and empty unusual place I have not seen a long time. Immediately comes to mind a similar spot, visited back in 2010 - an abandoned children's hospital/school. What we can see here? The gloomy weather, the clouds in the sky, a wide-old gate, fir alley which leads to the main house. Wet dew under the feet on the grass, at the end of the alley a gloomy monument is not the young pupil of high school Volodya Ulyanov (in the future - Lenin), not the nameless pioneer, minus nose. The silence around, a huge mansion in front of us. Quietly beginning to rain, and I want to have more get inside, to know that hides the mystery house. And behold, a small loophole was found, and we are already in. Stunning staircase leading us to the first floor to the second and the third. Huge rooms, where previously played music, conducted the wedding. A little later, all was silent, 1917-th year...the rest House, a school for children with disabilities. A Palace got kids. The years pass, the house gradually deteriorates, and that's the new coups, there is neither merchants, no people, no children...Just empty the house is in a Russian province, close to the lock and thrown to the mercy of fate, all the same fir alley away from the gate to the house, and the monument in the middle of the front of the mansion of the court as a reminder of bygone past...

1. We enter the old gate and go through the dark fir alley. Soon in the distance is shown gloomy count's mansion. 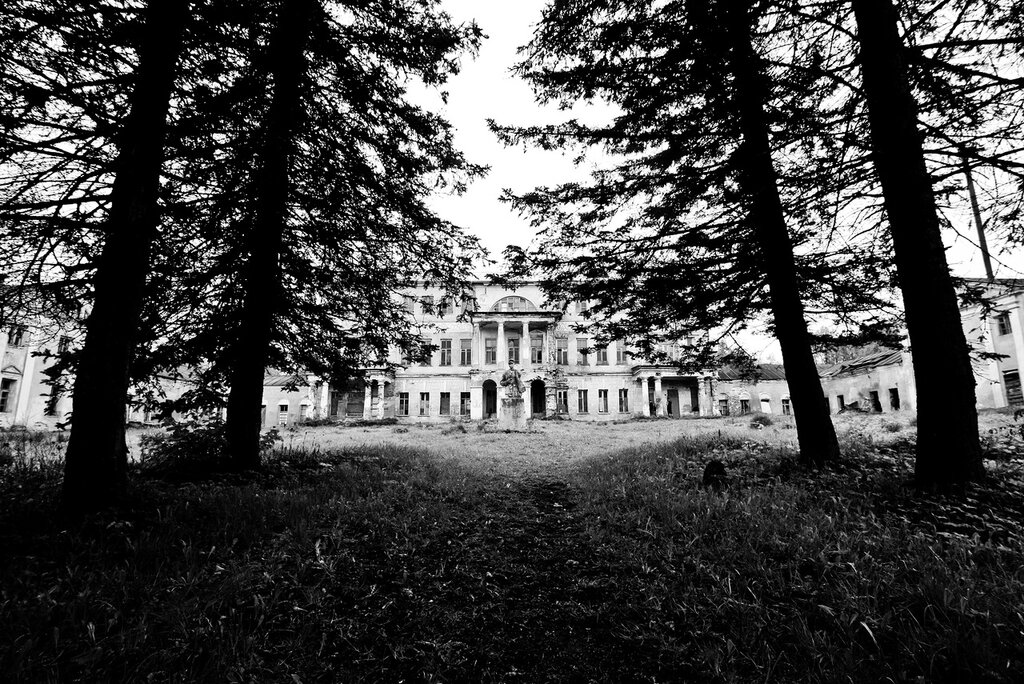 2. And here's a silent guardian of the estate. Who is it? Unnamed young pioneer ? Volodya Ulyanov? 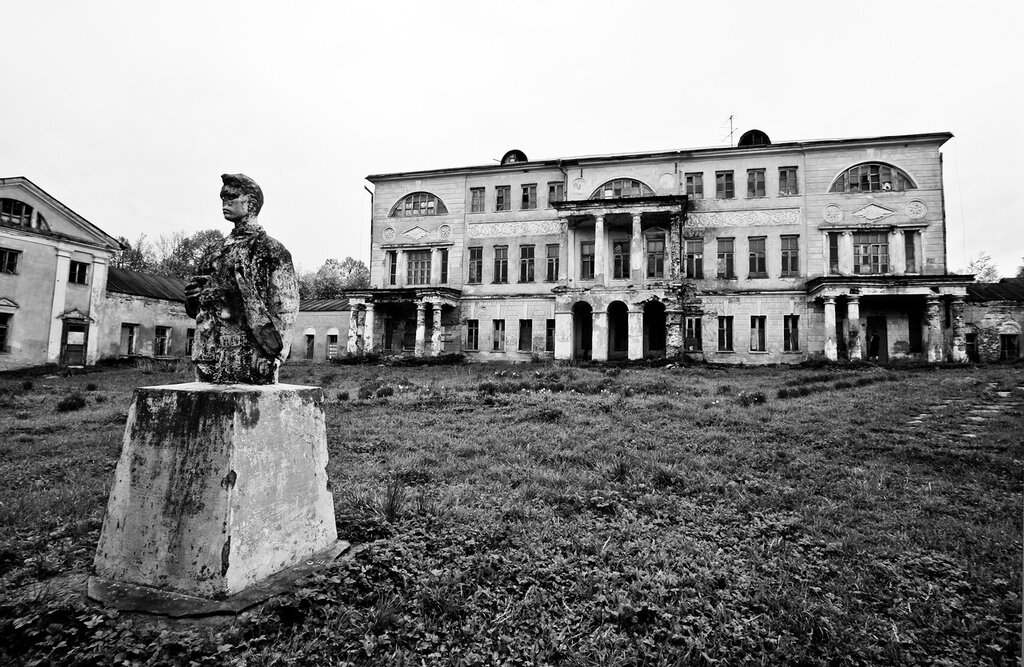 3. Soon we get inside the house. The first thing we pass in the former kitchen. All of the cast, rusty exhaust, the old plates. 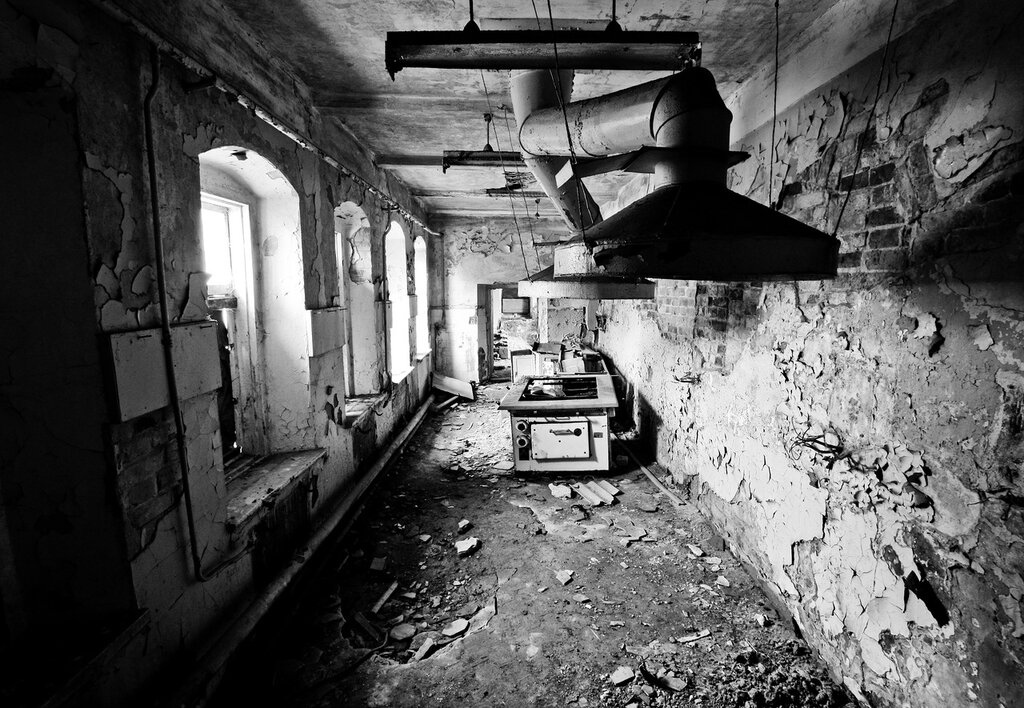 4. From the kitchen out into the great hall, to the left from the front door of the mansion. Vaulted ceilings, emptiness and an unusual form of the passage in the following part of the estate. 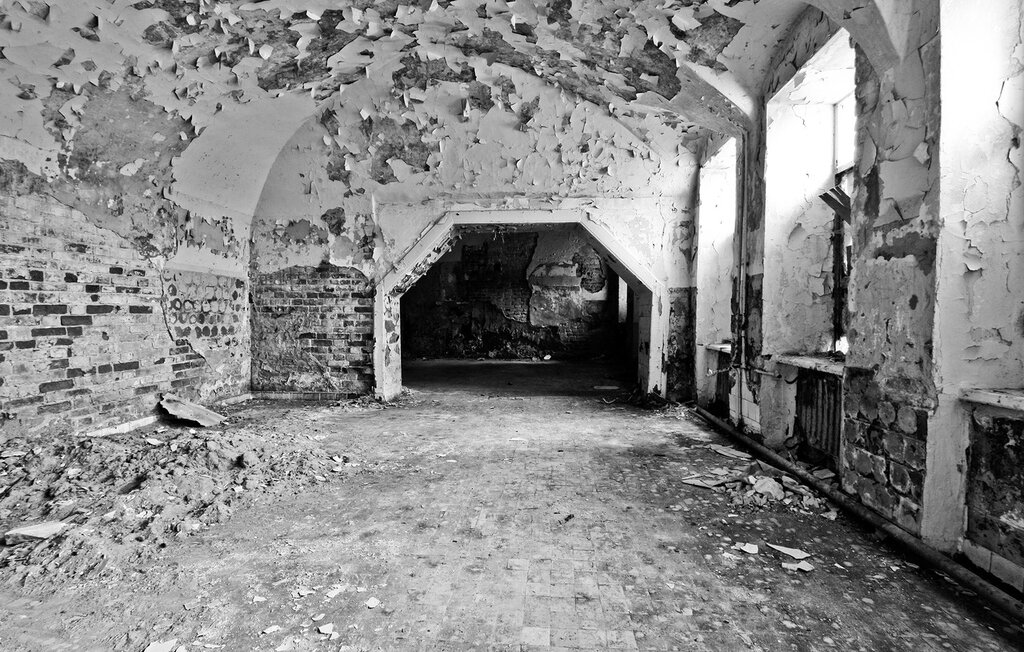 5. Soon we find ourselves in a corridor, in which before the servants were all necessary to their masters. Now it is very uncomfortable and I remember the stories about ghosts in the castle. Not a particularly wide passage, dark corners, peeling paint on both sides of the walls as if trying to reach out to us... 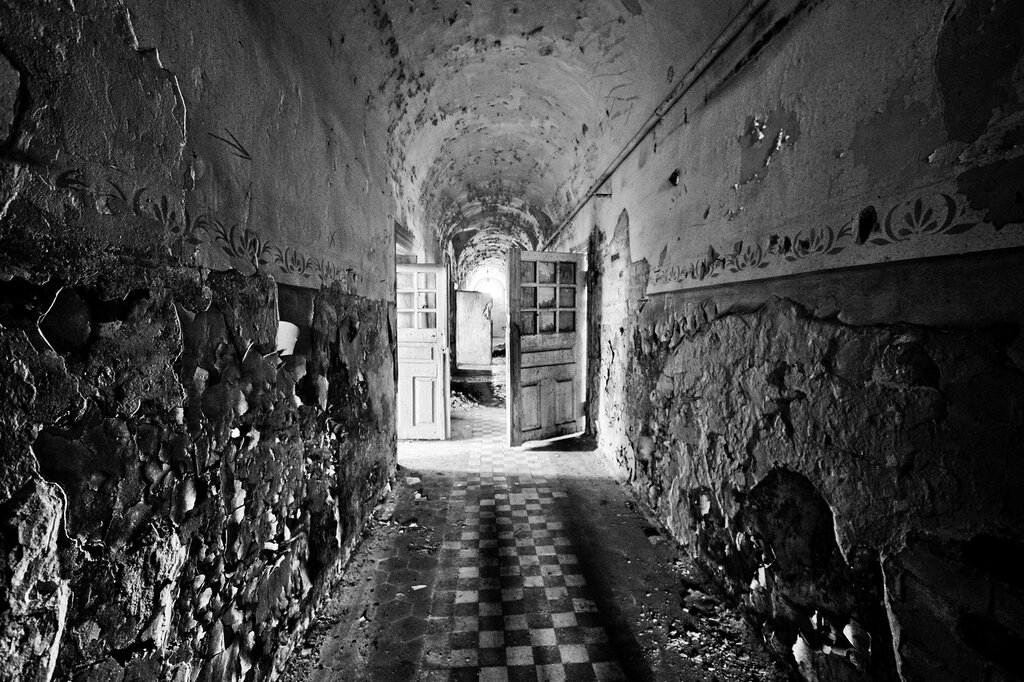 6. But here's the first floor is passed, and the old beautiful stairs we climb up to a well-lit the second floor. The Windows are beautifully decorated with decorative columns on the sides. 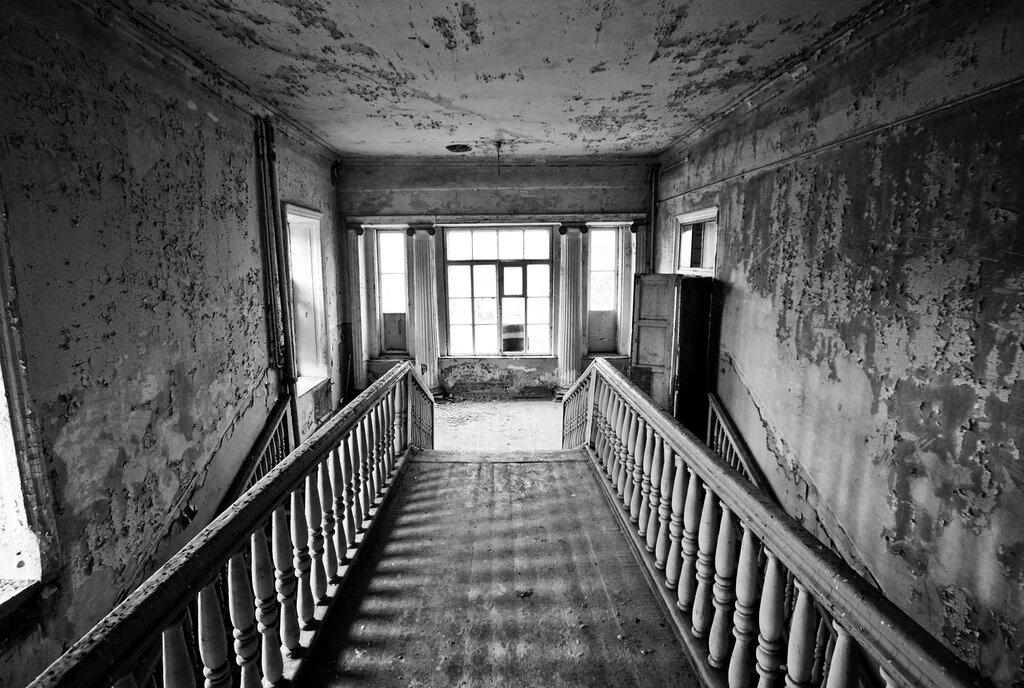 7. The Central hall of the manor. Beautiful picture on the wall reminds us about the past greatness. Several alarming children's palms on the sides of the painting. What is it? Jokes restorers? Greetings from the soviet boarding school? 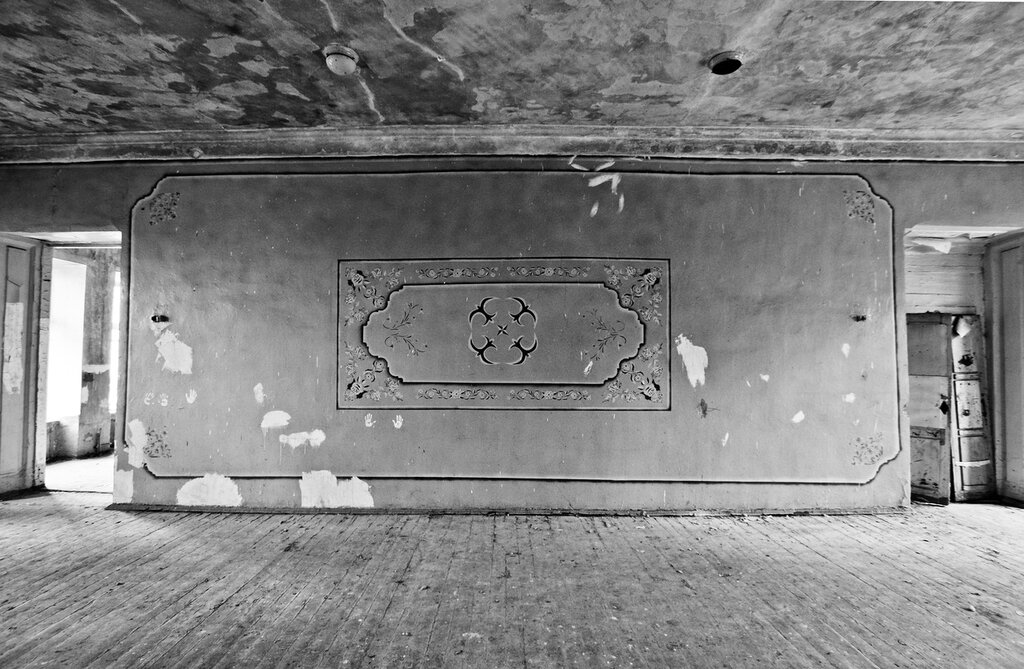 8. After inspection of the other halls are back to the main staircase. 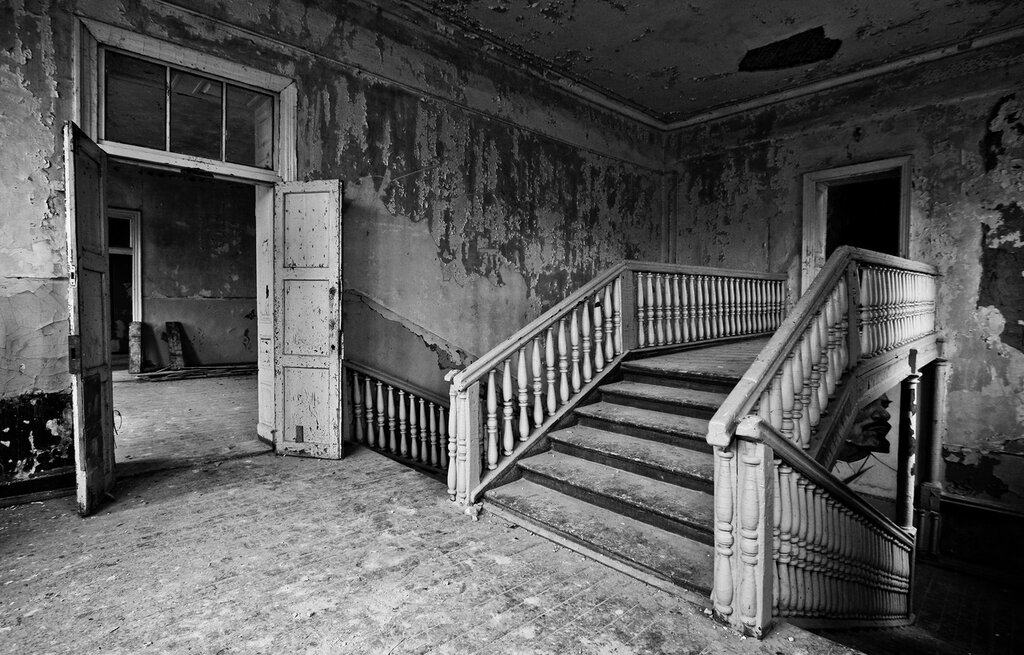 9. Painted butterfly, surrounded by cracks in the paint, makes you think about the boarding school for children with disabilities... 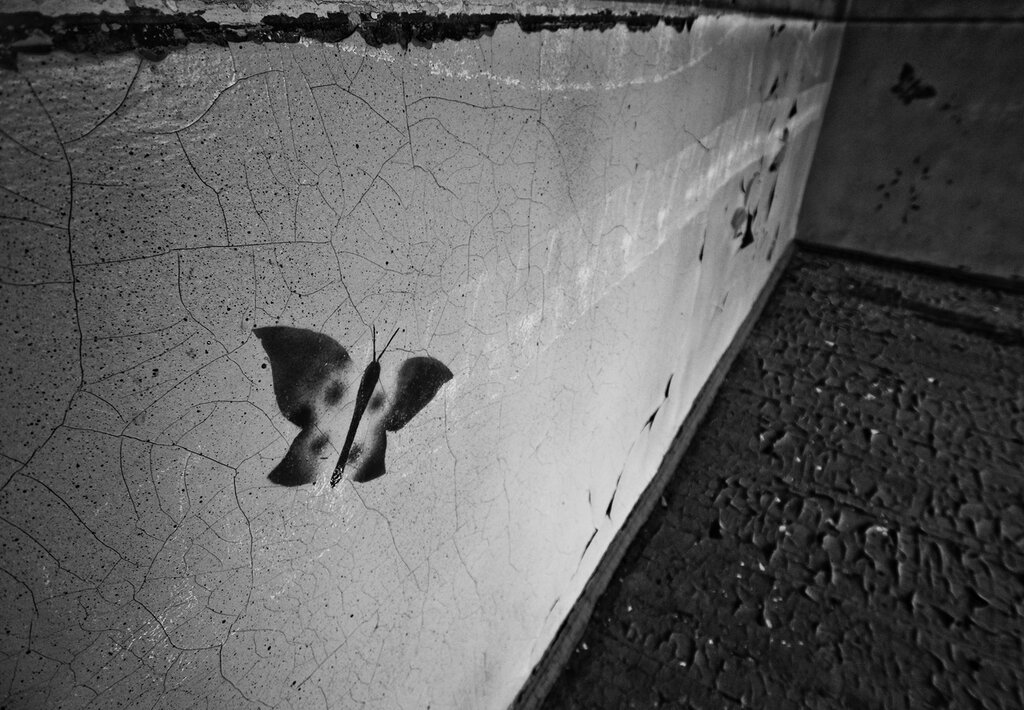 10. Time takes its own, the building gradually deteriorates, the column break. 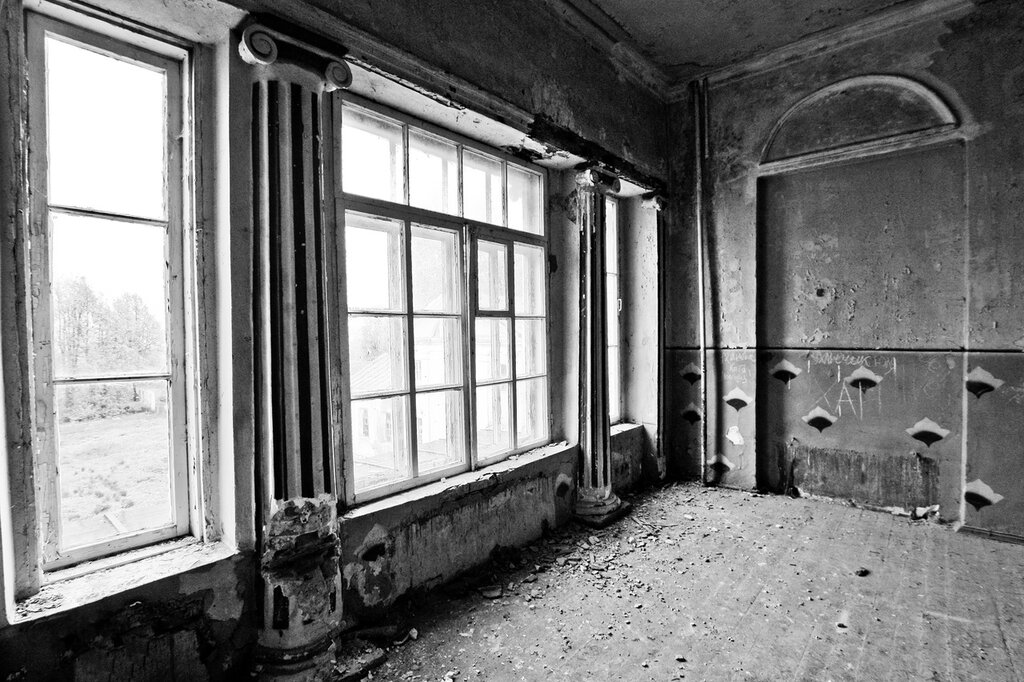 11. On the front of the manor staircase hiding Lenin - from a past epoch. Someone wrote on the side finely "And only Lenin was a good leader...(c)." 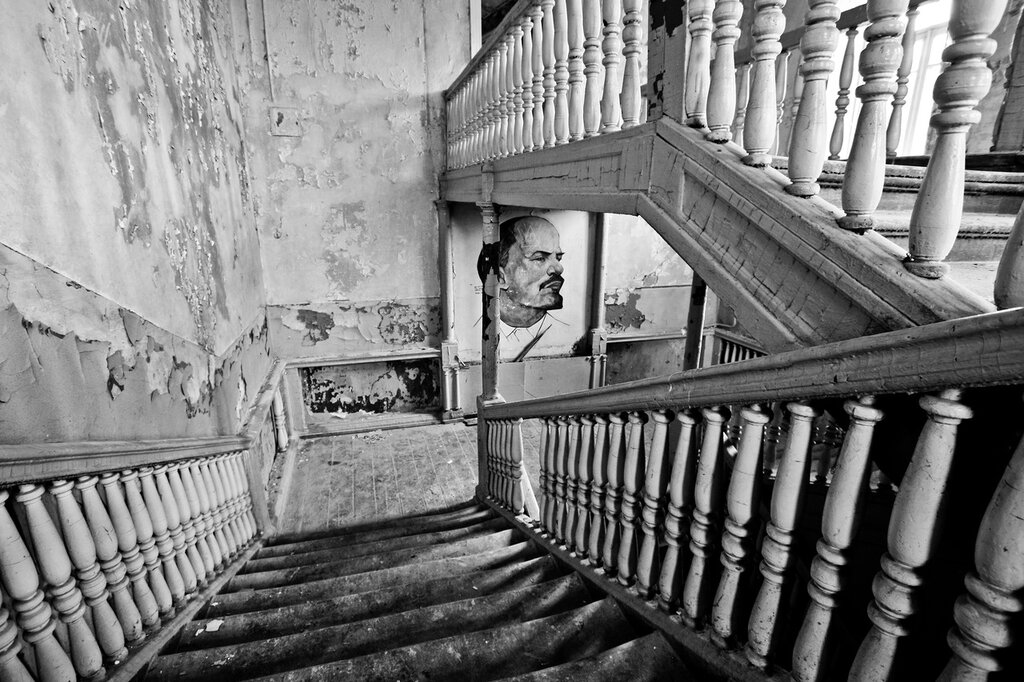 12. Through the open doors of the rooms are viewed from one end of the estates in the other. 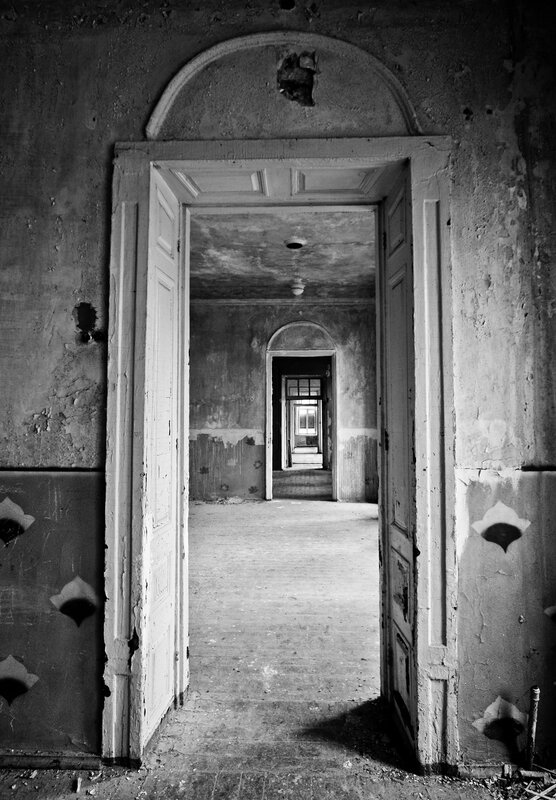 13. A small reminder of the school the past in one of the rooms in the lodge. 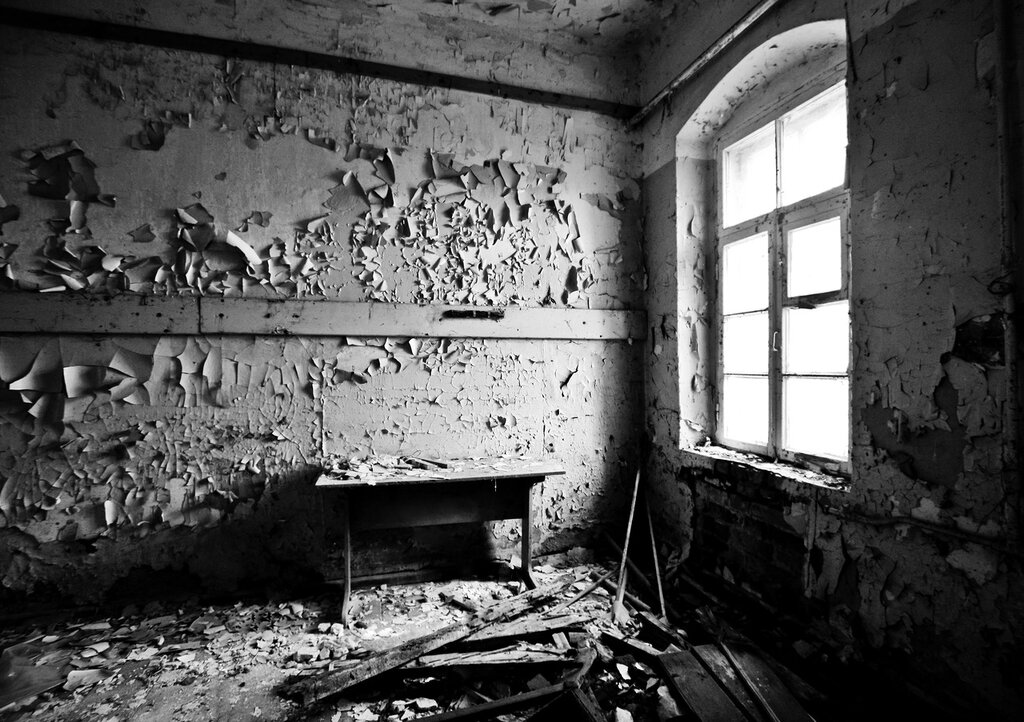 14. Descend back to the ground floor. It seems that the staircase goes nowhere, as in the classic horror films. 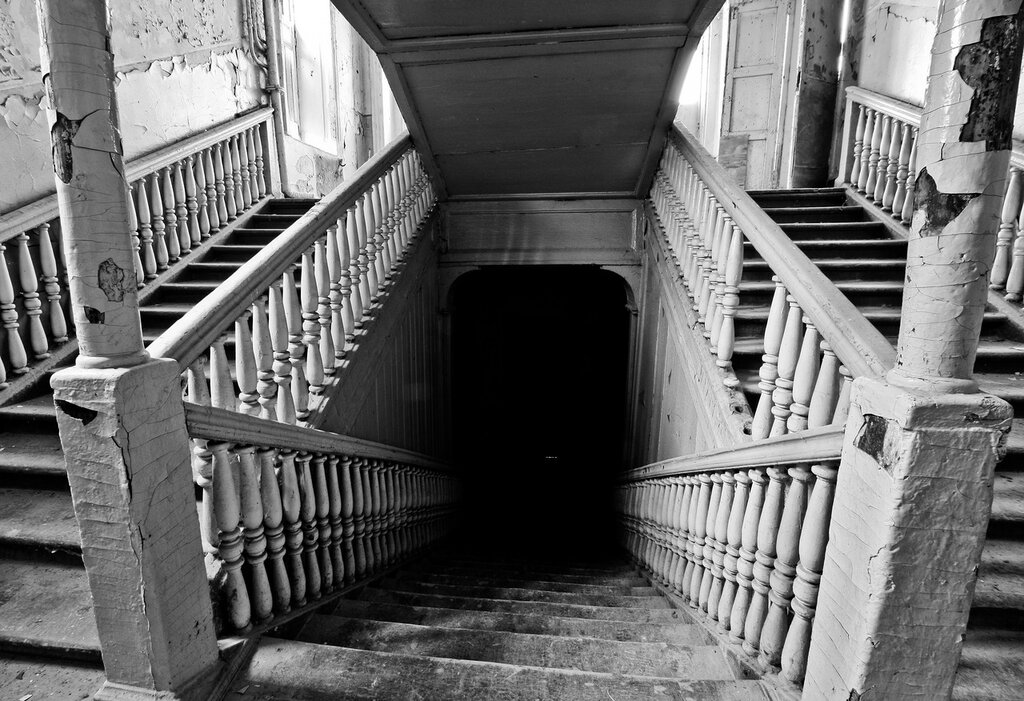 15. Fanciful curves of extracts in the kitchen. 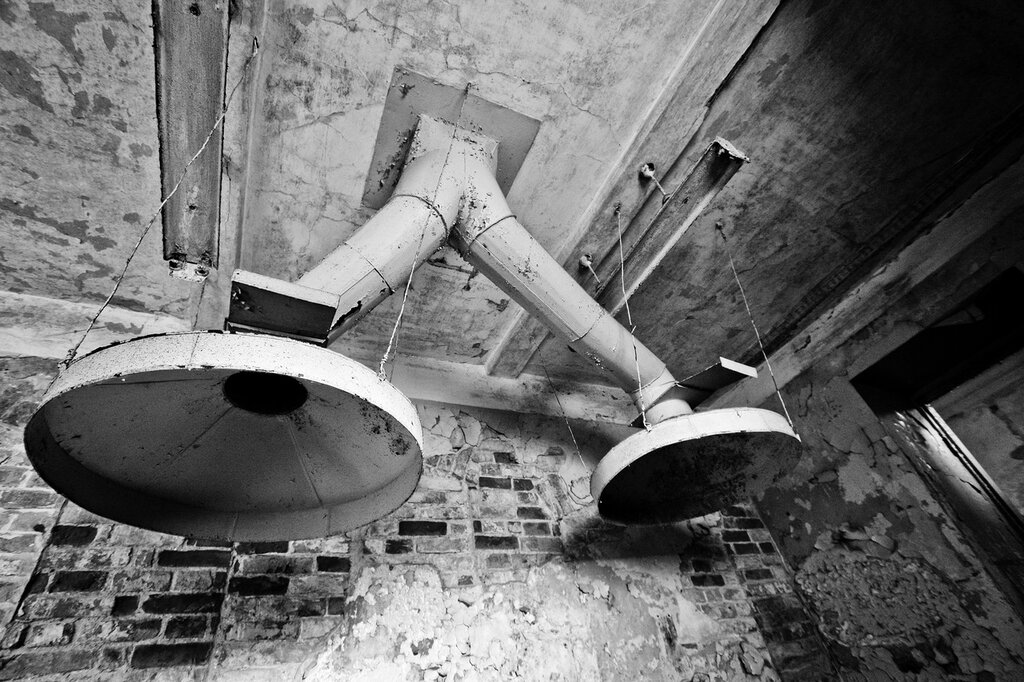 16. Before I go and take a picture again the General plan of the main staircase - is, undoubtedly, one of the main attractions of the estate. 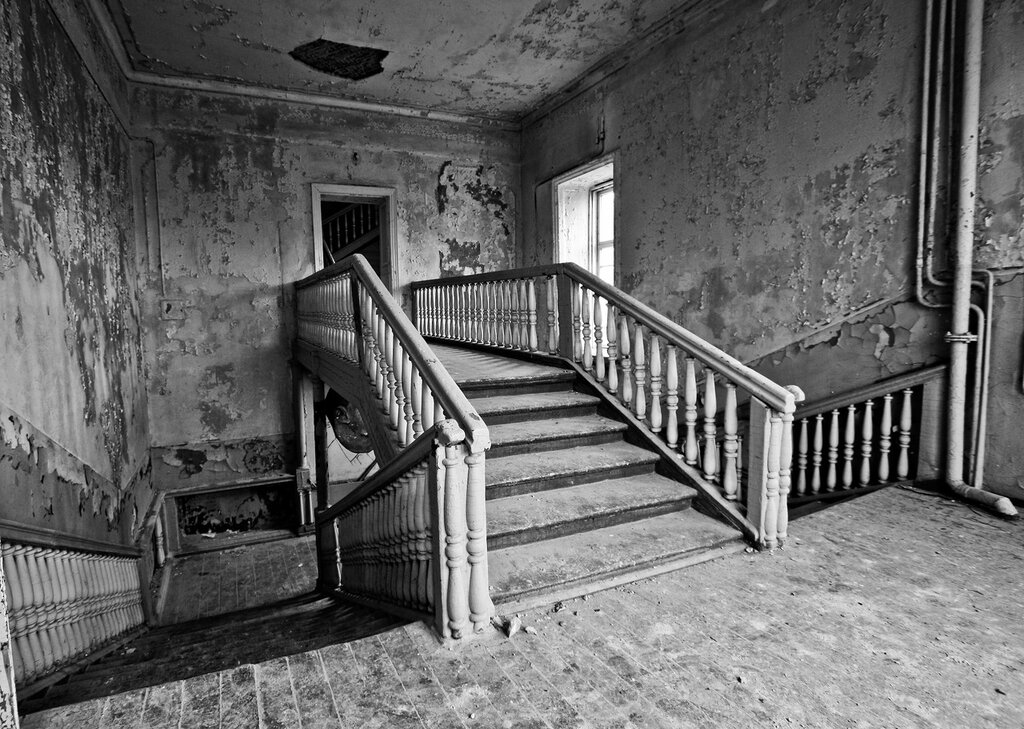 17. Leaving the territory of the mansion, turn around. In the Wake us from a pedestal looks all the same unnamed young man. From his hard glance it becomes uncomfortable. 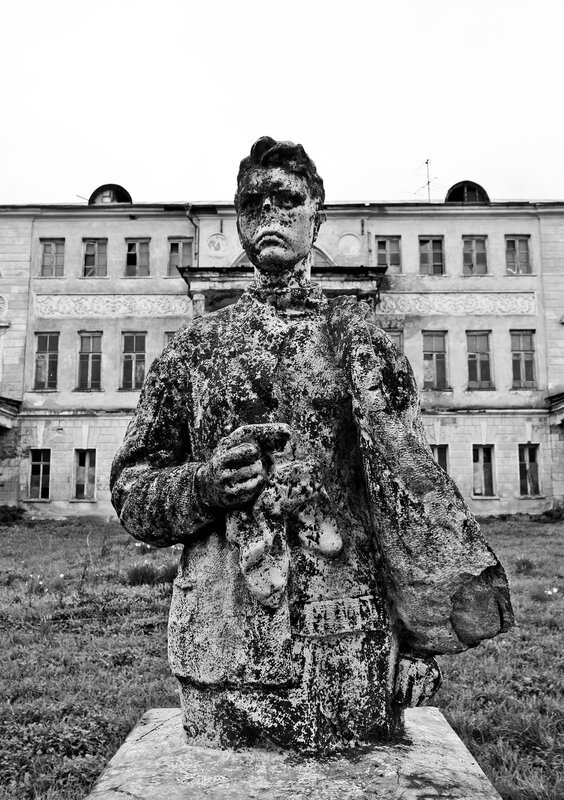 18. The old gates of the estate, and it makes sad grin inscription "access denied". 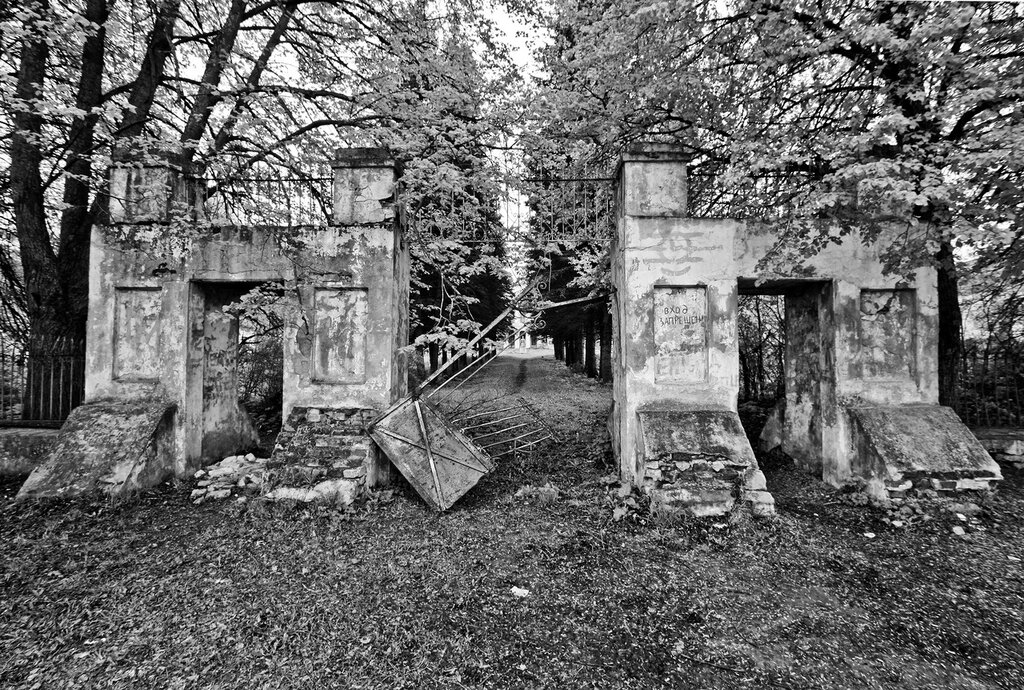 To what unusual and beautiful, and at the same time, several ominous and frightening place. The manor, which has undergone several epochs, what will happen to you then?

P.S. Sorry for my English=)