Abandoned factories, industrial zones, industrial landscapes is one of the most popular directions in the field of urban studies. However, to find a good, catchy and interesting site among hundreds of others - the problem is not so simple. Although this textile factory we were already decided to return. And explore the other part . I don't like to travel several times in one place, but it was worth it. 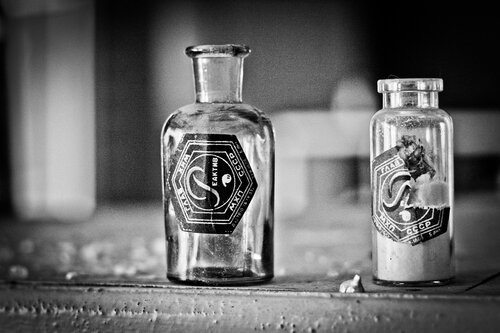 Back in the fall of 2012 . Then there was quite overcast and gloomy weather , but once we were lucky enough to catch a bright and sunny day. It was decided to use it, we packed up and went by train to a distant Moscow region. By the way, in the first trip we "lucky" to get under the shower . Although it added its own atmosphere - in fact almost all housing enterprise interconnected passages. That is, we did not have to walk between the buildings and get wet , and be within the rustle of rain on the roof - it's cool ) But this time it was a bright blue sky , red brick building looked bright in the sun , it was quite warm and cozy. Unlike the first trip, we decided to enter this on the other hand - and visit the factory housing bust with Illich , look at the beautiful pre-revolutionary stairs , walk along the underground catacombs and ancient vaulted cellars , to look into the former church and see another bunch of new and interesting. Plus, the old building and take pictures with laboratories and administrative offices . Throughout the walk around the factory , we met a huge pile of leaves A4 with ominous warnings of protection, but not a living soul throughout the plant we have not seen . Although there was a pair of comrades sitting around the campfire at the gate (but we did not go to them ) . Along the way, we managed to find a couple of very interesting books , so it's myself I can say that the trip was a success .

1. Begin with the former administrative building . Beautiful in the old days , he is now in poor condition. Former front hall ragged and broken , old balusters missing. Just beautiful ceiling, antique tiles on the walls , as well as the place of chandeliers, remind us of the past. But now I will not give him pictures show only found a spiral staircase leading from the basement workshop . 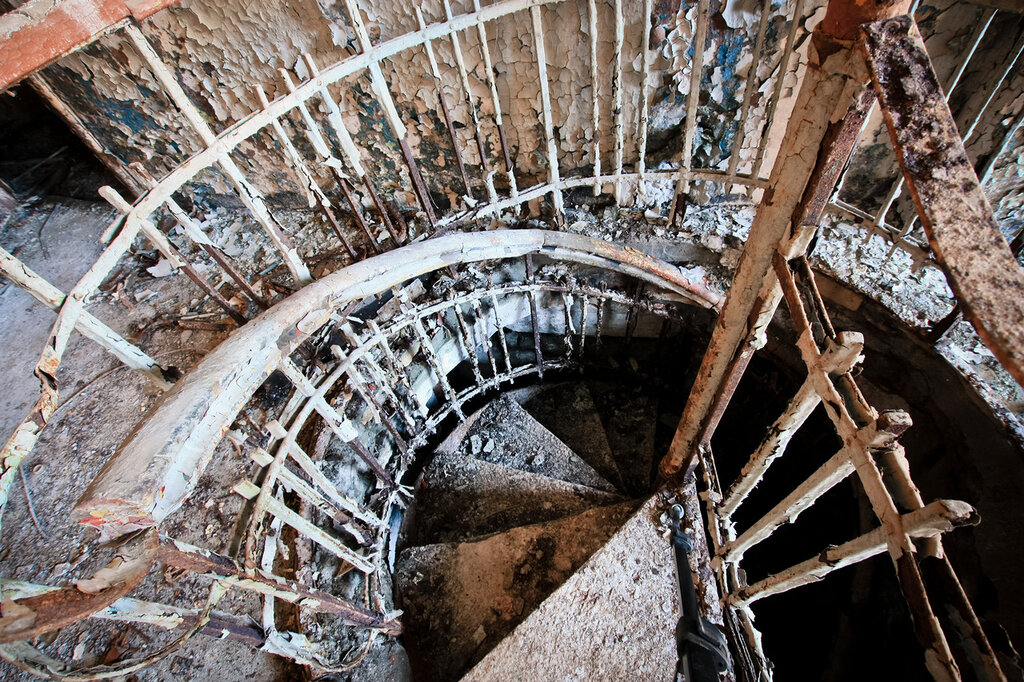 2. Strolling through the body, we often find posters with Soviet slogans.

"For high degree of organization and productivity!"
"No arms race!" 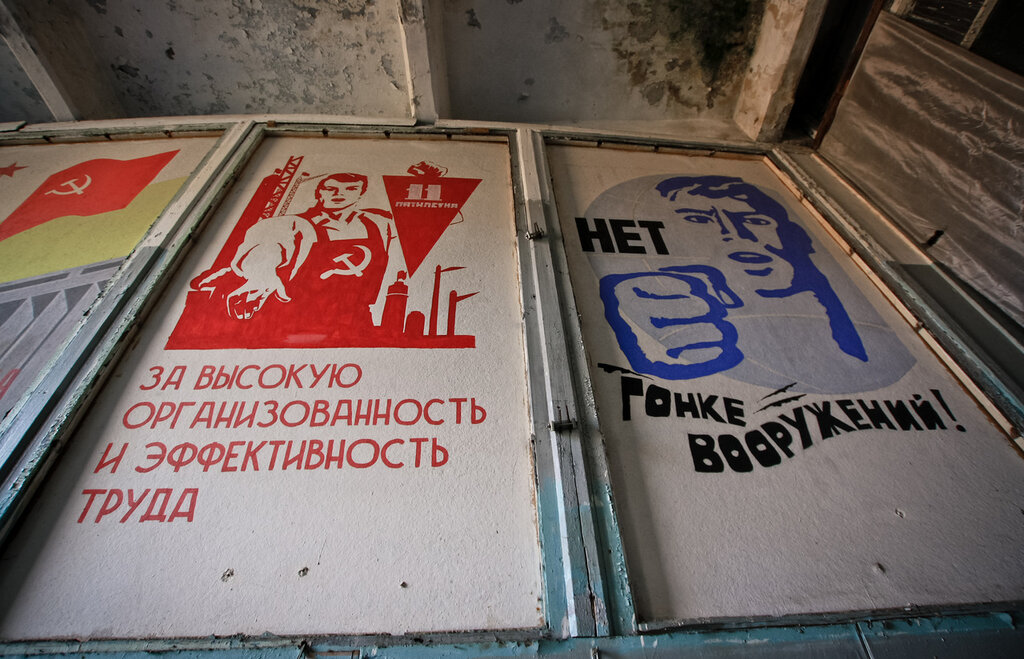 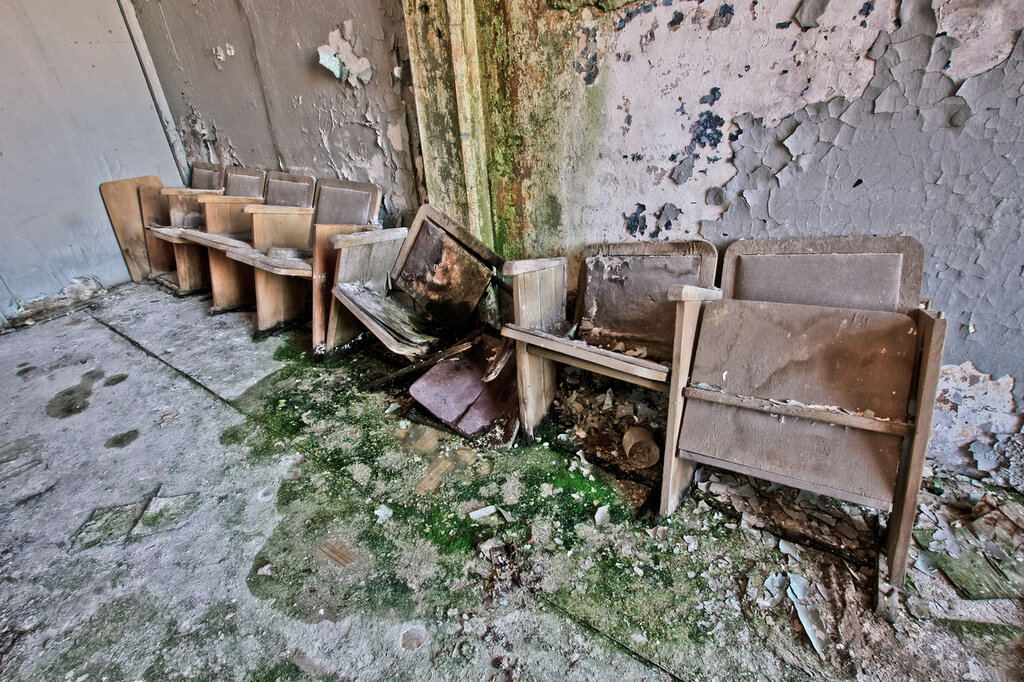 4. Chemical Laboratory is definitely the highlight of this factory. 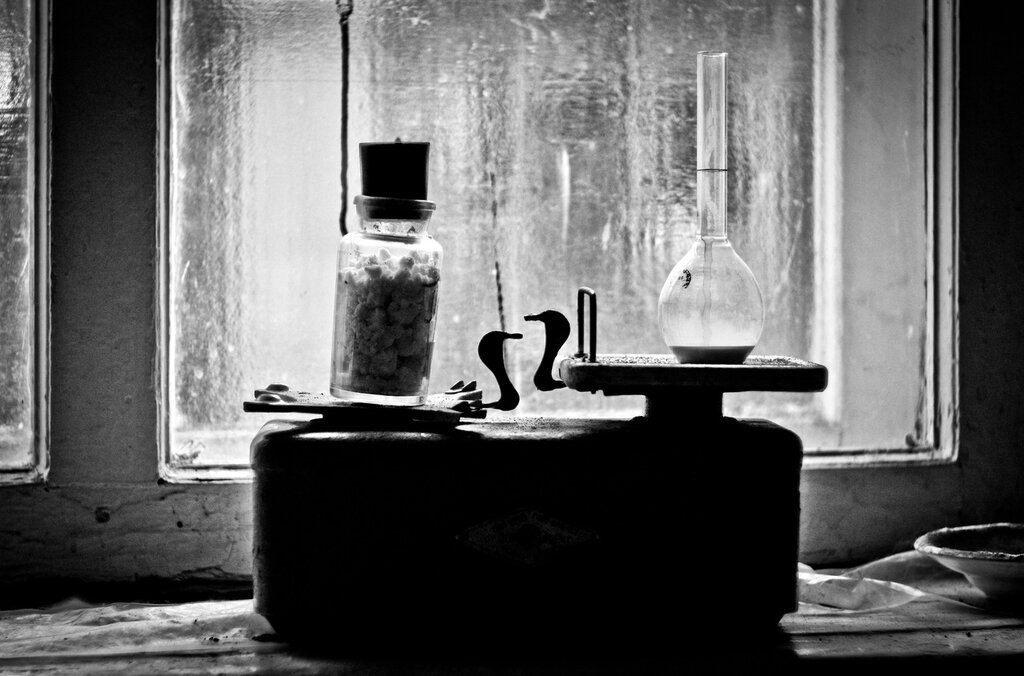 5. Meanwhile, on the street awesome weather. People do not just empty streets and factory nature. Quiet and peaceful, like this feeling. 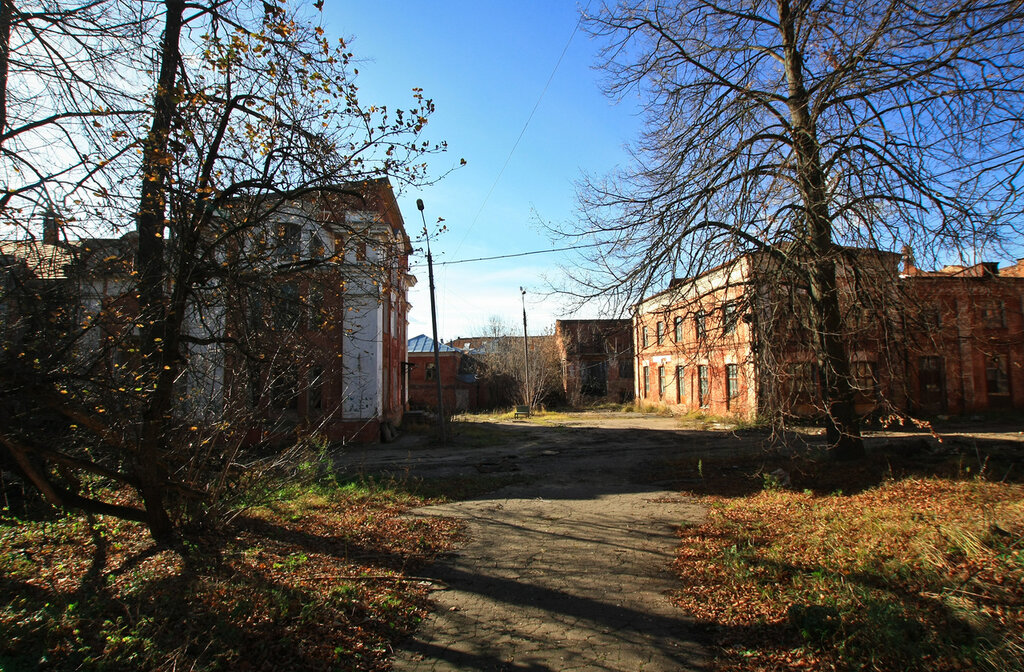 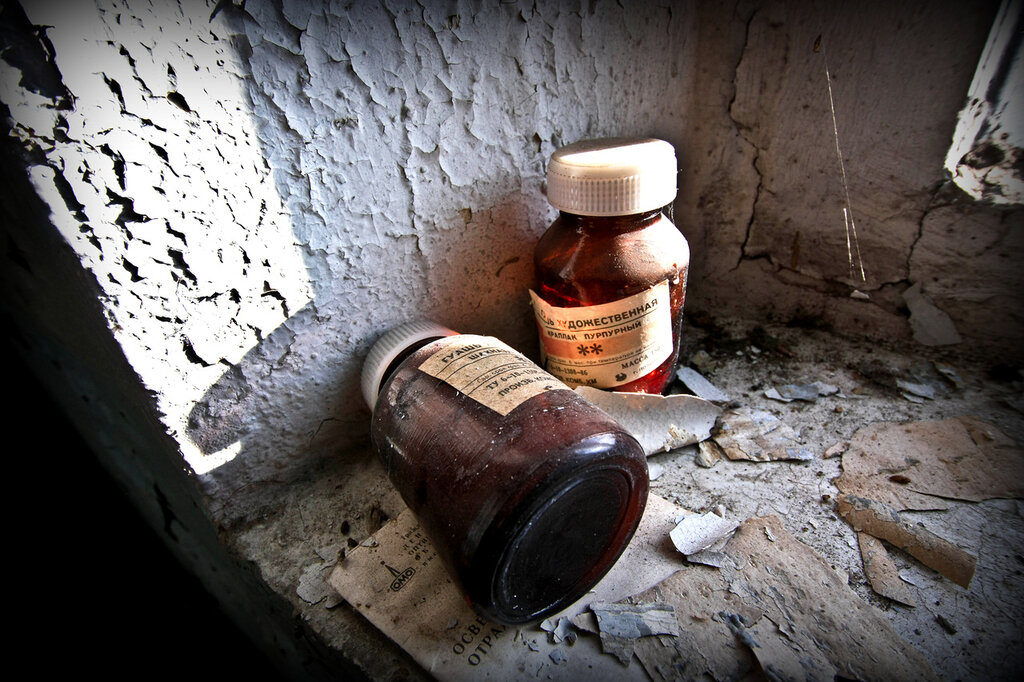 7. Transition between shops mirrors far away from the dining room, so gloomy and wet at that time, this - bathed in sunshine. I love this picture, when the sun's rays illuminate the desert and rusty shop, at least briefly reviving them. 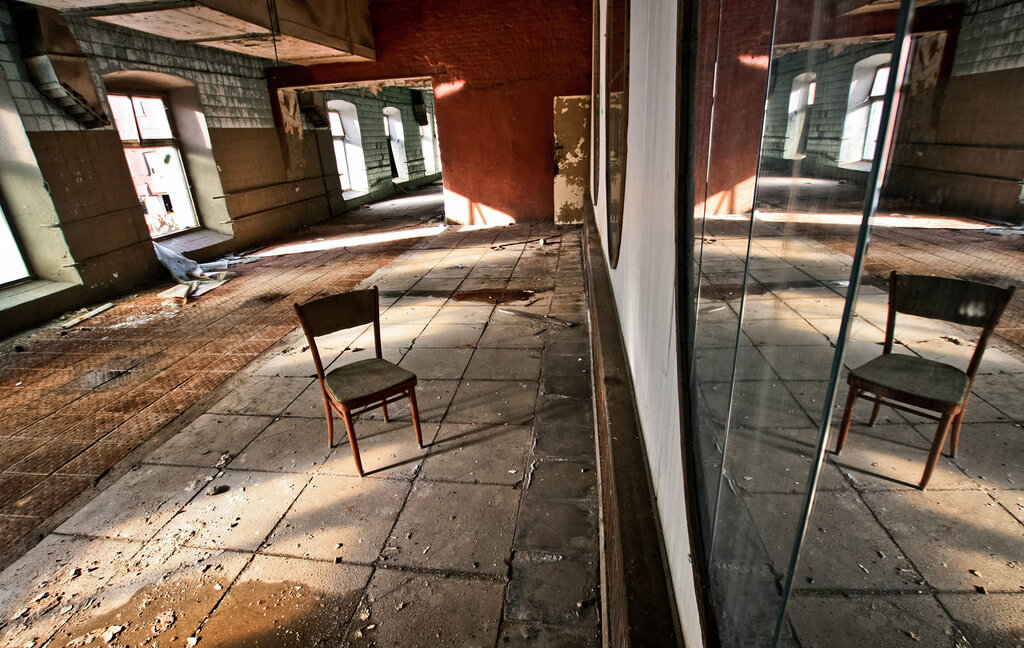 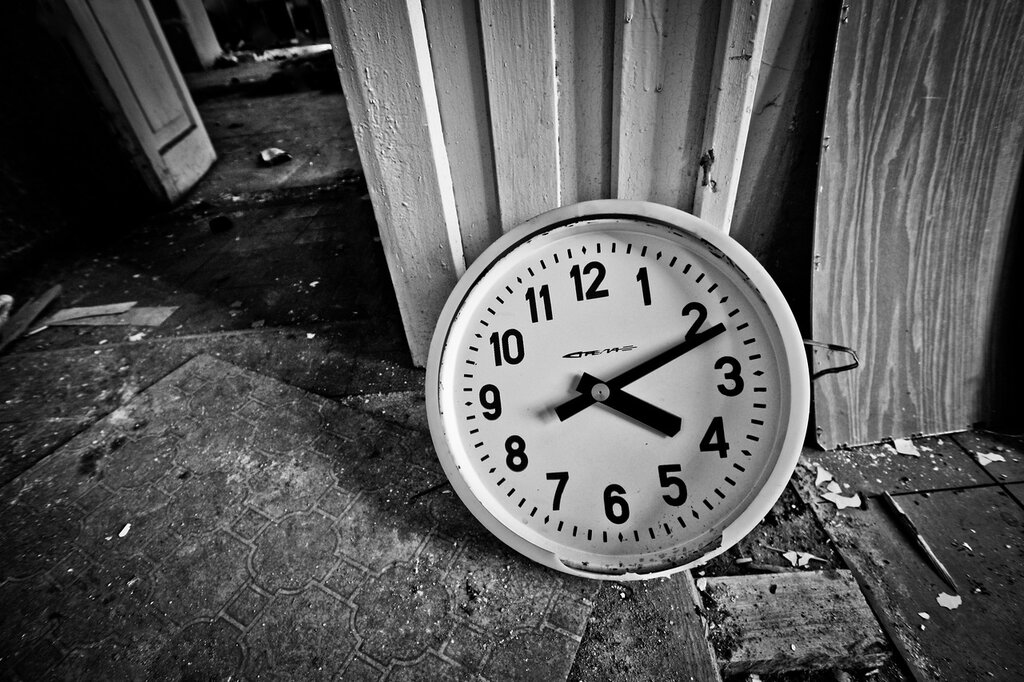 9. Shop endless stretch in all directions. They can just get lost. Entering into one body, out the other, gradually begin to confuse. Given the different floors of all buildings, and the presence of strong remodeled underground and semi-underground parts, struck the industrial scale. 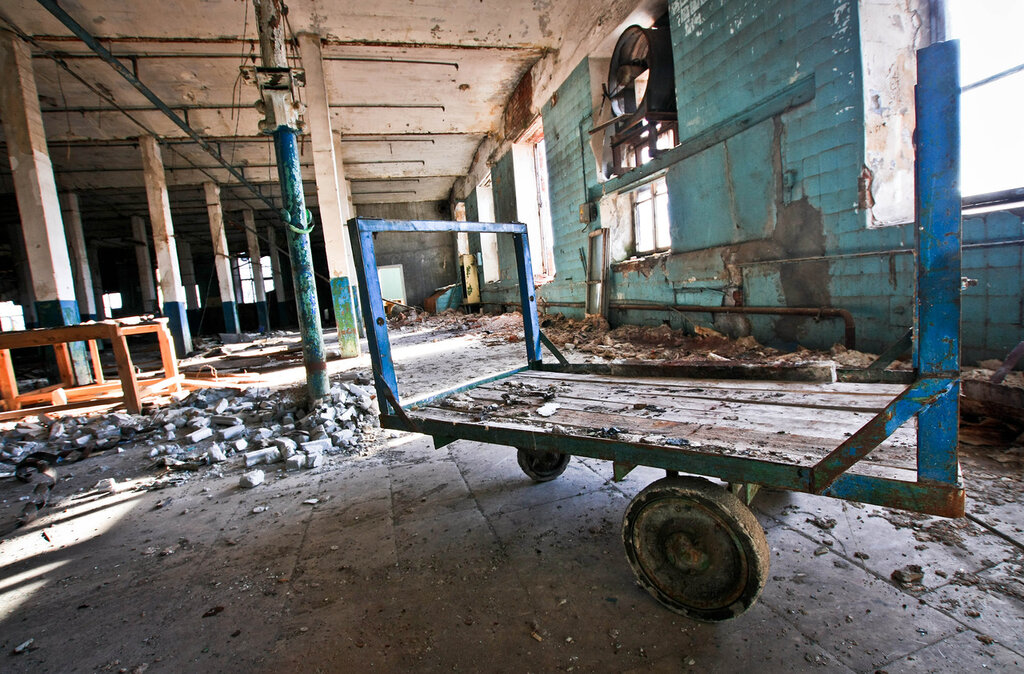 10. Meets and old chemical vessels. Prerevolutionary actually not, but the 40-60th quite a lot. Many bottles with different contents, some - it is better not to open. 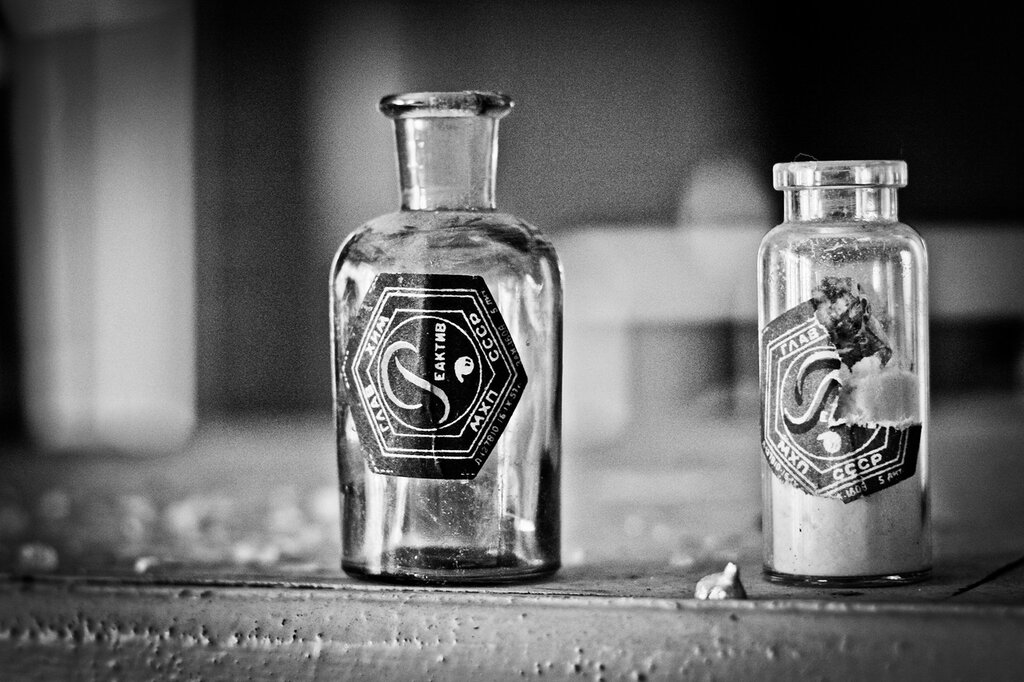 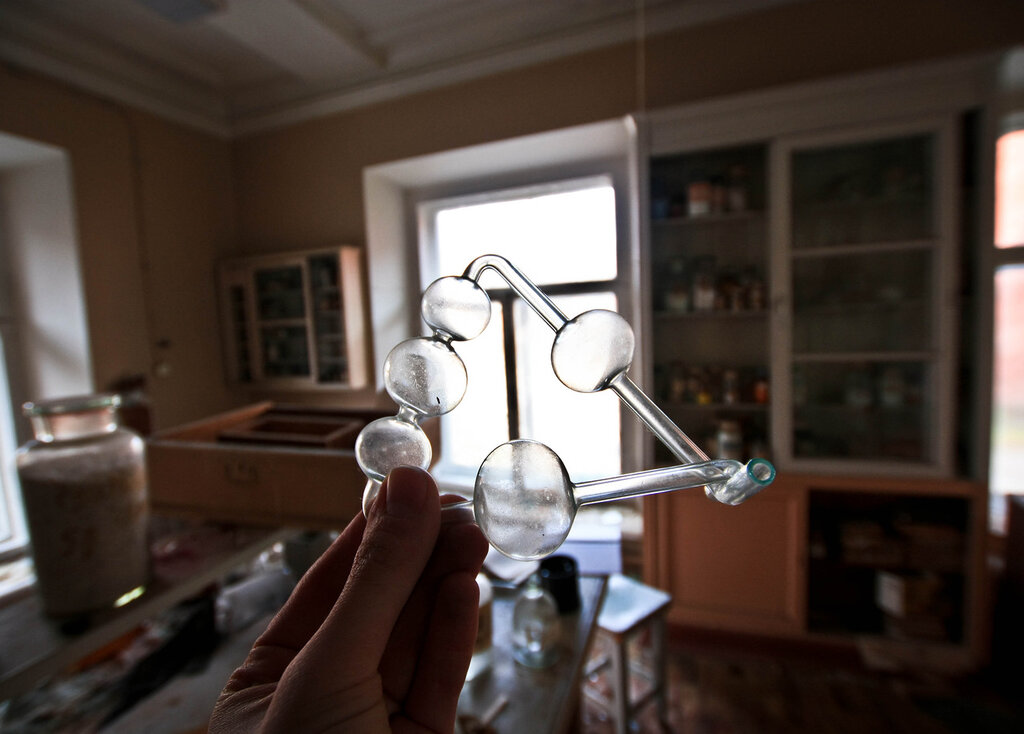 12. The overall architectural style of buildings in a sustained, yet each has its own characteristics. Both outside and inside. 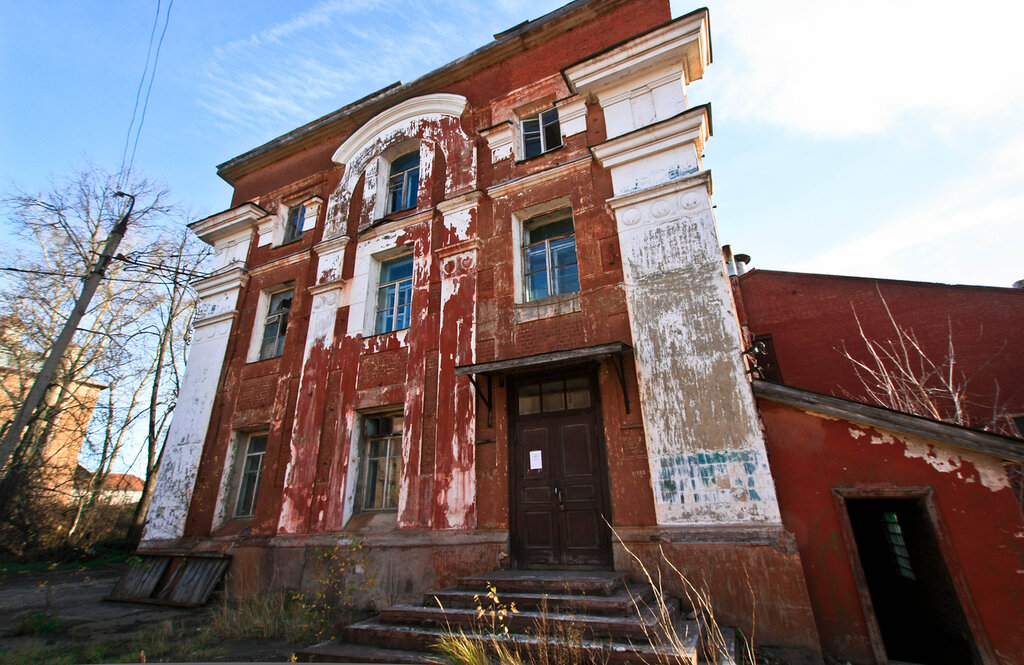 13. The plant has a chemical laboratory for three pretty good level of security. In more detail, I talked about them in the last report. 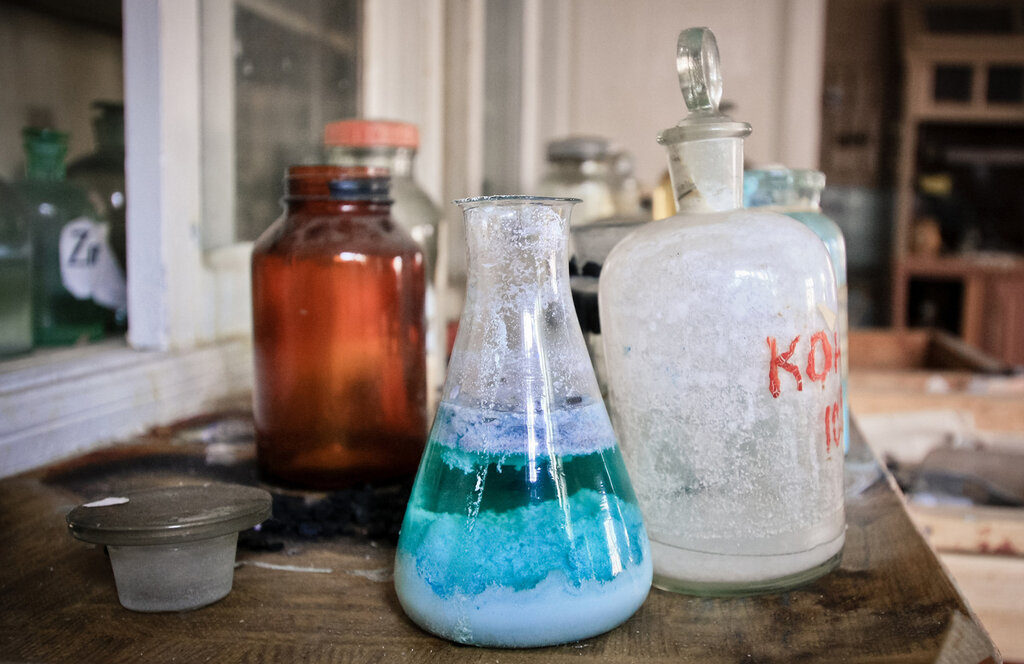 14. These two lamps are very photogenic, is the second time I can not get past them, not photographed) 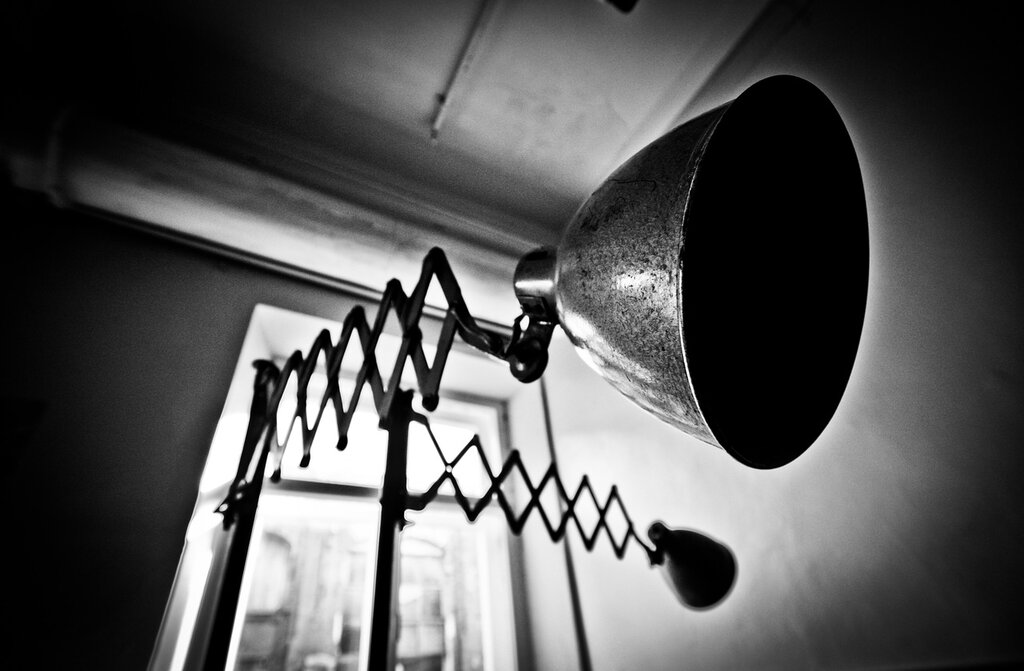 15. You can walk around and on the roofs of old buildings. In some places, it's just some places - yet dangerous. But you can see plenty of local architecture. 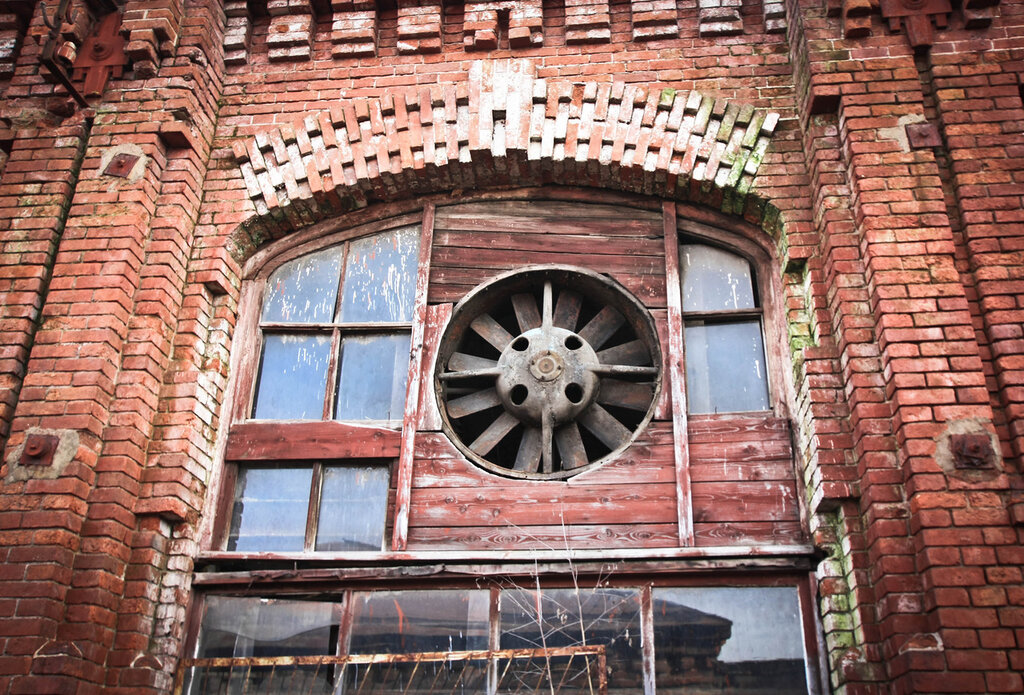 16. Continue the study of the chemical laboratory. 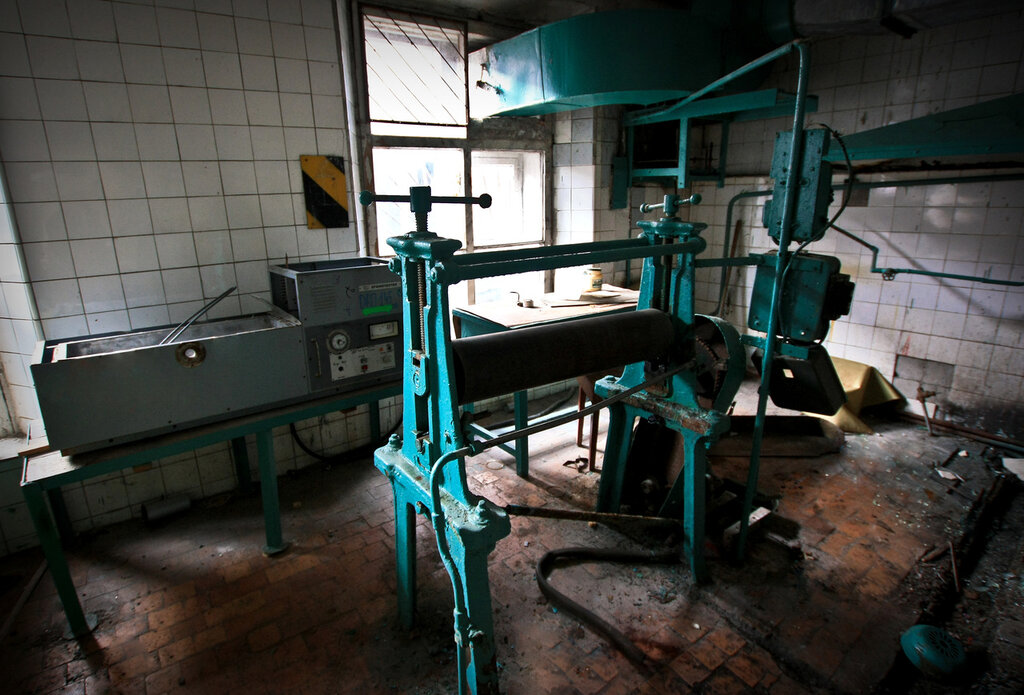 17. Here you can also find huge reserves of pristine new chemical glass. For example, these flasks. 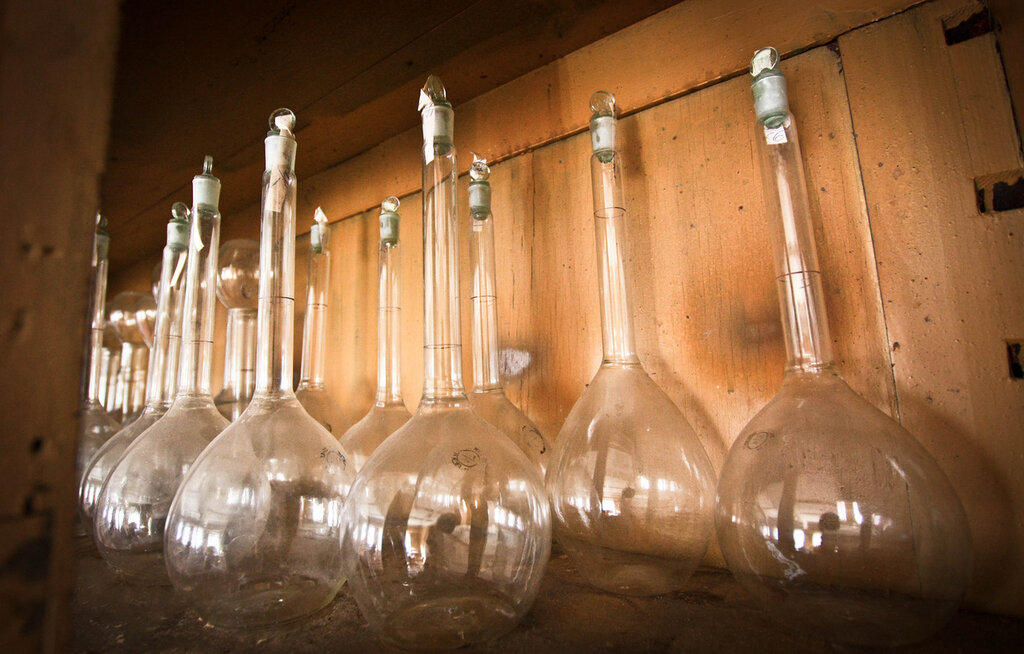 18. Especially colorful look with a shutdown plant equipment. Unfortunately, there was no time to capture the scale carefully, but a couple of frames is still there. Vaulted ceilings reminiscent of the time of construction of buildings. Now here is very damp. All buildings are waiting for the final destruction of either, or as demolition and construction. Unfortunately. 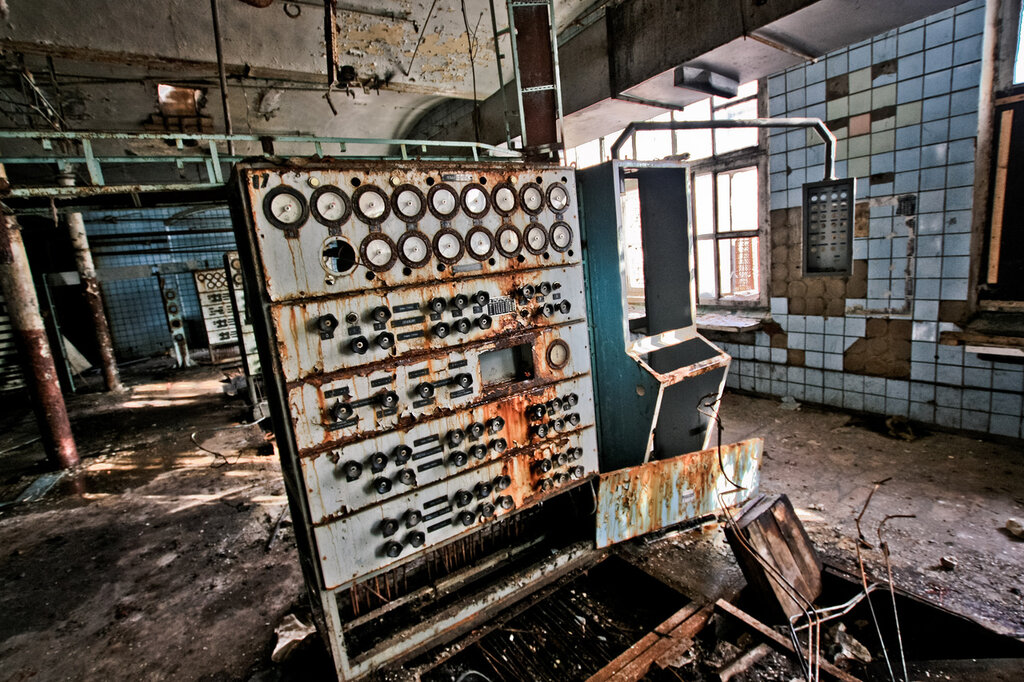 19. In the laboratory, you can find liquid reagents and all colors. 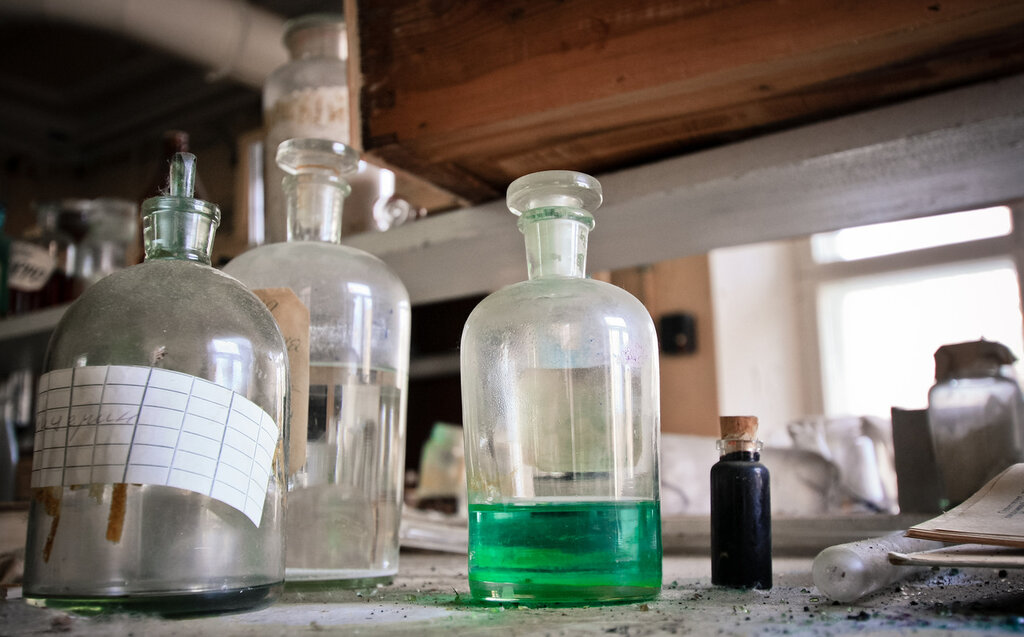 20. Another very strongly hooked place - a former church converted in the Soviet era for storage of paper (!). Even then, researchers have found jobs or just beneath the new paint images of the saints. Looks very unusual and scary. 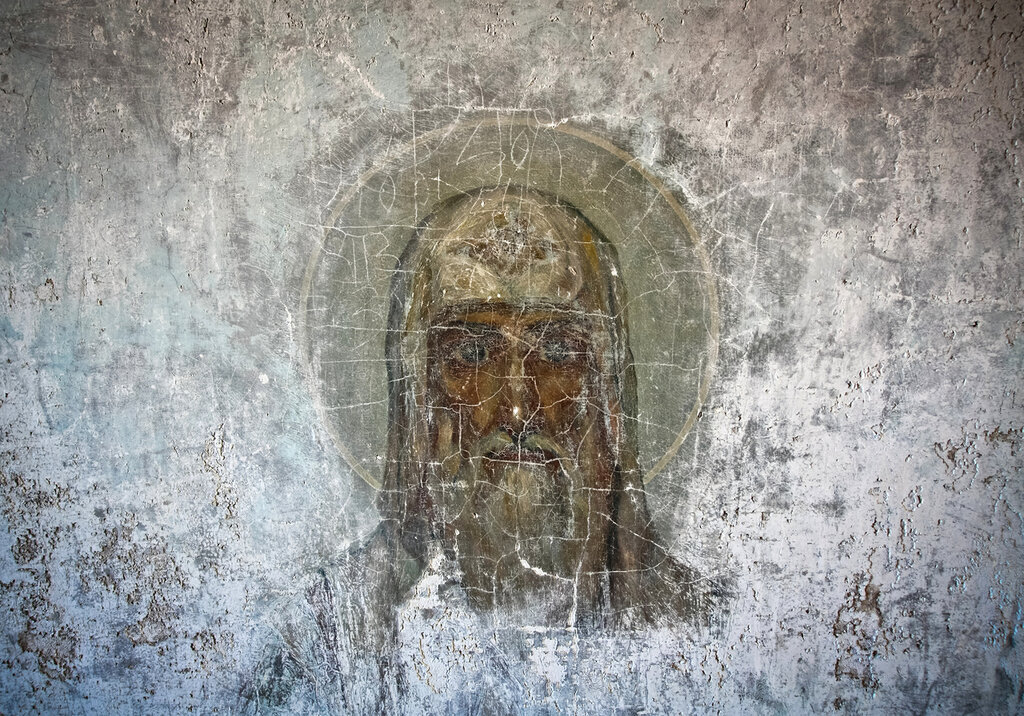 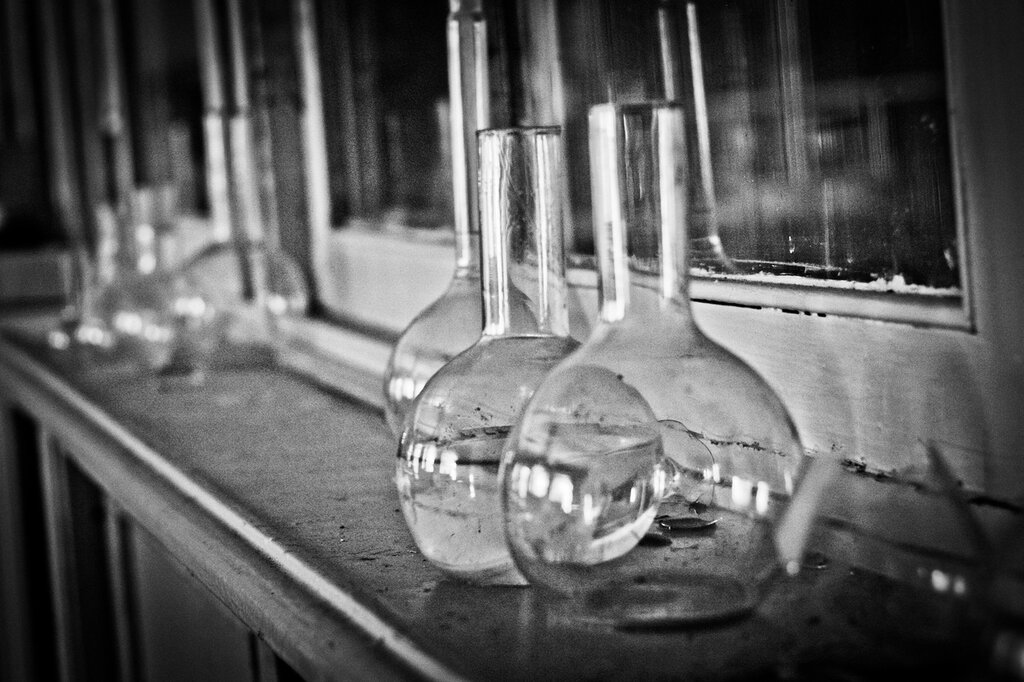 22. During the study, we also found a factory building, which was carried out tailoring. Here it lies with jobs and we got a dummy). I used mannequins on zabroshkah only found in shelters. On the photos I saw of him - apparently because housing costs in depth. 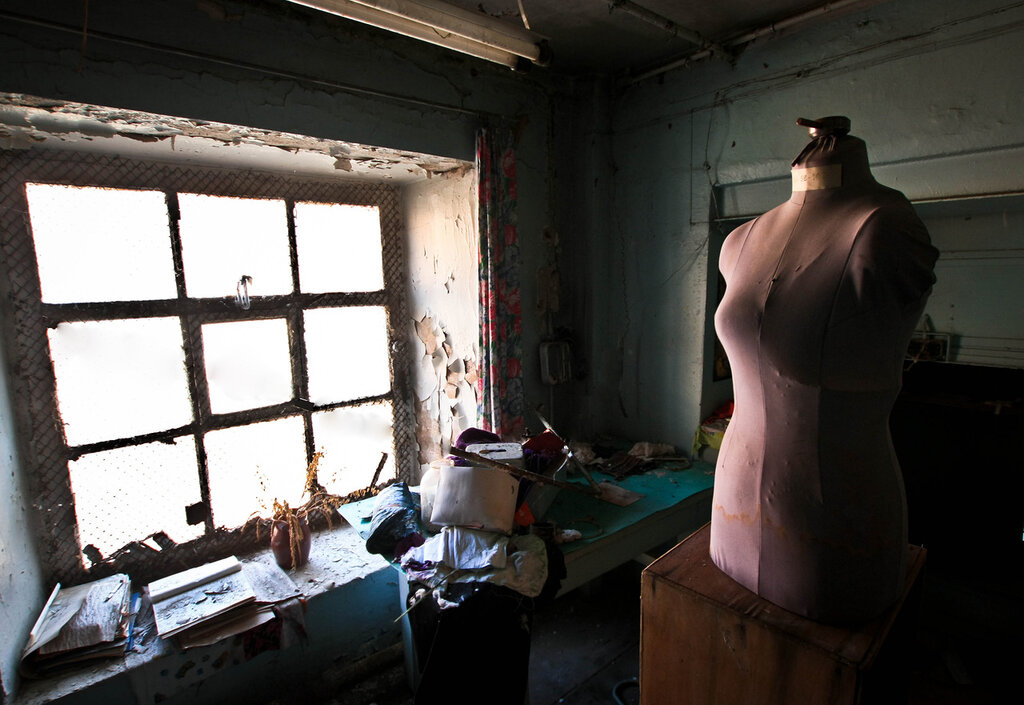 23. "We will provide above-plan profits and strengthen labor discipline!" Now these posters have anywhere and can not be found, a kind greetings from the past. 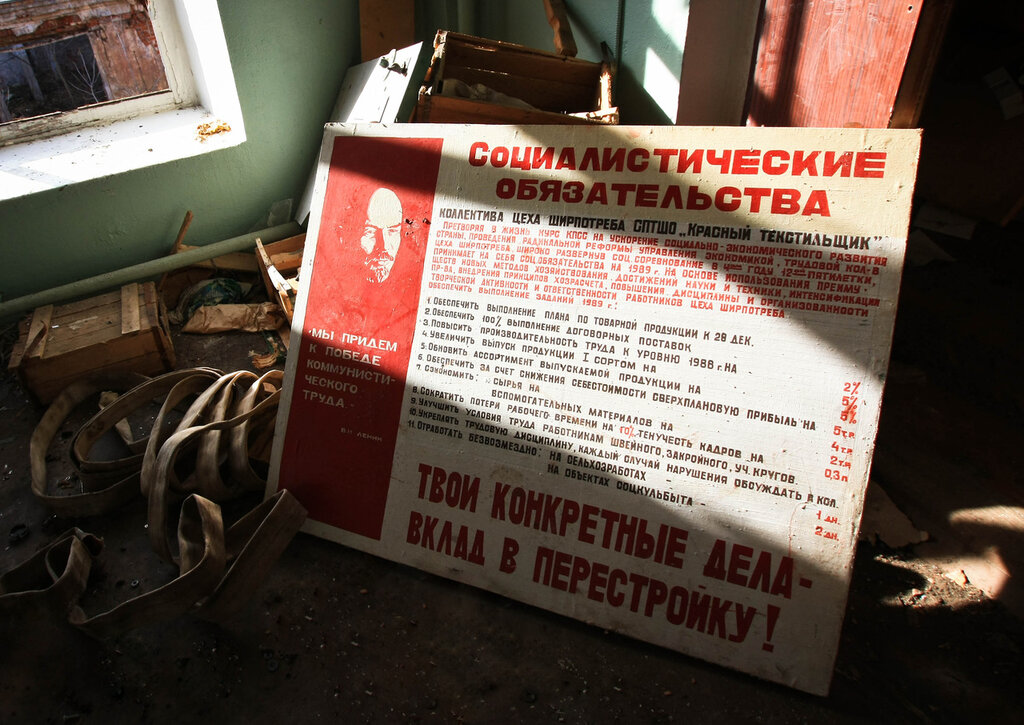 24. Sometimes found on the floors of buildings architectural elements worthy porches in Lviv) is a pity condition and sad fate ... 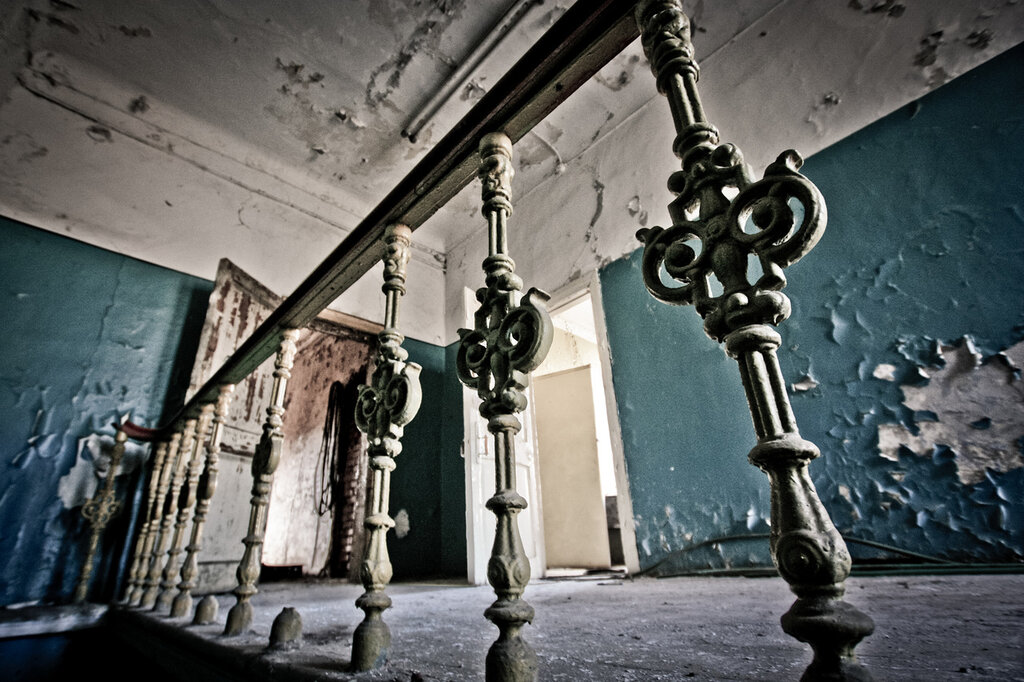 25. Continuing the theme of chemistry and laboratories. 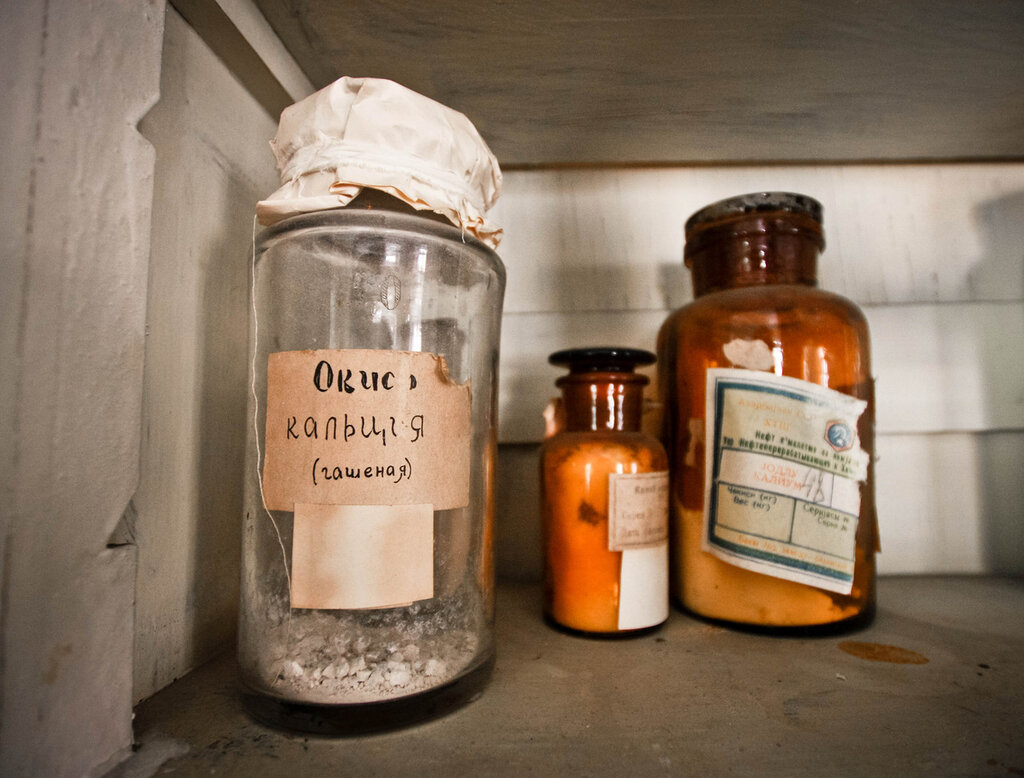 26. All cast and gradually dies. And in the 2000s the plant was held on the wave. Alas, raider seizure reduced to zero every effort to keep it afloat. 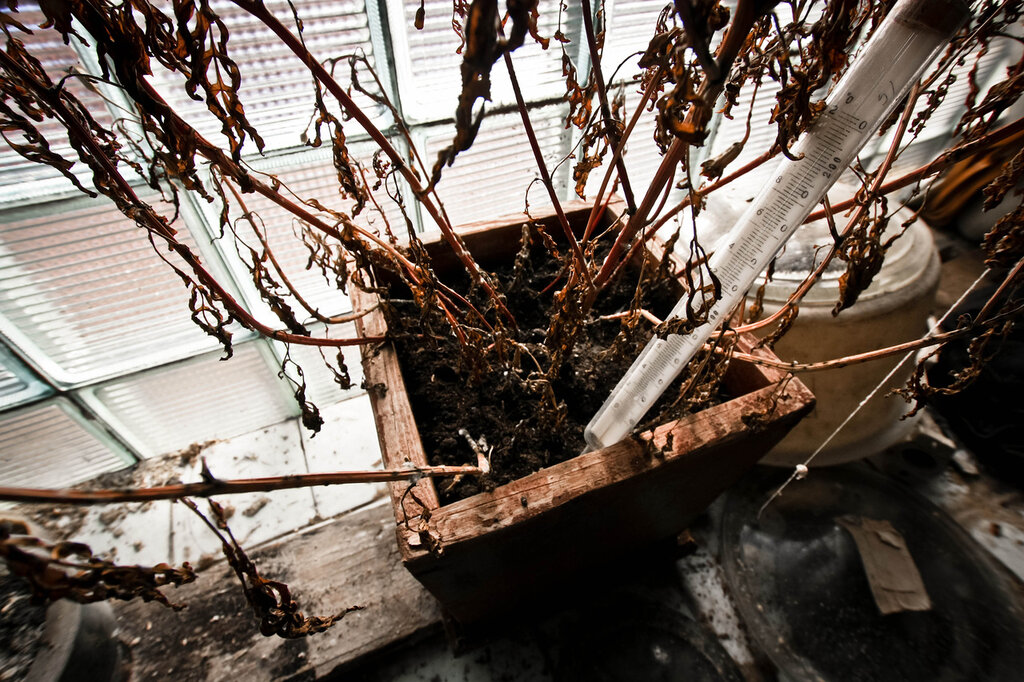 27. In the desert wind howled workshops. 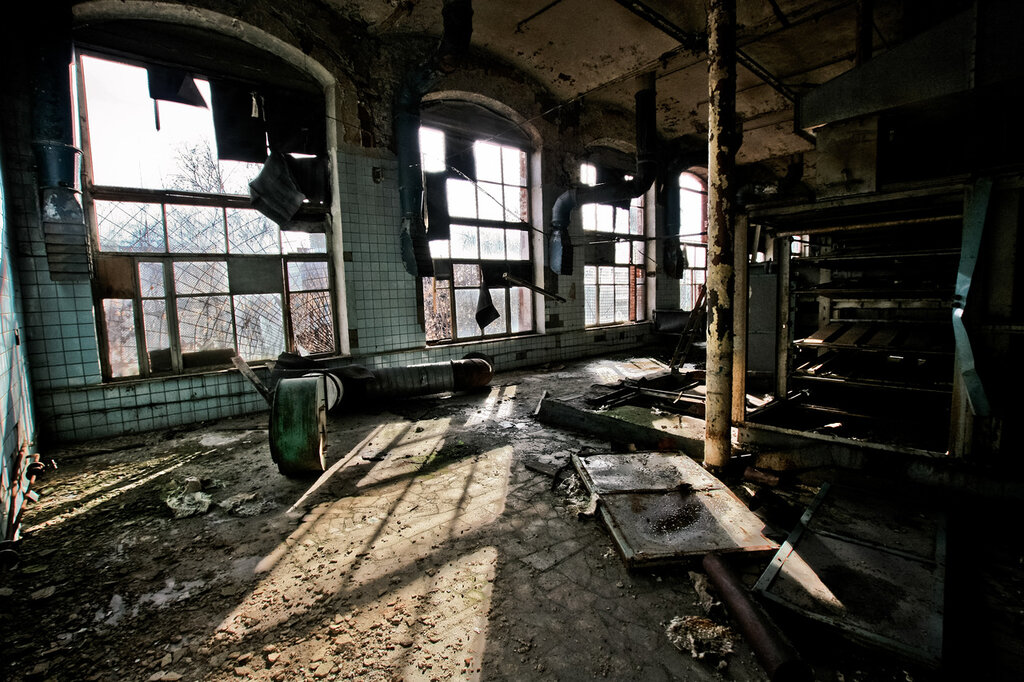 28. But only one time - Lenin's bust in marble. Its dimensions are so huge that it does not just carry and move from place impossible. 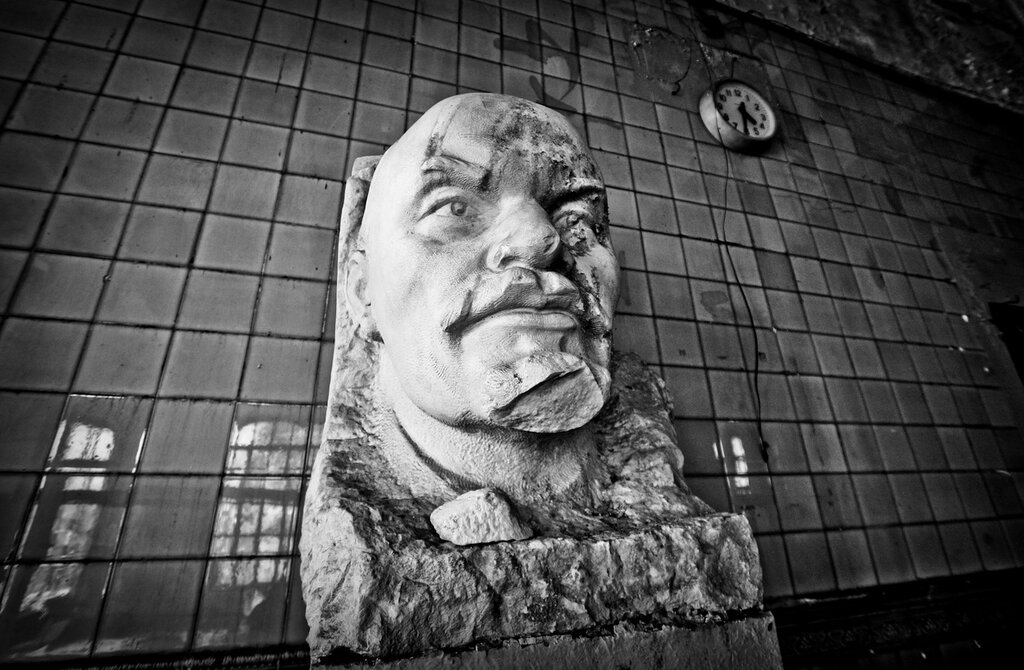 He stands and stares silently at what is happening around. But in the meantime we leave the factory and go home.

Maybe we'll be back here, but plans yet there are a few similar looking objects, which can be fun to walk around and take pictures.